Again this year, the Highlands Current’s award-winning celebration of April as National Poetry Month will extend into May due to the number of people who wanted to take part.

Of 33 poetry lovers participating this year, 13 were newcomers. Twelve readers shared original work, beginning with Leonora Burton, owner of The Country Goose, reading “Marmite,” a poem by one of her customers, Melanie Campanile.

Other selections spanned generations and crossed boundaries. Among the younger readers, Noah Bingham honored Shakespeare with an impressive performance of Puck’s speech from A Midsummer Night’s Dream (April 9), Alex Danilov shared his own “Ode to Dark Chocolate” (April 23), and Chloe Rowe reminded us why kids have more fun than grown-ups with her rendition of Shel Silverstein’s “Dirty Face” (April 11). 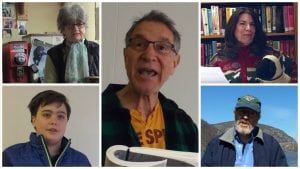 The oldest poem came from Anita Peltonen, who read verses translated from the Kalevala, the Finnish epic that existed for centuries in oral form before it was written down in the 19th century. Other international selections included “The Cinnamon Peeler” by Michael Ondaatje, read by Beth Vardy (April 3); “Lot’s Wife” by Wislawa Szymborska, read by Richard Cogliandro (April 7) and Pablo Neruda’s “Ode to Broken Things” read by Christine Simek (April 8).

Beacon’s Poet Laureate Thomas O’Connell connected poetry and April to baseball with “Dream of a Baseball Star” by Gregory Corso (April 21). The series closes with “The Poem You Asked For” by Larry Levis, read by Tom Carrigan (May 3).

The videos, plus those from 2014 and 2015, have been archived. Thanks to all those who participated and watched, to Greg Gunder and Chip Rowe for making it all work and to Kate Vikstrom for sparking the original idea.