Into the Arms of Strangers, which in 2000 won the Academy Award for best documentary, will be shown at the Desmond-Fish Library in Garrison at noon on Saturday, April 30, by the Philipstown Reform Synagogue. Narrated by Judy Dench, the film records the extraordinary effort that saved 10,000 Jewish children from the Nazi Holocaust during World War II. Called the kindertransport, the children were brought by train and boat from Germany and other nations under Nazi control to England. 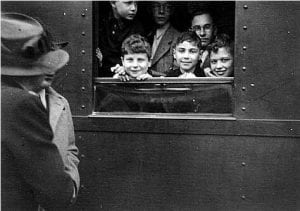 A photo from the documentary.

The film will be preceded at 11 a.m. by a service led by Rabbi Helaine Ettinger. A discussion will follow the film, including comments by Henry Stern, whose brother was saved by the kindertransport, and a short personal film of the memories of the kindertransport that a friend of the Sterns recorded prior to her death.

The free screening commemorates the annual remembrance of the Holocaust, or Shoah. For more information, email synagogue president Cathy Duke at [email protected]