The Manhattan District Attorney’s office is looking into the committee’s conduct during the latter stages of two Democratic state senate races in 2014. In October of that year the committee distributed hundreds of thousands of donated dollars raised largely in New York City to the campaigns of then-state senator Terry Gipson, who represented District 41, which includes Philipstown and Beacon, and senate candidate Justin Wagner, who was running for the District 40 seat, which includes eastern Putnam County.

The money in question came to the committee from fundraising efforts by aides and associates of New York Mayor Bill de Blasio. The mayor made clear in 2014 his goal of obtaining a Democratic majority in the Senate to further the city’s agenda. The Manhattan DA’s investigation also includes the involvement of other county Democratic committees as well as the mayor’s office, professional fundraisers and campaign consultants.

The New York Times reported on Thursday (April 28) that several people associated with the mayor and the investigation had received subpoenas. 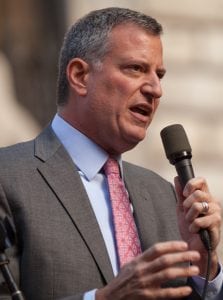 The district attorney’s probe began after the state Board of Elections referred the matter for prosecution with a report that concluded aides and associates of de Blasio had engaged in a coordinated effort to raise the money and distribute it through county committees. This was done, the board had concluded, in an effort to circumvent campaign contribution limits and disguise the names of contributors.

“I have determined that reasonable cause exists to believe a violation warranting criminal prosecution has taken place,” wrote Board of Elections Chief of Enforcement Risa Sugerman in a document leaked to the New York Daily News and The New York Times. “The violations discovered by this investigation can only be described as willful and flagrant.”

State law limits the amount of money to $11,000 per general election cycle that individuals or groups can donate directly for a state legislative race. County committees, however, can receive contributions up to $109,600 from a single source. They also are not limited in how much they can contribute to a candidate but are not permitted to accept donations that are earmarked for a particular candidate.

According to published reports, the Putnam Democrats contributed $273,750 to Gipson’s 2014 campaign and $367,000 to Wagner’s campaign. Both of these races involved districts that cross Putnam County. (The Democrats had never raised more than $10,000 for an election in the decade prior to 2014.) Gipson lost his seat to Republican Sue Serino but has announced he will challenge her again this fall. Wagner lost to Republican Terrence Murphy, who was among those who complained to the state Board of Elections and who says he has asked Putnam County District Attorney Bob Tendy to investigate. 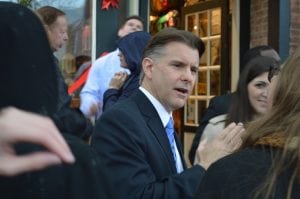 Then Sen. Terry Gipson in Cold Spring in May 2014 (file photo by Michael Turton)

Two Putnam County Democratic Committee officials contacted by The Current declined to comment, citing the ongoing investigation, and referred further inquiries to an attorney representing the organization. Margaret Yanco-Haines, a Philipstown resident and third vice-chair of the committee offered a statement attributed to attorney Justine A. Harris:

The contributions the committee received and the expenditures it made were in full compliance with the law. There was no intent to evade individual campaign finance limits, and the Committee accurately made public disclosures of each contribution and each payment by filing the appropriate reports with the BOE [Board of Elections]. The Committee is cooperating fully with the investigation.

Ken Harper, the chair of the Putnam County Democratic Committee, took essentially the same position in an email to The Current. He added that the Manhattan DA’s office had asked the committee not to comment on the investigation. Harper also offered a copy of a legal memorandum sent to the state Board of Elections written by election law attorney Laurence D. Laufer on behalf of several parties in the investigation challenging the BOE’s conclusions.

The Laufer memo argues that the state election law contemplates various entities and individuals, including state and county political party committees, working together to elect candidates representing a particular party. Laufer further asserts that committees are permitted to make unlimited contributions to candidates it decides to support.

“It is hard to conceive how a political party committee choosing to participate in the party’s statewide effort to help elect the party’s slate of candidates to the state Senate could be characterized as a mere straw donor in a conspiracy unless you found evidence that the committee’s officers and members were held hostage and forced to deposit and disburse funds at gunpoint,” Laufer wrote. “I am guessing that’s unlikely.”

The Manhattan District Attorney, Cyrus R. Vance, will have to determine whether sufficient evidence exists to make a case for conspiracy to evade campaign laws involving a broad swath of political participants or whether the actions taken in public view and filed with the Board of Elections in 2014 rise to the level of criminality or violations of law.

Furthering complicating matters are questions raised as to the fairness of the BOE findings by Sugerman, an appointee of Gov. Andrew Cuomo, against Mayor de Blasio, with whom Cuomo has been at odds for some time. Sugerman’s report did not mention the Democratic state committee, over which Cuomo has influence, which also received funds raised for state senate candidates from the same sources.