Five individuals — actually, make that four — will run for three open seats on the nine-member Beacon City School District Board of Education. The election is Tuesday, May 17.

Incumbent Tracy Antalek Everett and first-time candidates Meredith Heuer, Michael Rutkoske and Antony Tseng are running. Kristan Flynn filed to run before the April 27 deadline but withdrew her candidacy the next day.

In addition to Everett’s seat, those held by Christine Galbo and board president Melissa Thompson will be contested. Galbo and Thompson are not running for re-election. 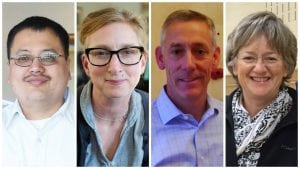 Everett, who works in human resources for Volvo, is completing her first term on the school board.

Heuer, a photographer, is the chairperson of the Beacon Arts & Education Foundation and a member of the Advocates for Beacon Schools.

Rutkoske is a capital asset program manager for Entergy Corporation. He is the husband of Melissa Rutkoske, who last year filed a petition with the state Department of Education seeking the dismissal of then-superintendent Barbara Walkley and school district attorney Michael Lambert.

Tseng is an environmental engineer with the U.S. Environmental Protection Agency and a Beacon Volunteer Ambulance Corps EMT.

The Current will run detailed interviews with each of the candidates in the May 6 issue. The three winners will join the board at its organizational meeting in July.

In addition to deciding the board seats, voters on May 17 will be asked to approve the 2016-17 district budget, which includes nearly $67 million in spending offset by $36.6 million in tax revenue and $26.8 million in state and federal aid. The budget maintains all existing programs and staff and offers modest salary increases while staying within the state-mandated tax cap.

The tax cap requires school districts and local governments to raise property taxes each year by no more than 2 percent or the rate of inflation, whichever is less. This year’s cap was 0.97 of one percent, the lowest it has been in years.

Voters will also decide whether to allow the district to spend $385,000 on three 72-passenger buses and a 20-passenger van.