Interviewed by students about human rights

On Tuesday, April 26, U.S. Rep. Sean Patrick Maloney, who represents New York’s 18th District, was interviewed by Haldane fifth-graders for their documentary project on the U.N.’s Universal Declaration of Human Rights. The students covered topics such as the Syrian refugee crisis and women’s rights. 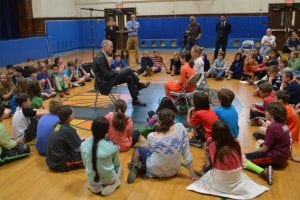 Maloney said he was impressed with the students’ interviewing skills and challenging questions. The interview was arranged by a Haldane parent, filmmaker Ivy Meeropol, working with fifth-grade teachers Kathy Battersby and Simon Dudar. Meeropol’s colleague Rob Featherstone volunteered his time to film.