Kane still in charge for now

Change may be in the air at the Cold Spring Police Department, though perhaps not as much as Mayor Dave Merandy had anticipated. At the May 3 meeting of the village board, Merandy said that he had hoped to make a change in CSPD but that a candidate in line to replace Officer-in-Charge George Kane is no longer available.

There has been no public discussion about replacing Kane, although at Tuesday’s meeting Merandy said he had discussed issues related to the CSPD with village attorney John Furst.

While there will be no immediate change in the officer-in-charge, the mayor said Kane will be required to write a detailed job description for the position. He also underscored that a lack of enforcement by CSPD has been a common complaint and that Kane will be asked to “step up” those efforts.

Lax enforcement has been brought up numerous times in recent years, especially with regard to parking violations. CSPD’s reports indicate that during the past two years officers have issued an average of fewer than two parking tickets per day. Merchants have voiced particular concern over the lack of enforcement when commuters park on Main Street for an entire day, something they say occurs on a regular basis.

“We understand the importance of the police department … and the pressure to find cost savings,” Merandy said. The village spends about $400,000 annually to operate the police force, which provides round-the-clock coverage. “We understand that’s a huge chunk of the budget,” he said. The department accounts for about 20 percent of village spending.

Merandy said that some of the issues involved in assessing CSPD could not be discussed in public, adding that the village contract with the police department is up for renewal this year.

The New York State Department of Environmental Conservation (DEC) has told village officials that the remediation of toxic coal tar at the Cold Spring Boat Club, including removal of the large tent on the site, will not be “substantially complete” until July 1. When the project got underway last fall, the plans called for work to be complete in time for the boating season. However, there were delays, most notably when substantially more rock than expected was encountered during excavation. 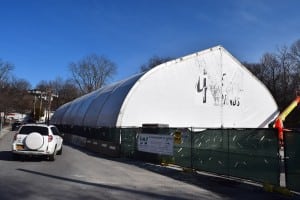 The portion of the Cold Spring Boat Club site from which toxic coal tar will be removed now lies beneath a huge tent.  (File photo by M. Turton)

Merandy said that the DEC and contractor have agreed to give boat club members access to the site on the weekends of May 14 and 21 to install docks and get their vessels in the water. “They’re trying to be accommodating,” he said, adding that a truck and steel piles will be removed from the site to help facilitate access.

Deputy Mayor Marie Early reported that the Main Street Project is progressing quickly. She said that if all goes well, new concrete would be poured and walkable from the pedestrian tunnel to Kemble Avenue by next week. “Even with the bad weather we’re on schedule,” she said. It was thought that due to rain the first concrete would not be poured until May 9. However, because the weather improved late in the week the contractor was able to begin the first pour on May 5. 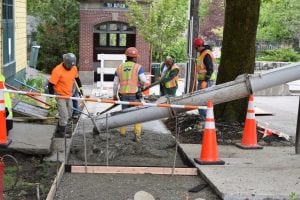 Trustee Lynn Miller commented that some of the temporary ramps being put in place along Main Street seem inadequate, pointing specifically to the makeshift wooden walkway at the Foundry Cafe. “Businesses really need to look accessible” during construction, she said.

The owner of the building at 113 Main Street addressed the board to ask that the ramp in front of his building remain in place. The consultant for the Main Street Project consultant had recommended that it be replaced with a curb for safety reasons. Merandy said there would be enough time to consider the request prior to the board’s next meeting.

10 thoughts on “Village Police Told to Do More”