Beacon High freshman focuses on those who help

Noah Cory doesn’t remember any of it. He spent more than three years battling a stage 4 neuroblastoma tumor, but all he can recall is the remission party. He doesn’t remember the chemotherapy and radiation treatments because the battle began when he was 18 months old.

Cory, now 15, may not be able to summon up the experience, but its influence over his life — first and foremost, the fact that he has life — guided the making of his first film, a 30-minute documentary called Ordinary People with an Extraordinary Life. It will premiere at 7 p.m. on Friday, May 13, at the Seeger Auditorium at Beacon High School. Tickets will be $5 at the door, with all proceeds donated to the Ryan McElroy Children’s Cancer Foundation (ryansfoundation.org), a Pawling-based charity devoted to helping children in the mid-Hudson Valley with life-threatening illnesses, and the Ronald McDonald Houses of Westchester and Albany. 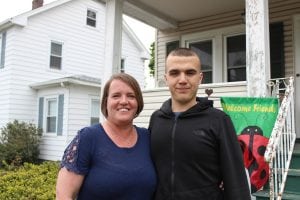 Theresa Cory and her son Noah at their Beacon home. (Photo by A. Rooney)

Cory, who is a freshman, took a filmmaking class at school in the fall that got him hooked. He had been assigned to find a small project but “as I got going it became an actual film.” He had wanted to make a film about childhood cancer but changed course after he learned more about the Ryan McElroy Foundation.

“I decided that instead it would be about people who help kids who are going through cancer,” he says. “My teacher taught me the basics, including proper alignments, and as I went along, I got better — in fact when I watch the film now I can tell which interviews were the earlier ones. Now I have a better editing program and just more experience.”

When considering the topic, Cory had to decide if it would be his own story or about other kids. After conducting the first interviews, he instead decided to focus on those who form the support system behind a child going through treatment. This includes not only parents and siblings but the doctors and nurses. The film shows the human side of these medical personnel as Cory asks why they do it, how they do it and how it affects them. 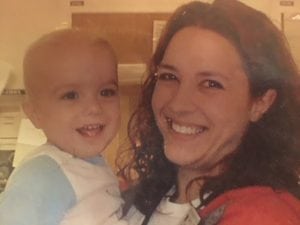 Noah Cory and his nurse, Melonie Rooker-Forget,  at the time he was undergoing treatment.  (Photo provided)

“People know it’s hard for the child, but they don’t know how they are helped, they don’t know what the doctors go through,” Cory says. “My oncologist is up late nights, crying.”

Theresa Cory, Noah’s mother, says of that doctor, Dr. Mandy Mack, “She absolutely saved Noah’s life.” The diagnosis of stage 4 cancer meant there were not great odds. “In the beginning you think your child won’t be here for that long,” Theresa Cory recalls. “He went through chemo, radiation, bone marrow treatment and many surgeries, and she’s the reason he got through this. Now he goes through a check-up every six months with a doctor who specializes in long-term effects in teenagers.  Noah has a twin brother and an older sibling who does remember it all. All three have handled it well, done amazing things and moved on from it … Noah has taken a difficult experience and turned it into a positive.”

Before the screening, a representative from the Ryan McElroy Foundation will share remarks, letting people know where the money is going. Cory will speak as well, most likely after the screening. The parents who are interviewed in the film will also be there. In the film, one father is interviewed about his child, who died. “I wound up staying out of the room [while Cory conducted the interview] — I didn’t realize the effects it would have,” says Theresa Cory. “I’m grateful for still having my child sitting with me.” 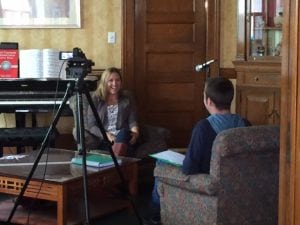 Noah Cory, filmmaker and former patient of ”Nurse Melonie,” interviews her for his film.  (Photo provided)

Cory is now planning a fictional film to be shot over the summer. He aspires to attend NYU or another university with a strong film program. For his mother, the experience has motivated her to, once again, become involved in helping. “We had a foundation after Noah was sick, but it was hard, as a single mom with a fulltime job, to maintain it,” she says. “Now I’m becoming more involved with the Ryan McElroy Foundation,” which was founded by Chip and Judy McElroy after they lost their son to cancer just before his fifth birthday.

Theresa adds: “Noah decided to use his enthusiasm for the film class to inform everyone about childhood cancer. He has gone to multiple hospitals, met with many families and spoken with child life specialists and families who are fighting this battle every day. He’s a smart, kind, athletic and very determined freshman!”