Scientists and dads unveil projects to halt spread of lyme

As spring arrives, it’s time to dust off the grill and gardening tools but also the bug spray, tweezers and magnifying glasses. From now until early July is prime tick season in the Hudson Valley, when the dreaded blacklegged ticks, capable of spreading lyme disease as well as other illnesses, emerge to feed on the blood of whatever warm-blooded creature walks nearby.

Dutchess County has one of the highest rates of lyme disease in the country. It’s so prevalent that some long-time residents joke that if you haven’t gotten it yet, it just means you haven’t lived here long enough.

Thankfully, that could soon change. This year, two projects have been unveiled by Hudson Valley residents to help with the scourge of tick-borne illnesses: A long-term project spearheaded by two experienced scientists, and a project with an immediate impact hatched by two experienced dads.

The long-term effort is The Tick Project (tickproject.org), an ambitious five-year study to determine the safest and most effective ways for neighborhoods and municipalities to kill ticks. The project is co-directed by Richard Ostfeld, a senior scientist at the Cary Institute of Ecosystem Studies in Millbrook, and Felicia Keesing, a professor of mathematics and computing at Bard College. 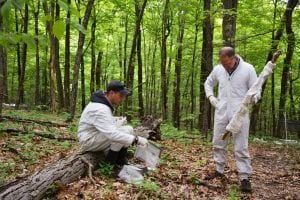 Ostfeld and Keesing have collaborated before when they co-edited a book on the ecology of infectious diseases. “This is a project that Rick and I have wanted to do for a really long time,” said Kessing. “We’ve been trying to understand the factors as to what makes certain places and times riskier for tick-borne diseases. But for years we’ve been wanting to do a project in which we took that knowledge and tried to use it to prevent cases from happening in the first place. That’s an expensive thing to do, if you’re going to do it right.”

Thanks to a $5 million grant from the Steven & Alexandra Cohen Foundation, the project is underway. (The gift accounts for more than half of the $8.8 million the Cary Institute hopes to raise.) This summer, the scientists will visit 50 neighborhoods throughout Dutchess County, including in Beacon, Fishkill and East Fishkill, that have had an unusually high number of cases of lyme disease. After conducting baseline readings to determine the average number of ticks in each neighborhood, the scientists will return in the summer of 2017 to test two methods of tick control.

Keesing said that it was important that the methods were not only commercially available but environmentally safe as well, with studies that showed  they had no negative effects on people, pets, wildlife and beneficial insects such as honeybees    and earthworms. “We chose not to spray chemicals on people’s lawns,” she said. “We’re not comfortable with that.”

The first method is a Tick Control System, which is a small baited box that attracts rodents such as mice, chipmunks, and shrews. Although blacklegged ticks are commonly referred to as “deer ticks,” rodents are responsible for infecting the ticks with the lyme bacterium. When the rodent enters the TCS, they are exposed to a low dose of fipronil, the active ingredient in many tick treatments for dogs and cats. The rodents are unharmed, but the ticks soon die. 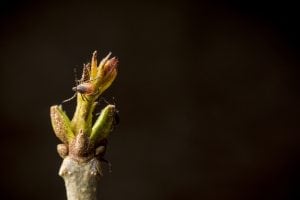 The second system is a fungal spray commercially available as Met52. It is made of a naturally occurring fungus that has been shown to kill ticks but has no adverse effects on people or wildlife.

Residents who have been invited to take part will have their yards treated with both methods, although some will unknowingly receive placebo versions of each treatment. Kessing believes residences that receive both methods will show the lowest rate of tick infections, but it’s important to test both methods separately to gauge their individual effectiveness.

Kessing hopes that when the project is completed in five years, she’ll be able to tell people what they can do to halt the spread of tick-borne illnesses. “Rick and I get asked all the time by people whose kids got lyme disease what they can do in their yards,” she said. “We’ve never had a good answer for them. So being able to say to them, ‘This is what you need to do, this is how it works, and this is how long it’s going to take,’ would be very exciting.”

All well and good for 2021. In the meantime, tick checks remain the most effective preventive measure. If you need a reminder, Bill Braine and Mikey Jackson of Cornwall have a way to remind you.

For years, any time he finds a tick on one of his two children, Braine has posted a reminder on social media for friends to do their own tick checks. His friend Jackson, co-owner of the 2 Alices Coffee Lounge in Cornwall and Newburgh, kept a sign in the bathroom reminding him to do a tick check on his son every night before he got in the bath. But as anyone who has attempted to do a thorough tick check on a squirming toddler can attest, the process is not without its perils.

“I said ‘I need something that’s going to make the tick check easier,’” said Jackson. “What if I had a magnifying glass and a flashlight and a timer all in one so I could make sure I didn’t rush through it?” 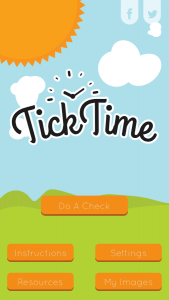 The home screen of the Tick Time app

Although neither men described themselves as the type to hardwire a contraption in their garage, they nevertheless began work on such a prototype until one night Jackson looked at his iPhone and realized it already had a timer, a flashlight and a camera with a zoom lens. He ran out the door to Braine’s house.

“We’re good friends, but it’s still unusual for him to just show up unannounced like that,” recalled Braine.  “He just looked at me and said ‘It’s an app!’ And I said ‘Oh, that makes a lot more sense. And then you could set it to remind you, and remind all your friends over Facebook and Twitter.’”

After a year of development with Danny Nanni, one of Jackson’s baristas who had just enrolled in graduate school at NYU for app development, the men in early March introduced TickTime in the iTunes app store for $1.99. TickTime not only can be set to deliver notifications at certain times to remind you to do a tick check, it assists in the process using the phone’s timer, flashlight, and camera zoom lens. It can also be set to play a song already stored on the device to make the process less threatening for youngsters. If you find a tick, it’s easy to take a picture for identification purposes, and other menus within the app detail the best methods for tick removal and other resources.

While the app has already helped hundreds of people with their own tick checks, the two men say one of its greatest benefits is that it normalizes the tick check process for kids, who often thrive on routine.

“Sometimes parents forget with doing the dishes after dinner and rushing to get the kids ready for bed, to do a tick check,” said Jackson. “Making it a routine like this helps the kids to remind the parents that it’s time for a tick check.”