A philosophical change is needed, and the time for change is now. That was the message in Beacon on Wednesday (May 11), as three of the four candidates for the city’s Board of Education answered questions in front of a sparse crowd. The election is Tuesday, May 17.

Meredith Heuer, Michael Rutkoske and Antony Tseng, all seeking their first elected office, took part in a Meet the Candidates forum held at Beacon High School and organized by the district’s parent-teacher organizations. Incumbent Tracy Antalek Everett, who is also running, did not attend because of a scheduling conflict. 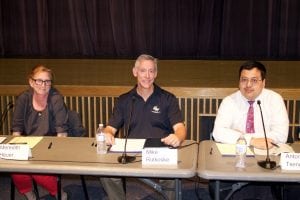 The four candidates are vying for three seats on the nine-person board. Polls will be open from 7 a.m. to 9 p.m. on Tuesday. City of Beacon residents vote at Beacon High School and Fishkill and Wappingers residents vote at Glenham Elementary School.

At the forum, the three challengers spoke at length about their dissatisfaction with the current board.

“Our district is not really in a healthy place,” said Heuer, who is a professional photographer. Referring to the district’s ongoing superintendent search, its sixth in a decade, she said, “We need to find good leadership that can guide this ship and focus on the kids.”

“The board and district were not operating properly,” said Rutkoske, who is a capital asset program manager for the Entergy Corp. “We’re wasting a lot of time, energy and money and not focusing on the kids.”

Tseng, an environmental engineer, said that as he began attending school board meetings, he realized “there were a lot more questions than answers.”

Beacon school board meetings over the last year have become highly charged affairs as community members have accused the board of unethical behavior and favoritism. In January, superintendent Barbara Walkley resigned ten days after nearly 400 community members converged upon a board meeting, demanding  change.

By contrast, only a few dozen people, including several current board members, attended Wednesday’s forum.

In addition to discussing the superintendent search, all three candidates insisted the community must be more engaged once at least two new board members are seated in July.

“It was really fascinating to see [the community’s] questions not answered” by the board, Tseng said. “There has to be an exchange, and that exchange doesn’t happen under the current structure. Engagement isn’t just a box you check off.”

There has seemed to be “an effort not to listen to the public,” Rutkoske said. “Our district has been in a crisis, and in a crisis you really have to open your ears.”

The lack of staff and administrator diversity must also be addressed, the three candidates said, saying that a “can-do” attitude must replace what they perceive as the “can’t-do” mindset of the current board.

“Our staff does not reflect our student body,” Heuer said. As the city of Beacon grows, its diversity will become “one of the greatest things about this district. Beacon is such a perfect size to become a model. I would love to foster that” within the school system, she said.

The candidates also discussed school board spending, not critically, but within the context of the state-mandated tax cap, which many believe has handicapped schools and municipalities since it was put in place four years ago. Without citing specific line items, Heuer, Rutkoske and Tseng all said they would work to cut “fat” and discretionary spending before student programming. 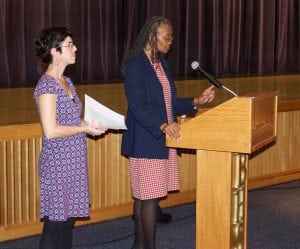 The three praised the teachers at Beacon’s six public schools as well as the dedication of its 3,400 students. “There’s still so much good,” Rutkoske said. “We need to keep that, as board members, in mind.”

Perhaps the most telling exchange on Wednesday came after intermission, when audience members asked the candidates questions directly.

With so much distaste for the perceived actions (or inactions) of the school board over the last year, current board member Georgia Patchen asked the candidates how they would be able to work with other board members if elected.

“For consensus building, I may have a position that I want,” Tseng said. Other board members may also have their own positions, but “if we can identify common ground and build upon that, we can come to a decision together.”

Said Heuer: “Learning to listen to each other and put those things aside is going to be really important. We have to look at each other again and try to make it ‘for the first time’ again.”

Rutkoske said that “if we follow the rules, the discussion will happen. We’re going to be forced to listen to each other. That’s how I see it.”