Mental Health America, a non-profit founded in 1909 that has chapters in Putnam and Dutchess counties, promotes May as Mental Health Month. The region is paying attention: In Putnam, according to a federal survey, residents reported an average of 3.1 “mentally unhealthy days,” a 40 percent increase over the average of 2.2 days reported the prior year. (The survey asks, “Thinking about your mental health, which includes stress, depression, and problems with emotions, for how many days during the past 30 days was your mental health not good?”)

That number may even be low because of the stigma attached to mental illness. “Many people do not seek help because they are afraid of being judged,” says Jane Wilson Cathcart, a clinical social worker and therapist in Cold Spring. “And usually they are their own harshest critics.” 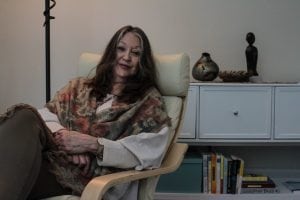 Therapist Jane Cathcart in her Cold Spring office. (Photo by A. Peltonen)

In Dutchess County, where residents reported about the same average number of mentally unhealthy days per month (3.3) as the previous year (3.2). The state average is 3.7 days.

Everyone you know smiles or laughs. But that doesn’t mean they’re content.

“Some of us smile because we’re scared that if we don’t, someone will ask us what’s wrong,” explained a member of a Beacon recovery group who asked not to be identified for privacy reasons. “Then we might have to tell them: Everything is wrong.”

What should friends and family watch for?

Self-imposed isolation can be a key indicator of depression, says clinical psychologist Michael McKee, who is based in Garrison at 35 Garrison Landing. When it’s severe, “connecting with people feels painful,” he says. Depression is a disorder of slowing. There is loss of appetite, and activity.” 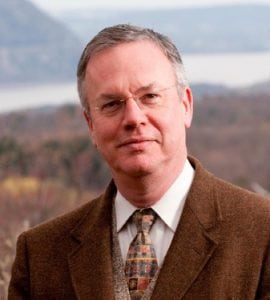 A lesser-known sign of depression is irritability. “It may reflect dissatisfaction with life and relationships that is coming out of a depressive process.” According to the National Institute of Mental Health, about 7 percent of U.S. adults had at least one major depressive episode in the past year. The percentages are higher among young adults (18 to 25 years) and lower among those over age 50. Major depression also effects a higher percentage of women than men.

A primary-care physician is often the first point of contact for adults suffering from a mental illness. He or she “is supposed to address the issue, ask certain questions pointed at mental health,” says McKee. “Most antidepressants are prescribed by primary doctors, not psychiatrists.” However, if a specialist does not get involved, a follow-up to correct dosage may be overlooked.

Children as well as adults can suffer anxiety and depression. In those cases, the first responders are often teachers, says Cathcart. Local agencies have been increasing focus on children’s mental health and have received praise from the state for their programs. Mental Health America of Dutchess offers many of its programs, including support groups and classes for children, their siblings and parents, at the Beacon Wellness PROS Center at 249 Main St.

Mia Bakan Clarke, a psychologist and art therapist who practiced privately in Beacon for five years, has found art therapy works well with children. “A lot of kids don’t want to talk,” she says. “Art comes from the same place as dreams, the unconscious …. If a certified therapist asks the right questions about what is going on in the art, and thus their psyches, a kid can break through faster than in talk therapy.” Clarke reminds parents that if their gut tells them their child needs help, this is a decision they can’t leave to the child: the parent must act on his or her behalf.

Friends and family are often first responders but might stumble on the approach, Cathcart says. “Kindness goes a long way, as does listening,” she says. “What’s not helpful? Telling people to ‘Snap out of it.’”

For assistance, Putnam County maintains an anonymous helpline at 845-222-1222, says Megan Castellano, director of the Mental Health Association in Putnam. The Dutchess hotline is 845-473-2500. Depending on what symptoms you report, they will refer you to mental-health professionals, non-profit agencies or support groups. A doctor or psychiatric nurse can help you vet a clinic, hospital or other facility. A friend can drive you. Call 911 if there’s major distress.

The more “psychoeduction” the community receives, the more likely people will come to realize mental illness is not a character flaw. Mental illnesses are as physiologically real as a heart murmur or failing kidney. It’s biology and/or genetics and/or environment. Brain chemicals may malfunction due to inherited patterns, physical pain or illness. A death can create complicated (seemingly unrecoverable) grief. Everything from a divorce to a battlefield experience can cause lasting traumatic stress.

Many patients who have major depression — the enduring, tunnel-vision kind that can lead to suicidal thoughts — ultimately find relief, according to studies, whether from medication, talk and behavioral therapy or alternative therapies. Depression, anxiety and bipolar disorder usually call for adjusting, through medication, the cycles of brain chemical serotonin. Like an engine stripped of oil, without the right amount of serotonin, your brain can’t run. A disrupted dopamine system is connected to psychosis and schizophrenia.

The teen years are prime time for experimental behavior with drinking, drugs and acting out, and teens are good at avoiding scrutiny. Nonetheless, there are strong signs that may indicate mental health problems, such as loss of joy in favorite activities, friends or deteriorating appetite or hygiene. In this case, says Clarke, you should ask teenagers if they are in any kind of pain; if they’re sleeping okay; if anything is stressing them out.

Eating disorders such as bulimia are tough disorders to detect. Usually, those who suffer from the illness “are pretty intelligent and can manipulate reality,” she says. Food-hoarding, overeating and throwing up may be hidden, but you should be ready for the nitty gritty, too: “Swollen cheeks and a glandular-looking face” could indicate copious vomiting, and cuts on the fingers and knuckles may be the result of biting down when forcing vomit.

Most mental-health services in Putnam County are concentrated in its eastern towns, notes Castellano of the Mental Health Association. The west side, namely Philipstown, is underserved, and Castellano says she would “like to know specifics” about the needs here, so it can be a catalyst. One new resource she is happy to see here is crisis-diversion center Putnam Rose House in Garrison, a “peer-operated” facility designed to prevent “psychiatric distress which may lead to hospitalization.” People may stay for up to five days. For information, call 845-452-2728, ext. 401.