Reports in Beacon and Philipstown raise no concerns

On May 2, the city manager in Newburgh declared a state of emergency due to the presence of high levels in the municipal water supply of perfluorooctane sulfonate (PFOS), a man-made pollutant that was a key ingredient of the fabric protector Scotchgard and is still used in pesticides, cleaning products, and hydraulic fluids for aircraft. We asked our reporters to learn more about the water supplies in Cold Spring and Beacon.

The Village of Cold Spring regularly tests its water for 18 contaminants from coliform bacteria and fecal coliform and E. coli to inorganic contaminants and nitrates. Its most recent Drinking Water Quality Report, prepared with data collected during 2014, found all contaminant levels within the range required by New York state.

Lead, which has been in the news because of the situation in Flint, Michigan, tested in Cold Spring at 1 part per billion. The highest level of lead allowable in drinking water is 15 parts per billion. (Several samples of Flint’s water exceeded 100 ppb, and one sample collected after 45 seconds of flushing still topped 1,000 ppb. Lead typically gets into drinking water from corroding pipes.)

The Haldane Central School District recently completed its own analysis of its water quality. In an email to The Current, Director of Facilities Michael Twardy said that an independent lab was used to test for levels of lead and copper. “The amount [of both lead and copper] was so negligible that the lab stated they were not able to find any,” he wrote. 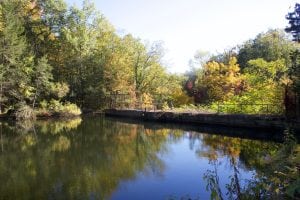 Part of the reservoir at the Cold Spring water system plant on Fishkill Road. (Photo by Kevin E. Foley)

Cold Spring’s water quality report for 2015 comes out at the end of May. Superintendent of Water and Sewer Greg Phillips told The Current the report will again show no cases where contaminants exceeded acceptable levels. Monitoring is carried out monthly to annually depending on the contaminant, he said, with most analyses conducted in independent labs approved by the federal Environmental Protection Agency (EPA). The village does its own testing for chlorine and turbidity levels.

The biggest challenge in managing the village water system, Phillips said, is the age and condition of the infrastructure.  “Fortunately, the issues we deal with such as seasonal discoloration are about aesthetics rather than health,” he said.

Cold Spring’s and Nelsonville’s drinking water comes from two reservoirs on Lake Surprise Road about three miles above the villages. They are filled by rain and snow melt. Water flows from the reservoirs down Foundry Brook to a third reservoir and the treatment plant on Fishkill Road, where it undergoes coagulation, filtration, pH adjustment and disinfection as well as corrosion control, which protects against lead contamination. From Fishkill Road the water is piped into the villages.

A copy of the 2015 water quality report will be available at the village office and on the village website by June 1. Previous reports can be downloaded at coldspringny.gov.

Go ahead and wash your car, Beacon. The drought is over.

Thanks to two weeks of heavy rains, Beacon’s reservoirs are back up to 96 percent capacity, ending the severe drought that gripped the city during a hot and dry autumn.

Don’t go too crazy with the hose, though.

“It’s hard to know, at the time, what the anomaly is,” explained Ed Balicki, the city’s water and wastewater superintendent. “Was it the dry autumn, the winter without any snow or the two weeks of constant rain we just had? So you have to be careful.”

While Balicki said water conservation is prudent no matter what the level of the reservoirs, Beaconites can at least be certain that the water coming out of their taps is clean. The city just issued its annual water quality report and, as expected, its water does not exceed any maximum contaminant levels or violate any other quality standard.

That includes tests for PFOS, the pollutant detected at high levels in Newburgh. The levels of PFOS in Beacon’s water, as well as all other synthetic organic chemicals, are well below the maximum allowed, said Matthew Fezza, the chief operator at Beacon’s  Water Treatment Plant. 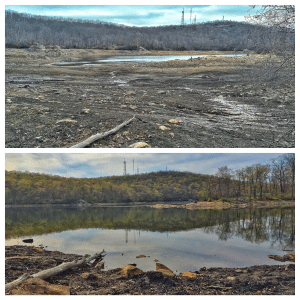 At top, the Beacon Reservoir during the November drought. Bottom: The same spot on Wednesday, with the reservoir at 96 percent capacity. (Photos by B. Cronin)

One of the many substances that the city tests for is fluoride. Unlike many municipalities, Beacon does not fluoridate its drinking water. “We believe fluoridation does more harm than good,” said Fezza. “It’s a known carcinogen. There’s also a lot of cost involved, so we shy away from that.” (A review by the National Academies of Sciences, Engineering and Medicine found that “the evidence on the potential of fluoride to initiate or promote cancers, particularly of the bone, is tentative and mixed.”)

The city’s water comes from three reservoirs (the Beacon and Melzingah reservoirs in the Highlands and the Cargill reservoir off Route 9 in Cold Spring), two wells in Beacon and a well in Fishkill. Each source is tested annually. The water is processed at a water filtration facility on Liberty Street, where it is tested every Tuesday. The plant has the capacity to handle 4 million gallons of water a day, although the average last year was around 2.5 million gallons.

Balicki said that the biggest challenge his department faces is one that many other municipalities are dealing with: aging infrastructure. “The country went through  a massive expansion after World War II,” he said. “So a lot of infrastructure was built during that boom time, and a lot of that still exists. And it’s costly to replace, renew, upsize or upgrade that.”

This includes many old household plumbing systems that can introduce lead into drinking water. Although the city’s tests for lead came out at 5 parts per billion, safely below the 15 parts per billion allowed by the federal government, the city still recommends flushing the tap for 30 seconds to two minutes if your water has been sitting for several hours before using it for cooking or drinking.

The city’s water quality reports, including the most recent, can be downloaded at cityofbeacon.org.