Peter Bynum’s work on glass on exhibit at Manitoga

Most visitors to Manitoga encounter the home of Russel Wright as he wished them to, spying it atop the rocks as they walk the perimeter of the pond. Now there will be even more to draw the gaze, as a site-specific installation of illuminated paintings by Garrison’s Peter Bynum take up residence in both Wright’s home and studio, marking the first time that non-Wright work has been exhibited inside the buildings. They’re initially seen from afar, across the quarry pond, held in the light in the floor to ceiling windows. There’s even an “immersion room” space created for several.

Bynum, whose studio is located in a capacious former umbrella factory in Peekskill, has contributed 12 works collectively titled Ecstatic Light in reference to the nature of the work, in which paint is pressed between multiple layers of glass. The result presents what Bynum calls “the secret life of paint.” His paintings evoke the human nervous system, with thousands of arteries, capillaries and veins a conduit to life, while also appearing as coral, tree branches and aspects of other natural world realms. 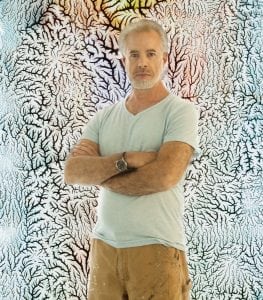 The process begins with the artist placing a sheet of tempered glass on a surface, then laying paint onto the glass and moving the paint around using hands and arms to smear it. Another sheet of glass is carefully placed on top, at which point Bynum and his studio assistants “pressure” the paint, working with hands and knees, digging, walking over it. The top sheet is slowly lifted up, with Bynum controlling the speed of the separation.

“Finally, we grab ends, flip it over, move it quickly to the vent, where it dries in a day,” he explains. “The pressure releases paint’s primal energy, allowing it to have a life of its own. I have a good deal of input, but also no control. I can control color, and by adjusting the viscosity of the paint I can control how fine or large the boundary is,    but that’s all — the nature of paint is to act like nature.”

Bynum discovered the technique during a turning point in his own personal and artistic life. Coming to New York City to attend film school at New York University, he partook of the East Village art scene in the 1980s, living a block away from CBGBs at a time when the punk scene, manifested through music and art in particular, was at its height.

By the mid-1990s, “through life’s twists and turns, I had two young children and was working as a multi-media artist,” he recalls. After moving to the Hudson Valley in 1996, he narrowly missed possibly becoming a casualty on 9/11 (he had a 9 a.m. appointment in one of the towers) and, deeply affected, began to feel that painting was the “only thing that worked to express the range of feelings I had.” 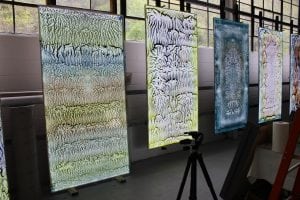 Peter Bynum’s illuminated paintings, suspended in his Peekskill studio. (Photo by A. Rooney)

Experimentation led him to the discovery that transformed his work. “One day I held a glass painting up to the light and saw that when the light suffused the paint it illuminated something hidden,” he says. Working with an optical scientist, he began with the question “Can we use LEDs to create a lighting panel that will be as thin as possible?”

He adds: “I felt when I discovered this that the very paint-replicated ecosystems found throughout nature … this is a design that nature has evolved over a half billion years. Humanity is just a narrow slice of life upon the planet. So, I wanted to pursue that and illuminate it. No one has allowed paint to express its own intelligence.” Bynum appreciates that this process “dissolves the artistic ego by making the paint the prime agent.”

Bynum says that, as an idea, painting on glass tends to raise an inherent bias in the “crafty” vein, despite seeing that “glass makes sense for painting, as it breaks away from the tradition of light hitting painting on an opaque surface. Light has always been depicted in painting, but never used as an element in the painting itself.  By having life behind the paint you double the amount of light available to the painting.  So light almost lets you see inside the paint — it illuminates.” 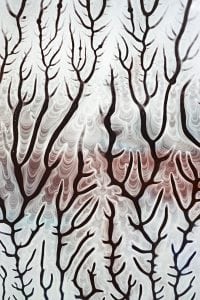 Bynum feels that Manitoga, which he sees as Russel Wright’s expression of a Garden of Eden, is a perfect environment for his work. “Russel Wright wanted people to experience a deep intimacy with nature, and part of the goal of this work is to do just that,” he says.

Ecstatic Light will be on view through Nov. 14 and can be seen during public tours given at 11 a.m. and 1:30 p.m. Friday through Monday (admission is $20 and reservations required). An opening reception for museum members will be held on Saturday, May 21, from 5 to 7 p.m. Artist-led and sunset tours are also planned; visit visitmanitoga.org for dates.  Manitoga is located at 584 Route 9D; call 845-424-3812.