After making a decision that changed the course of his working life, Alejandro Lopez can now — having just passed the union entrance exam — officially call himself a professional scenic artist. Philipstown’s Depot Theatre is reaping the benefit of his skills for the Linda Speziale-directed production of Gilbert and Sullivan’s H.M.S Pinafore, which begins a three-weekend run on Friday, May 20.

In returning to this field after decades in the equally specialized field of fine art handling (packing, unpacking, installing and uninstalling for museums), Lopez is revisiting his Cuban youth. Lopez, who lives in Beacon, was born in Havana and studied fine art at the Escuela de Arte de San Alejandro. His early work was devoted to his own visual art and to scenic design and painting for Cuban theater companies. He left his homeland for Venezuela for economic reasons (because he could not afford paint, he relied on powder mixed with glue), working in Caracas as a freelance set painter. 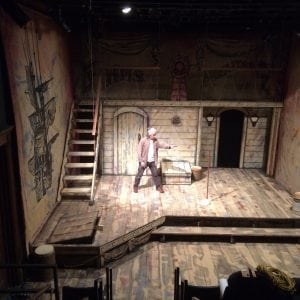 After being invited to present two of his performance pieces at Rice University in Houston, he settled in Miami, where he shifted into the art handling work. In 2000, Lopez moved to New York City, eventually working his way into the registrar’s office at the Metropolitan Museum of Art, which he describes as “a funnel through which all incoming and outgoing artwork has to come through.” He handled everything from medieval manuscripts to impressionist paintings.

Four years ago Lopez and his family moved to Beacon. “My wife had gotten to the ‘I want a yard’ stage,” he says. “We loved the fact that Beacon has an art museum” in Dia:Beacon. A year ago, Lopez decided to make a change and return to the theater. He spent three weeks taking an intensive course at Cobalt Scenic Studios in White Lake.

It was an injury sustained while painting in his basement which led him to the Depot. The theater’s artistic director, Nancy Swann, received a call from her daughter, Casey Swann, who is a chiropractor, who said she had a patient who was interested in pursuing his lifelong dream of becoming a scenic artist. He just needed a theater.

“She sent me a copy of his portfolio that included shots of scenic painting from his early days in Cuba,” Swann says. “I sent it to board member Chris Nowak, who is a production designer in the film business. Chris knew right away this person had talent so we set up a meeting.

“That is when Alejandro walked into our lives. It was obvious from his body of work, he was a gifted artist and his art pieces displayed talent for design. We asked Alejandro if he would be interested trying his hand in designing our next main stage production, and to our delight, he said yes.” 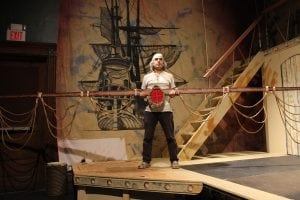 H.M.S. Pinafore’s scenic designer, Alejandro Lopez, holding a yet-to-be hung portion of his work, on stage at the Depot Theatre.  (Photo by A. Rooney)

Lopez says that first meeting “was all about the space. In scenic design there are two big aspects: the mechanical — the function and dynamic of the space — and the aesthetic, which is integrated into the mechanical. This particular set, as it has turned out, is not in any way what I had first envisioned, but you are working against time and certain other limitations. Nancy and I went over the numbers [measurements] so many times, together and apart, and then we built it.”

In preparation for Pinafore, Gilbert and Sullivan’s fourth collaboration, written in 1878 and set aboard a ship in the Victorian-era Royal Navy, Lopez researched the history of the play, the lingo and England in the late 19th century. To paint the drops, Lopez sketched, then painted them in black on a “marred” surface. He has only an 8” x 12” surface in his basement studio in which he can apply paint, so it is painstakingly done, one section at a time.

“When you put it up, it seems like nothing, but there is a lot behind it,” he says. “I love to transform the space, make it look deeper.”

Lopez calls his work nothing without lighting design, praising designer Donald Kimmel. “You can fill the stage with lots of objects but without proper lighting, it won’t look good,” he says. “Donald has done an amazing job setting up the scenery and he’s been very supportive; Nancy has too. They’re open to ideas and to the improvement of ideas. For instance we’ve used the metal pipes of the lighting grid for ships’ rigging. You want to see how the mechanics of the scenery integrate with the show.

“It’s a process, learning the dynamics of doing a production with people who volunteer their time. There has to be a shrinking of ideas. I had a lot of them! I was envisioning dioramas outside the open windows of the alcove, but had to minimize that. In terms of a visual breakthrough, I’m not breaking my own sound barrier but hopefully it functions, looks good and is theatrically just right: the scenery, the drops and the magic of the black box and the light.”

Swann guesses there’ll be a next time. “It has been a fun collaboration working with this talented and kind artist,” she says. “His design and scenic painting has transformed our little black box theater into the deck of the H.M.S. Pinafore and makes one feel part of this comic opera from the moment you walk in the door.” 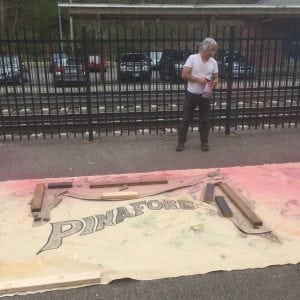 H.M.S. Pinafore’s scenic designer, Alejandro Lopez, at work on one of the painted drops he created for the show.  (Photo by Amy Dul)

Soon after completing the Pinafore work, Lopez was bound for Cuba, a trip he has, unlike other emigrants, made regularly since departing.  “It’s my mother’s 80th birthday, and we have all eight siblings together for the first time in 20 years,” he says. Of his homeland, he says, “Cuba needs a slow transition into a more self-defining society; they’ve been too controlled. Cuba can teach a lot of lessons to those in other countries, for instance relations between blacks and whites have never been an issue there. But then again, in Cuba it’s hard to define your future.”

Lopez’s designs can be appreciated by many upon the opening of HMS Pinafore, which runs Fridays, Saturdays and Sundays through June 3. The musical “is full of mirth and silliness and, yes, some absurdities,” says Swann. “The adults in the audience might find some resonating lampooning about the rise of an unqualified official through the ranks of government who ends up as the head of the Royal Navy. Sound familiar? It’s a comical upending of class distinctions and social norms.”

Tickets and showtimes are available at philipstowndepottheatre.org.