Margaret Fuller pushed for equality in the 1840s

Margaret Fuller might have covered this story herself, had she been reporting news locally in the fall of 1844. A pioneering women’s rights activist, noted Transcendentalist and sometimes journalist, Fuller lived in Beacon for seven weeks that year, completing what some consider America’s first feminist work, Woman in the Nineteenth Century, which would inspire the 1848 Women’s Rights Convention in Seneca Falls.

On Saturday, May 21, the city of Beacon will honor Fuller with the placement of an historic marker commemorating her stay at the Van Vliet boarding house, located in what was then called Fishkill Landing. The marker will be a component of the Women’s Rights and Suffrage History Trail, an effort by the New York State Office of Parks, Recreation and Historic Preservation to document the role women played in the building of the state, through education, politics and the arts. 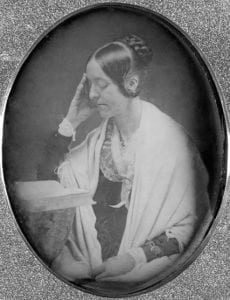 A daguerrotype of Margaret Fuller taken in 1846

The 11 a.m. dedication, coordinated by the city, the Beacon Historical Society and Dutchess County Tourism, will be held at the Beacon Visitor’s Center/Polhill Park at the intersection of Route 9D and Main Street. Michael Barnett, a scholar of Fuller’s work who wrote the grant application that funded the marker, will speak about her legacy, and a Fuller poem set to music by Beacon’s Debra Kaye will be sung by Kelly Ellenwood of BeaconArts. (A display on Fuller created by the Beacon Historical Society is also on exhibit at the Howland Public Library through May.)

Ellenwood was inspired to commission the song after learning that Fuller played piano and sang and was a great admirer of music, especially the works of Beethoven. “She personally knew George Sand and Frederic Chopin, and wrote many essays and poems about music and its importance in our lives,” Ellenwood says. “It occurred to me that a song set to Fuller’s text would be absolutely appropriate for the occasion.”

Ellenwood contacted violinist/violist Kathleen Bosman and Kaye, who agreed to the assignment; she chose “Freedom and Truth.” BeaconArts assisted in raising funds for the commission.

Margaret Fuller documented her time in Beacon in letters. She wrote to her brother on November 23, 1844: “I have finished at leisure the pamphlet, and written one or two trifles, also studied much in the evenings. All the fine weather I have passed in the mountain passes, along the mountain brooks or the river.”

Much of Fuller’s work was dedicated to social activism and reform, particularly women’s rights and poverty. According to Susan B. Anthony, Fuller “possessed more influence on the thought of American women than any woman previous to her time.”

Fuller was born in 1810 in Cambridgeport, Mass. Unusually for the period, her father, a lawyer, later a Congressman, schooled her thoroughly and rigorously in the classics, though a change of fortune upon his death turned her from student to teacher. All through this time she was also schooled socially, with an eye toward increasing her “marriage-ability.”

The first four bars of Debra Kaye’s song, with text from ”Freedom and Truth” by Margaret Fuller. (Image provided).

In her early 20s, she began writing criticism, with one of her earliest pieces published by the Boston Daily Advertiser. Soon other articles under her byline, generally falling under the category of criticism, began appearing in a variety of publications. She used some of her earnings from translating assignments (she spoke several languages) and teaching young women — among her classes was one on a historical exploration of female culture — to send her three brothers to Harvard. Later, she was the first woman allowed to conduct research there.

Nearing 30, she began to hold “conversations” at a woman-owned Boston bookstore for female intellectuals and activists. These discussion groups, which continued for about five years, are now regarded as one of the launching pads of organized American feminism, as their content evolved toward the discussion of gender roles, suffrage, women’s rights and abolition.

After hearing Ralph Waldo Emerson deliver an address at Harvard, Fuller visited him at his home in Concord, her intellectual cachet affirmed through her leading of the “conversations.” This entrée into the meetings of the Transcendental Club marked the first time women were allowed to be members of a major male intellectual society. Respected for her intellect and her exposure to a wide range of ideas and topics, she became a favorite of Emerson, Henry David Thoreau and others in the Concord/Boston nexus. She also spent time at nearby Brook Farm, the Transcendentalist utopian community.

From 1840 to 1842, she served with Emerson as editor of The Dial, a literary and philosophical journal for which she wrote articles and reviews on art and literature. In 1843, The Dial published her essay, The Great Lawsuit: Man versus Men, Woman versus Women, in which she called for women’s equality and asked why the egalitarian ideals of the American Revolution did not apply to women, African-Americans and Native Americans. It was this work she expanded into Woman in the Nineteenth Century. Widely discussed around the world, it encouraged women to take up the cause.

In 1844, at publisher Horace Greeley’s invitation, Fuller moved to New York and joined the New-York Tribune. Soon after, she traveled overseas as the first female foreign correspondent for a major American publication. She settled in Rome, where she lent support to intellectuals and agitators who desired a liberal government.

On a trip home in 1850, the passenger boat ran aground off Fire Island in a storm and Fuller, her Italian husband and their infant son were swept overboard and perished. Thoreau came to New York to search the shore, but her body was never found.