“Correspondence” rarely produces headlines at local government meetings but it did at the May 16 session of the Nelsonville Village Board. A letter to Mayor Tom Corless from village residents Sterling DeWeese and Mary Clancy-Pace raised allegations that verbal threats and acts of intimidation may have been directed at trustee Danielle Pack-McCarthy by fellow trustee Thomas Robertson. “There is no place for this sort of behavior in our village,” the letter stated.  “In spite of witnessing Mr. Robertson’s abusive behavior toward Mrs. McCarthy you have not only condoned it but rewarded it by naming him deputy mayor …”

Pack-McCarthy and Robertson opposed each other in the March 2015 village election, which ended in a tie. Pack-McCarthy then defeated Robertson in a runoff election. In March of this year, Robertson won a seat on the board running unopposed. Corless then appointed Robertson to replace Pack-McCarthy as liaison to the Town of Philipstown and also named him deputy mayor. 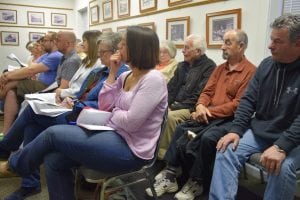 A much larger than usual audience attended the Nelsonville meeting. (Photo by M. Turton)

On April 26, Pack-McCarthy emailed village residents, outlining concerns about her relationship with Robertson and Corless. She stated that she and Robertson were respectful during last year’s election campaign but that she has faced intense criticism from him ever since and that she has experienced “a lack of support” from the mayor.

“Mr. Robertson has conducted himself in a disrespectful and harassing manner,” she wrote.  “On one occasion, (he) waited for the PCNR to turn its cameras off at the end of a (village) meeting. He got up from his seat and aggressively approached me. Getting in my face he angrily pointed his finger at me and shouted, ‘You better watch your mouth.’ He continued this, following me as I walked home, (saying) ‘You better watch what you say. This is only the beginning.’”

Pack-McCarthy said she was disturbed by Corless’s response to the incident. “I asked (him) to address this. He refused. Mr. Robertson’s harassing behavior during Village Board meetings continued … I asked the Mayor to establish some order by standing up to Mr. Robertson’s intimidation tactics, but again he refused.” 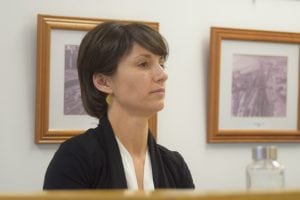 Instead, she said the mayor did the opposite, appointing Robertson as deputy mayor at his first board meeting and also stripping her of her role as liaison to Philipstown, again appointing Robertson. “This is after I have been working with the town for the past year on solidifying our building codes to make our village safer and protect it from liability issues.”

In the email, Pack-McCarthy asked residents to attend Monday’s meeting, a factor that no doubt contributed to the room being filled to capacity.

“I want to make it clear that I am not going to accept being treated with a lack of respect for doing the work that I was elected to do,” Pack-McCarthy said as part of an opening statement at Monday’s  meeting.

“We (the village board) are going to disagree … and that is OK. In fact, it’s more than OK. When handled with respect, it’s a healthy, productive way to run a government.”

“I’d rather not but I will. I think our trustees have a … dispute going and it’s not part of the Village of Nelsonville and there’s no reason for it to be under this roof,” he said. The mayor acknowledged that he had read Pack-McCarthy’s email and the response from village residents.  “I think for the most part we’re talking about something that happened almost a year ago … this is history as far as I’m concerned. I think we all need to have thicker skin.  People (may) ask us questions we don’t like.  It is what it is. That’s why we’re here. Sometimes it’s not that comfortable. It’s part of the game.” The mayor did not address any of the specific issues raised by Pack-McCarthy, including her assertion that he has not supported her. 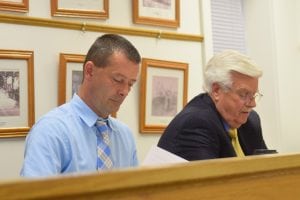 Robertson had little to say as well, stating only that Pack-McCarthy’s comments were “totally untrue.” He commented that residents can view village board meetings online.

Village resident Mary Rice addressed the board.  “I’d just like to ask that you follow diplomacy and respect for reach other and have an open dialogue,” she said. “We need to be aware of how we are approaching each other …. I don’t think this was just an issue one year ago; I’ve been to meetings. It’s about how we speak to each other — just be open and respectful.“

Prior to the regular meeting, a public hearing was held to consider the draft of an update to Chapter 77 of the Nelsonville Code. Nelsonville last revised the chapter in 1985. New York state updated its version of the Uniform Fire Prevention and Building Code law in 2007.  Nelsonville reviewed its code at that time but did not adopt an update. Village building inspector George Duncan said at the hearing that he follows 2007 state law and that the draft being considered will bring Nelsonville’s code into compliance with it.

While a few comments were received during hearing regarding the code, the most significant discussion centered on a possible merger of building departments in Nelsonville, Cold Spring and the Town of Philipstown. Philipstown Supervisor Richard Shea, in attendance along with trustee Nancy Montgomery, said the merger would provide building department service to residents of all three municipalities on a full-time basis. Cold Spring and Nelsonville currently offer building department services on a part time basis. “The idea is to save money and give better service,” Shea said.  Trustee Pack-McCarthy had been working with Philipstown trustee John Van Tassel on details of the possible merger for the past year and Shea asked if that work would continue.

Corless said that Shea’s inquiry was “completely off topic” for the public hearing and added that Nelsonville has had very limited discussion regarding consolidation. “I don’t think we’ve actually hit that point — about what we’re going to do about building departments or (local) courts.  It’s been drummed up for 10 years probably, back and forth with the municipalities,” he said, adding that such details as cost and implement have not been looked at.

Robertson commented that Nelsonville “has only two entities left” — the court and the building department. “If we lose that we have no identity,” he said, adding that the building department is not expensive and that he saw no need to have the village office open more than two or three days a week. “People in this village are very fiercely independent,” he said. “I would like to see us remain independent.”

Shea responded that the intent is to keep Nelsonville’s costs at the same level while offering full-time service. “With all due respect we were going down that road. Danielle (Pack-McCarthy) was working on it, we had … multiple meetings … and there was a feeling that we were progressing.” Montgomery said that there was no intent to diminish Nelsonville’s identity but that the village would be in a better position to receive state funding if services were consolidated.

Shea said he’d like to know if meetings will continue and whether or not Nelsonville has a real interest in pursuing consolidation. “It’s going to be real work and it’s going to be an investment of capital,” he said.

“I don’t see any reason not to continue to look at anything,” Corless responded, but added that the issue would not be dealt with that night.

The draft code update will be posted on the village website. Corless said comments can be submitted until June 13. The public hearing continues at 7 p.m., June 30.