The Hudson River Pool at Beacon — a Pete Seeger inspiration gearing up to celebrate its 10th year of operations — will open as scheduled at Pete and Toshi Seeger Riverfront Park this summer, but plans for an expanded pool for both kids and adults are on hold.

River Pool management, a volunteer board of eight, had been in discussions with the Poughkeepsie-based Scenic Hudson land trust about opening a larger pool at Scenic Hudson’s 15-acre Long Dock Park in Beacon, just downriver from Riverfront Park. After several years of discussion, however, Scenic Hudson has declined the River Pool’s request to use its site, so the search continues.

“We’ve always wanted to have a larger pool,” said River Pool board President Michael Gersh. “Pete’s vision was to have these pools all over the place — and they would be big enough for adults and children.”

The current pool, which opened in August 2007 and is available to the public for free, is about 17 feet across and 24 to 30 inches deep. The pool is actually a circular flow-through fiberglass structure with a netted floor that doesn’t touch the bottom of the river. A larger pool would need to be in water at least six feet deep at low tide, Gersh said. 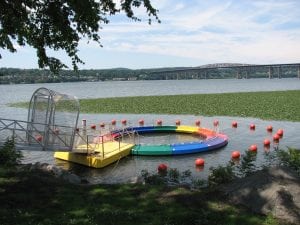 The Hudson River Pool is growing out of its Riverfront Park home in Beacon. (Photo provided)

The idea to open the pool came in the late 1990s from Seeger, the folk music legend and social and environmental activist who died in 2014. Since opening, Gersh estimates that just under 10,000 people have entered the river via the pool, which he says is a cost-free recreational option that teaches its users to care for the environment.

“Pete thought, ‘Let’s test the water and see about creating a pool.’ If people are swimming in the river, they’re going to really want to keep it clean. He felt that was a good incentive,” Gersh said.

With the current pool structure nearing the end of its design life, the River Pool board began discussing the idea of opening a second, larger pool and identified Long Dock Park — opened by Scenic Hudson in July 2011 — as the ideal spot along the Beacon waterfront.

Scenic Hudson Senior Vice President Steve Rosenberg says that the organization appreciates the River Pool’s mission but ultimately doesn’t allow swimming at any of its more than three dozen parks and preserves.

“What the river pool does is very important in terms of connecting kids and families to the river,” he said. “But the added risks to us of having swimming in a setting like that concerned us. Despite everyone’s best efforts, you really have to be a guarantor of the (public’s) safety (in that setting).”

In addition to the other activities at Long Dock — kayaking, fishing, festivals, environmental education and yoga classes — Rosenberg said that swimming would be too much for Scenic Hudson to manage.

For now, the Riverfront Park pool will open as scheduled at the beginning of July and close after Labor Day. Gersh says that the River Pool board may look into redesigning an enlarged pool at its current home or it could seek out a new site for a larger pool.

“We really wouldn’t want to move out of Beacon,” he said, “and we’re going to do our best to keep it here. We are committed to keeping a pool in Beacon, at least for a few more years.”