Haldane hosted its sixth annual An Evening of Rising Stars fine arts recognition awards evening this past Tuesday, May 17.  The red carpet was laid out for a mixture of performances and the handing out of “Villantis,” statuettes so named because former district superintendent Mark Villanti conceived of this event. 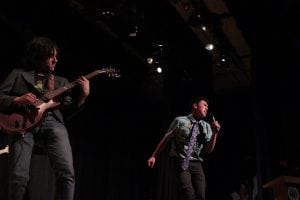 Two student extracurricular music groups, the gypsy jazz trio Cold Spring Caravan and the hard-rocking Blues Devils opened the evening and closed it, respectively, and multiple awards were given in the categories of visual arts, instrumental, creative writing, musical theater and drama, theater tech, and choral.

Cassandra Traina read the Sylvia Plath poem with which she reached the state finals of Poetry Out Loud, and Brian Alm was given a special achievement award for his support of the arts.  He, in turn, introduced Haldane’s new high school principal, Peter Carucci, to the audience.  The evening was emceed by seniors Lucy Austin and Dante Nastasi, and was produced by the Haldane Arts Booster Club, led by its president, Katie Bissinger.