One of the best things about Newburgh’s Motorcyclepedia is that you don’t have to be a motorcycle nut to appreciate what a truly interesting museum it is. Make no mistake — motorcycle connoisseurs and those with a taste for two-wheeled motorized technology will drool when they enter the massive, two-level 85,000 square foot facility, home to more than 500 bikes of every size, design and color dating back to the late 19th century.

But even those with little interest in bikes who find themselves tagging along at the behest of their spouse or their overly insistent gearhead friend will leave hours later with a much greater appreciation of the significant role the motorcycle has played in American history and culture. 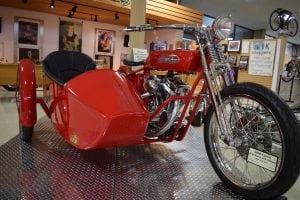 Motorcycles on display that are important way beyond their brand, vintage or top speed include this sampling of four iconic bikes: a 1964 Harley Davidson ridden by the Dallas police officer who put out the first call that shots had been fired during President John F. Kennedy’s ill-fated motorcade; the 1964 Triumph TR6 ridden by Steve McQueen in The Great Escape — arguably the most famous motorcycle movie scene of all time; a 1914 Excelsior Velocipede that Charles Lindbergh traded in to acquire his Jenny airplane in 1923; and a 1939 Kleines Kattenkraftrad, a German combination motorcycle-tracked military vehicle that appeared in the movie Saving Private Ryan.

For purists, Motorcyclepedia’s Indian Timeline, which features examples of every Indian motorcycle manufactured between 1901 and 1953, is the star of the show and a destination in itself. Established in 1897, the Hendee Manufacturing predated Harley Davidson, adopting the name Indian as its flagship brand in 1898. The Newburgh collection, which includes more than 100 bikes, is reputed to be the largest in the world. One of the more noteworthy exhibits is the 1953, 80 cubic-inch Twin Chief that starred along with Anthony Hopkins in the 2005 movie The World’s Fastest Indian. 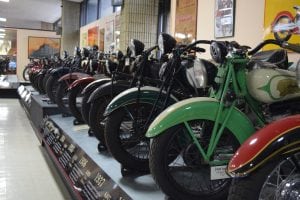 The museum’s collection of Indian motorcycles may be the world’s largest. (Photo by M. Turton)

If Harley-Davidson comes in second to Indian at Motorcyclepedia it’s a close second. The museum houses about 75 Harleys with models dating as far back as 1907. A 1915 Dodge City Racer is one of the Harley highlights along with bikes that were custom built for Billy Joel and Patrick Harley.  Harley-Davidson is also well represented in the police, military and chopper exhibit areas.

The oldest bike in the collection is a 1897 De-Dion Bouton manufactured in Paris. The French trike is the oldest running motorcycle in North America. Even older in design is a meticulously built replica of a wooden framed 1885 Daimler Reitwagen whose 0.5 horsepower single-cylinder engine was capable of producing speeds of up to seven miles per hour.

Other motorcycles preserved in the collection are from such manufacturers as Pope, Iver Johnson, Husqvarna, Moto-Reve, Yale and Thor. A sleek Honda racing bike, the historic Flying Merkel and ultra-futuristic bike from the movie Tron add even greater variety to the collection.

The museum is also home to three “walls of death” or motordomes. “Kamikaze Pit,” a German rider, visits to put on performances several times each year. A wall of death is a large, upright wooden cylinder with a platform along the top that serves as a viewing area for spectators. A motorcycle rider enters the cylinder from the bottom — and then rides on and around the vertical walls at speeds close to 40 mph — held in place only by centrifugal force and friction. 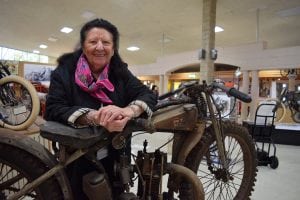 Throughout the museum visitors are reminded of the motorcycles’ place in American culture — from the Easy Rider soundtrack and Mad Magazine’s front cover spoof titled “Sleazy Rider” to Batman comics, Prince’s Purple Rain album cover and movie posters from Elvis Presley’s Roustabout and Marlon Brando’s Rebel Without a Cause — motorcycles as part of American entertainment line exhibit area walls.

Motorcyclepedia was established by Gerald Doerling in 2011. Now 89, he is still actively involved in the museum’s operations. His wife Katie told The Current that her husband, an electrical contractor, began collecting motorcycles in 1947. “He didn’t even ride motorcycles that much — he just liked how they looked,” she said. Their son Ted now handles the bulk of the museum’s operations, assisted by Katie and daughter Anna Reinhard and numerous other volunteers.

A non-profit organization, Motorcyclepedia is located at 250 Lake St. in Newburgh. It is open to the public from 10 a.m. to 5 p.m. on Friday, Saturday and Sunday. Admission is $11 for adults and $5 for children 4 to 12. The facility is handicap-accessible with scooter chairs available upon request. The building is equipped with an elevator.

Rental space is available for parties and special events. Phone 845-569-9065 for more information, including group rates. Additional information is also available at motorcyclepediamuseum.org.