Due to expected thunderstorms, this event has been postponed to Saturday, June 18.

Fishkill Farms in Hopewell Junction will host a Founder’s Day Celebration from 11 a.m. to 5 p.m. on Sunday, May 29, to honor Henry Morgenthau, Jr., who opened the farm in 1914. Two decades later, in 1934, he was named Secretary of the Treasury by President Franklin D. Roosevelt.

The day will include an exhibit of historic memorabilia including war bonds posters, letters between FDR and Morgenthau (who mercilessly teased each other) and photographs of the two owned by the Morgenthau family and the FDR Library Archives. 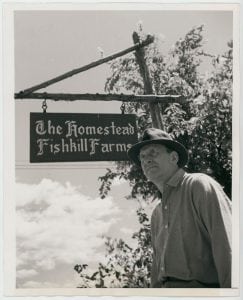 The farm also will screen home videos shot between 1933 and 1942, including footage of a crucial wartime meeting at Fishkill Farms between Winston Churchill, FDR and Morgenthau.

From noon to 4 p.m. Seth Kessel and the Two Cent Band will perform swinging jazz, and there will be complimentary tastings of wine, spirits, cheeses and other artisan products throughout the day. There will also be a pig roast, house jerk chicken, hotdogs, hamburgers, veggie burgers and corn, horse-drawn wagon rides and arts and crafts for the kids.

Tickets are $6 per person in advance or $9 at the door. (The pig roast and wagon rides have additional fees.) Visit fishkillfarms.com. The rain date is Sunday, June 5.