Envisioning a connected and ‘complete’ Beacon

In the weeks to come, The Highlands Current plans to do a lot of walking. One by one, we’re going to “walk the ward” with each of the six members of the Beacon City Council. There’s no set agenda; instead, the series is designed to familiarize readers with what’s happening in Beacon by speaking with the city’s elected officials in their home neighborhoods.

For the two at-large members of the council, we’ll just take a stroll — with no particular destination in mind.

This week The Current spoke with at-large council member George Mansfield on a walk along South Avenue, one of the borders of Beacon’s linkage zone — an area that has been in the news lately as residents there have petitioned the city to limit development in the zone, which was created in 2013 to extend and support Main Street and its businesses.

Historically, Mansfield said Wednesday afternoon, Main Street in Beacon continued further to the west — beyond where City Hall is now. That’s why there’s a West Main Street today that’s disconnected from the rest of Main.

“That was a whole other community down there, prior to urban renewal and the building of City Hall,” Mansfield said. “It basically divorced the riverfront from Main Street. At that time (in the 1960s and ’70s), it was ripe, unfortunately, for urban renewal, but they decimated a whole community [in the process] and cut off the heart of Beacon from its riverfront.”

Now, he says, the goal of the linkage zone — an area that encompasses Beekman Street, West Main and a portion of Wolcott Avenue/Route 9D as it runs in front of City Hall to just beyond the Reformed Church of Beacon — is to reintegrate the river with the rest of the city, in a healthy and sustainable way.

Several years ago, Mansfield said, there was talk of creating a TOD (transit-oriented development) at Beacon’s riverfront. Driven more by the Metropolitan Transportation Authority (MTA) than the community itself, he said the proposal gained momentum for a time but ultimately might have had a negative effect on the city’s economy. 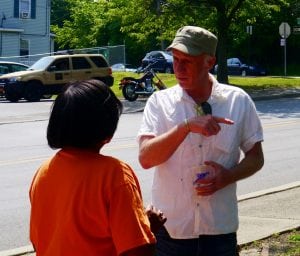 George Mansfield speaking with a constituent (photo by J. Simms)

“Instead of developing down there and integrating it into the community, it would have sucked whatever economic vitality was happening on Main Street down to the river. All the people who had committed so much time to bringing Main Street back were worried that it would undermine everything there,” he said.

“We realized,” Mansfield said, “that for any development by the riverfront to work and benefit the city as a whole, we would have to zone this area to incentivize some development, so it creates a more pedestrian-friendly (community).”

By creating the linkage zone, the city hopes to establish a more natural extension of Main Street — one that encourages walking down to a busy riverfront area — rather than one or the other with little in between.

The city is now seeing the results of the linkage zone, which allows for the most dense residential development in Beacon. The View, a proposal currently seeking planning board approval, would site 50 units along Beekman Street, just behind City Hall. A second development, the approximately 70-unit River Highlands, could be in limbo if the city council accepts the residents’ petition to downzone seven properties within the linkage zone.

And, across Route 9D, residents say they fear “Main Street-style” buildings will be erected on lots currently owned by the Episcopal Diocese of New York and used by St. Andrew’s Episcopal Church. (Church leaders say they plan to eventually develop the two lots, but in a way that fits with the existing neighborhood.)

Mansfield said Wednesday that he anticipates “tweaking” the linkage zoning to achieve the desired effect without overrunning Beacon’s existing neighborhoods.

“I believe Main Street should be going toward the river,” he said, noting that he could one day envision townhomes on South Avenue, but not “big block” buildings.

As the city grows — attracting both added tourists and new residents — a vibrant linkage zone would create a “streetscape” effect, softening the uphill walk from Dia:Beacon to Main Street’s shops and restaurants.

“We don’t want peoples’ experience of Beacon to be limited. Right now we have a geographic impediment to getting up here,” Mansfield said. “It’s a hike. That experience might discourage people. We want to make that experience good for everyone and ultimately have this be a complete city.”

And what could a “complete” city look like in five or six years, with potentially thousands of new residents?

That’s a challenge. Beacon officials must carefully consider the impact of so much added development, Mansfield said.

“Does all this end up as a net profit, tax-wise,” he said, “or does it just make it more crowded and more expensive to live here? It’s hard, because more development does not necessarily mean a healthier environment to live in.

“The easiest thing to do is to build residential condos,” Mansfield continued. “But I want to encourage, down at the riverfront, less residential and more commercial. More office space, where people might do a reverse commute from Westchester or (New York City) and come up here.”

The value of added office space in Beacon, particularly along the waterfront with easy access to the Metro-North train station, he said, would be significant. Schools, police and emergency responders wouldn’t see a substantial uptick in the need for their services, but the city’s economy would get a much-needed boost of diversity. No longer a bedroom community for hundreds of New York City commuters, in time the entire face of the city could be changed.

Can it happen? Perhaps that’s a topic for another walk on another day.

“I think Beacon is unique in a lot of ways,” Mansfield said, sitting in the Main Street mini-park once known as Bank Square, across the street from the Bank Square coffee shop, “and we have to play our cards smartly. We do have a great community. A lot of people want to be here, and I think a lot of offices, ultimately, will want to be here too.”