On Saturday, June 4, the closed gates to private gardens in Garrison, Cold Spring, Kent, Carmel, Putnam Valley, and Brewster swing open for a cause. The Putnam County Secret Garden Tour, now celebrating its 10th anniversary, sells tickets for entry to nine gardens total — admission to the public Boscobel and Stonecrop are included — to raise funds for county children and adults with developmental disabilities who are served by Partners with PARC. (Tickets are $30 in advance at PutnamSecretGardenTour.com; same day, $40; 10 a.m. – 4 p.m.; rain or shine.)

The gardens include vast shady green ‘vignettes’ amid forest terrain, cottage gardens, herb and flower-cutting tracts, and vistas of field and water. (According to Horticulture Magazine: “When you look at a large garden, your eyes dart about, looking for a place to rest. Successful gardens incorporate vignettes—mini-gardens that make up a unified, cohesive garden plan. Possible focal points of a garden vignette include: A specimen tree or shrub, bench, urn, statue, small water feature, birdbath or birdhouse.”)

Arthur and Carolyn Ross have embraced many Japanese concepts into their naturalistic gardens across five of their ten acres of land. An open lawn near the Ross home — once a small cabin, it is still a modest, low-lying structure but with a large deck — leads your eye to views of the Hudson. Otherwise, the landscaped acreage is interlaced with abundant native evergreens and deciduous trees as well as azaleas and other mature species that have grown nearly to tree size. 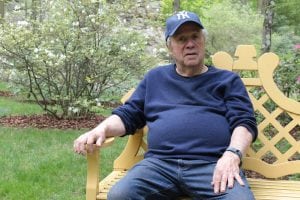 Arthur Ross telling the story of how he built his gardens amid 10 acres of thick forest. (Photo by A. Peltonen)

Before he shows a guest his garden, Arthur sits down and quietly tells the tale of how he built it — and also how it has sustained him through personal struggle and loss. Today it gives him great peace, he says.

Arthur does a tremendous amount of hands-on gardening. His favorite flower is the light blue forget-me-not, which you will see interlaced amid the beefy leaves of hostas and wild ginger, under shrubs and trees, and tucked alongside the many stepping stone paths that lead from one garden area to the next.

Arthur and his wife Carolyn bought their land rough in 1975. His first year, he planted 300 tulips but deer ate them all. He knows a lot better now, having competed with a friend who creates cottage gardens. At one point, his friend Frank Cabot (of Stonecrop Gardens) told him what his property needed: water, which the Rosses excavated for and which now falls in a slim curtain over a rock cliff into a stream. 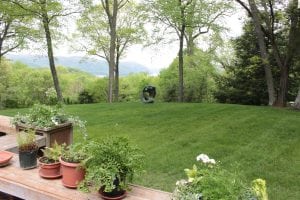 View toward Hudson from deck of the Ross home - which started as a small cabin and,, though added to, still maintains a low, modest footprint with a Japanese aesthetic. (Photo by A. Peltonen)

Arthur designs his stone walls and beds and Mario Gregorio builds them. A hanging glass mobile by Carolyn hangs above a koi pond. Metal and clay sculptures repose elsewhere.

The Willis property, also in Garrison, is in the style of a large cottage garden, but with local variations including some stunning mature evergreen trees. Borders are filled with hostas and ferns, but the irises and peonies are busting open now and should be in perfect form for June 4.

Set around a handsome 1890 brick carriage house that was an outbuilding of the estate of a famous Sing Sing jail chief, Lewis Lawes, there are open spaces in full shade and full sun, a slate-decked pool surrounded by shrubs, flowers, and vines, and a newer sunken garden built inside the foundation of an old stable.

Lawes abhorred the death penalty and tried to have it abolished, although his position forced him to oversee scores of executions, which reportedly made him ill. Although little is written about Lawes’ wife Catherine, she was also reputed to have strong compassion for prisoners. 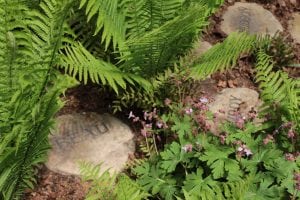 Gardens of Suzanne Willis and Ed Drake. Stepping stones mark the memory of deceased family pets. (Photo by A. Peltonen)

Lewis Lawes wrote prolifically about prison reform, including the book 20,000 Years at Sing Sing, which he helped turn into a movie starring Spencer Tracy and Bette Davis [see IMDB for more].

Today, it’s Herb the outdoor-loving black standard poodle who reigns over the grounds here. Suzanne Willis and her husband Ed Drake have placed rounded stones under their shade plants that are engraved with the names of deceased family pets.

The Putnam County Secret Garden Tour is self-guiding driving tour from one destination to the next.

One thought on “Preview of Secret PARC Garden Tour”