Which legal opinion will prevail?

The biggest and most complex development in Cold Spring since the establishment of the West Point Foundry in 1818 still faces what is perhaps its last hurdle. The Butterfield development project was again the focus of the village planning board on May 26, two weeks to the day after a heated meeting broached the same topic.

Other than a less confrontational tone, little had changed as the board again considered what has become a controversial proposal for a change in use as part of the build-out of the former hospital site.

In an application submitted by Butterfield Realty on April 22, developer Paul Guillaro proposed swapping uses between two buildings. The senior citizen center and post office originally slated for Building No. 2, part of the new construction, would instead move to the Lahey Pavilion, an existing building that currently houses The Medical Center at Cold Spring. The medical facilities in Lahey would move to Building No. 2, a switch that is proving to be not so simple.

The crux of the matter

The core issue is which legal interpretation of the village code will determine how many parking spaces must be provided at the relocated senior citizen center. Guillaro’s attorney Steven Barshov did not attend the meeting but two weeks ago he was emphatic in asserting that “the code is not ambiguous … It says no additional parking shall be required. It couldn’t be clearer than that.” In his view “no additional parking” means 35 spaces as identified in the site plan approved last November.

At the May 26 meeting, Guillaro reiterated that argument. “We went through a lengthy SEQRA (State Environmental Quality Review Act). The approval took three years,” he said. “This was all evaluated. We addressed all this at that time. We had a parking table and we need to adhere to [it.]” The table he referred to identified 35 parking spaces at Lahey. 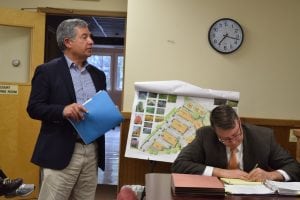 Village Attorney John Furst responded with the counterargument, pointing out that the application introduces new uses at Lahey. That, he said, “changes the parking calculations … The switch of uses triggers a new parking table.” Furst said his revised table would require 56 parking spaces.

Parking spaces don’t generate revenue, a point not lost to Guillaro. “The only place the spaces [can] come from is for me to reduce the size of my development,” he said. “There’s nowhere else.” He added that the proposed change moves the two uses by only 70 or 80 feet. “It may be an issue code-wise,” he said, “but from a practical standpoint it shouldn’t be an issue.” He suggested that the planning board ought to reconsider its position and “say what we can do to try and work things out here.”

Timing was also on Guillaro’s mind. He asked a number of times about the schedule for moving his application forward. “Whether you approve or disapprove [the application], it’s fine with me,” Guillaro said. “I need to get to an end result. Are we [saying] the next meeting will resolve something?”

“It shouldn’t be more than a couple meetings,” Planning Board Chair Matt Francisco replied. “We’re going to work as quickly as we can to move forward.” He indicated that board members would work “offline,” meaning they would discuss the application by email or one-on-one prior to the next meeting. However, any decisions would have to be made in public session, he said.

Mayor Dave Merandy was in attendance and said he planned to meet on May 28 with the lawyers from Rodenhausen Chale, the Rhinebeck law firm that is providing the village with a second opinion regarding Furst’s and Barshov’s differing views. Contacted by The Current on June 1, Merandy declined to comment on the outcome of that meeting. Guillaro said that he has also sought a second legal opinion, adding, “there is no way” the village could win if the matter ends up in court.

It always goes back to the code

Numerous questions and opinions related to parking were posed during the nearly two-hour meeting, one in which discussion often wandered in a circular and repetitive fashion. Issues such as the developer’s need to demonstrate how shared parking will function on the Butterfield site, the formulae for parking spaces per square foot of building space, non-conforming parking spaces, underground parking, the planning board’s ability to issue up to a 20 percent parking waiver, the effect of designating Lahey as a public meeting place and how the amount of seating planned for the senior citizen center might affect the number of parking spaces required. But in the end, just as it had 14 days earlier, it remained clear that a resolution of Barshov’s and Furst’s starkly contrasting interpretations of the village code will determine what happens next, or when.

While the May 26 meeting was much less fractious than the previous session, the public comment period did raise some hackles.

Cold Spring resident James Geppner commented that the idea that the senior citizen center and post office planned for Butterfield are “somehow a gift from the developer … misrepresents everything that has happened over the past few years.” He said that there was an opportunity a long time ago to come up with a plan that that would benefit the village widely but that “the village was widely ignored. There was arm twisting, misrepresentation, lies and every type of bullying.” 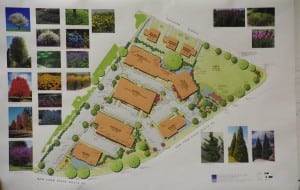 A landscaping plan for the development from March 2015 (file photo)

Geppner described the planning board as having been “immensely reasonable and accommodating” but characterized comments on Butterfield at the county legislature as “outrageous.”

When county legislator Barbara Scuccimarra responded that she was offended by Geppner’s comments, he retorted, “I’m glad!”

She then addressed the board, commenting that it is “making more out of this than it has to be,” also referring to its meeting only once a month. When Francisco corrected her, stating that the all-volunteer committee meets twice a month, she replied, “Well, maybe you should meet more often.”

That didn’t sit well with Francisco, who admonished Scuccimarra for having described the planning board as “obstructionist” in a recent article in the Putnam County News & Recorder. “To suggest [that], or that we have an agenda or … that we hate senior citizens, to the extent that you convince people of … these lies, you fray the fabric that makes up this community,” Francisco said. “People understand that there’s a code to be applied. That’s it. There’s nothing more.”

Earlier on May 26, a meeting initiated by County Executive MaryEllen Odell to discuss Butterfield was held at Philipstown Town Hall. Deputy County Executive Bruce Walker, Scuccimarra, Philipstown Supervisor Richard Shea, town board member Mike Leonard and Merandy attended along with Odell. No one from the Cold Spring Planning Board attended. Contacted by The Current, Francisco said he was not asked to take part.

In a June 1 telephone interview Merandy said that nothing significant came out of the meeting. He indicated he will continue to pursue a second legal opinion and hopes to address the issue at the next village board meeting.

Shea was more positive, commenting to The Current that “It’s always good for municipal officials to sit down and talk.” He said discussions included of such issues as traffic and parking at Butterfield along with possible improvements in transportation services for seniors.

Unedited video of the May 26 planning board meeting is available below.

2 thoughts on “Butterfield Still Under the Microscope”