A pair of second legal opinions may actually increase the chance of a courtroom showdown over a change of plans proposed by the developer of the former Butterfield Hospital site in Cold Spring. At the June 7 meeting of the village board, Mayor Dave Merandy announced that based on a second legal opinion received recently, the planning board will continue to process the Butterfield application as a “change of use.” Considering comments made by the developer two weeks ago that decision could ultimately result in a court battle.

In late April, developer Paul Guillaro submitted an application to the Cold Spring Planning Board that included a swap in uses between two buildings as part of the multi-use redevelopment. The revised plan places the senior citizen center and post office in the Lahey Pavilion, a building not included in the site plan approved in November 2015. The new plan will see the medical offices currently located in Lahey move to Building No. 2, now under construction. That building was originally designated to house both the senior citizen center and post office.

At the May 12 meeting of the planning board, Guillaro’s attorney Steven Barshov argued that the change was minor and that the zoning for Butterfield made it clear that the 35 parking spaces identified for Lahey would not have to be altered. “The code is not ambiguous,” he said at the time. “It says no additional parking shall be required.” Guillaro reiterated the same argument at a meeting two weeks later.

John Furst, the village’s attorney, saw the application very differently, arguing that the proposed swap is a change in use that necessitates a revised table that would increase the number of parking spaces at Lahey to 56.

Guillaro put his stake in the ground at the May 26 planning board meeting, commenting that he had sought a second legal opinion and believed that if the difference in legal interpretations were to go to court “there is no way” the village could win.

Faced with disparate legal views and possible court action, Merandy sought a second opinion as well from Rodenhausen Chale, a Rhinebeck firm specializing in municipal and land use law. 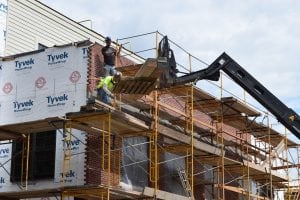 Construction continues at Butterfield, as does legal wrangling. (Photo by M. Turton)

At Tuesday’s village board meeting Merandy said that he and Planning Board Chair Matt Francisco recently spoke with a lawyer from the firm confirmed Furst’s interpretation of the code as valid. “We are encouraged and feel comfortable in moving ahead in asking for the application,” the mayor said. “Basically we feel comfortable [that] this is a change of use … and we’ll be applying our code to that change.”

The mayor added that Francisco “understands the need to have this done as quickly as possible” and that the planning board will deal with Guillaro’s application at its next meeting, scheduled for 6 p.m. on Friday, June 10. That meeting had originally been scheduled for the previous evening.

Merandy said the planning board is waiting for information from the Deputy Putnam County Executive Bruce Walker regarding the amount of seating proposed for the senior citizen center, a factor that could affect the parking table.