The Philipstown Majors division kicked off the playoff season with the third game between the second-place Mets and the third-place Yankees. Previous games as reported in these pages had been one-run victories for the Mets – an indication that these teams were evenly matched.  The final meeting between these two teams this season proved the same point. In the first inning both teams scored single runs after which they got nothing but goose eggs for the next three. 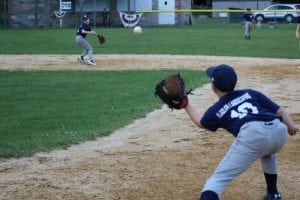 The Yankees came out of the box determined not to let the previous two losses deter them. The first four batters reached. One run was in and the bases were loaded. Mets pitcher Julian Ambrose then bore down and struck out the next three batters to keep the game close. In the bottom of the first inning leadoff man Giancarlo Carone worked a walk, stole second, advanced to third on a ground out and made a daring steal of home just sliding in under the tag. And so it stayed tied 1-1 for three more innings.

Yankees pitcher Daniel McElroy followed in the fourth inning by Terence O’Driscoll kept the Mets off the board. The Yankee fielders recorded 5 of the next 9 nights with flawless defense – with first baseman Jordan Albertson recording five outs himself over the first four innings.  The Yankees made 5 of the 9 beginning in the second inning with flawless fielding. On the Mets side, Julian recorded 7 of the 9 outs via the K, snared a line drive off the bat of William Bradley, and with Tommy Tucker on third as a result of a long triple to right center field, cleanly fielded a ground ball and threw Tommy out at the plate. 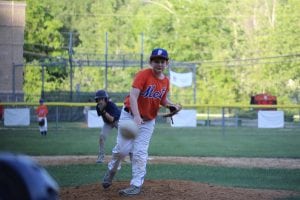 Mets pitcher Robert Viggiano delivers pitch in the top of the sixth inning with Jonathan Bradley at second base.  (Photo by Linda Bolte)

In the top of the fifth, after two outs were recorded, Daniel took off his pitcher’s hat and put on his DH hat, launching a moon shot over the right field fence that clanged off the metal bleachers for a two-run homer. Further damage was averted as first baseman Robert Viggiano recorded all three outs at first base, two on ground balls to Blake Bolte and third and West Watman at second and one on a converted third strike throw from catcher Giancarlo.

In the bottom of the fifth, Terence pitched around a lead-off double by Alex Klybas striking out the next three batters to hold the lead.  The Yankees added an insurance run in the top of the sixth on a steal of home by Jonathan Bradley.  With a three run lead going into the last of the sixth, the Mets threatened. Conrad White led off with a single and scored on a single by Julian.  Terence bore down and closed out the game, limiting the Mets to that single run in their comeback attempt. The two previous games had ended with a strikeout stranding the tying run on base. This time, the tying run was at the plate but a strikeout ended the threat. 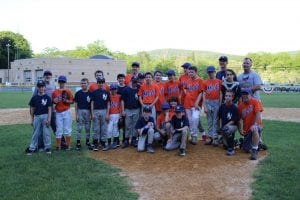 The Mets and Yankees celebrate three outstanding games against each other. (Photo by Linda Bolte)

The Yankees meet the first-place Dodgers in the championship playoff game at 9 a.m. on Saturday, June 11. Later that day, the minors division finalists (teams decided via two first-round playoff games on Tuesday) will meet in their championship game.