Sometime after 1:30 a.m. on Sunday, June 5, a wooden sculpture of a yawning man created by artist Jon Reichert was knocked over at its site next to the Beacon Bread Company at 193 Main St., breaking into three pieces. The sculpture was installed in advance of the 4th annual Beacon 3D exhibit of public sculpture works. Although that night was marked by a series of particularly strong wind storms, Beacon’s Chief of Police Doug Solomon confirmed to The Highlands Current that the act was intentional.

“I was surprised by the vandalism but always realized that this type of thing comes with the territory when you present art in a public venue,” said Eleni Smolen, the curator of Beacon 3D. “The artists realize this as well. Fortunately it has been the exception and not the rule and I know the community is, by and large, very supportive of this project.” 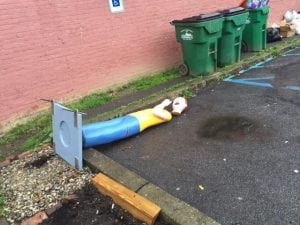 The Yawner on June 5. (Photo by Eleni Smolen)

Created over the course of four months, Reichert’s sculpture The Yawner consists of more than 100 pieces of wood stacked and clamped together in 12-inch sections before carving. When the work was installed two weeks ago, Reichert used a series of threaded, foot-long, quarter-inch-thick metal spikes to secure it into the ground. The vandals bent the spikes and left handprints on the statue’s chest.

As to why someone would be driven to put such an enormous amount of effort into destroying something so whimsical, Reichert is stumped.

“Yawning is something we all do, and I wanted to see if I could make a sculpture that would make people yawn,” he said. “Most sculptures of people are pretty heroic, and of course usually you don’t want someone’s reaction to your artwork to be a yawn. But that was my intention with this.” 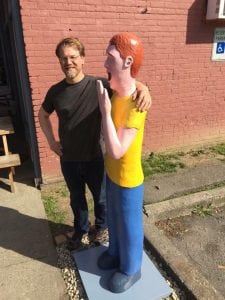 Sculptor Jon Reichert with the Yawner after installation. (Photo by Eleni Smolen)

Reichert said he has been surprised by other interpretations of the piece. While many of the reactions were positive, with scores of visitors photographing themselves yawning next to the piece or hugging it, some suggested it was a cynical comment on the perception that Beacon’s status as one of the Hudson Valley’s hippest towns is over, and that the city is now passé. “That says a lot more about the people who are making that interpretation than it does the statue itself,” Reichert said.

The artist Erica Hauser, who is married to Reichert, observed that “the fact it’s life-sized and somewhat realistic may have had something to do with the reaction, as well. Beacon’s had lots of outdoor sculptures of people before, but they haven’t been as representational as this.”

While the Beacon police are examining footage taken by nearby security cameras, the Beacon arts community is already springing into action.

“BeaconArts is working with Jon directly to get him the resources he needs to repair and reinstall the work,” said its president, Dan Rigney, in a statement. “Meanwhile, we’ve initiated a social media campaign called #TheYawnIsOn to express solidarity with a hard-working artist who has contributed a great deal of himself to our community. Celebrate The Yawner’s return by contributing a yawn of your own.” 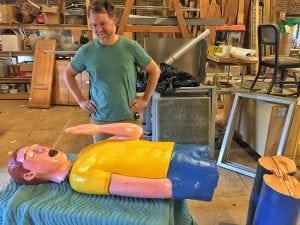 Sculptor Jon Reichert with the remains of The Yawner. (Photo by B. Cronin)

Those who wish to contribute to the statue’s restoration can visit beaconarts.org/donate and select “The Yawn Is On” under the list of causes.

In the meantime, Reichert isn’t sure when or where The Yawner will return. “I hadn’t really blocked off time in my schedule for something like this, obviously,” he said. But there’s optimism that Main Street visitors will be yawning again sooner rather than later. Late on Wednesday, Reichert posted a picture to Facebook of the sculpture dry-fitted back together. A little battered, a little bruised, a little shaky, but standing once again.

“To yawn another day,” read the caption.