As many as 160 bird species have been known to live in Black Rock alone, where the designation was announced on June 4. About two dozen of those species — including cerulean warblers, wood thrush and prairie warblers — are considered threatened, according to Audubon.

“IBAs are the most important places on earth for birds,” said Erin Crotty, the executive director of Audubon New York. “Large, contiguous forests, like this IBA, are crucial to the survival of breeding forest songbirds.”

Black Rock and Schunnemunk together cover nearly 15,000 acres. By adding them to the existing Hudson Highlands West IBA, which includes parts of Storm King State Park and lands west of Schunnemunk, Audubon has designated a huge swath of lower New York as the type of healthy, well-managed forest that’s necessary to host diverse, thriving bird populations.

“These are birds that require large tracts of contiguous forest. They just can’t survive in small patches,” explained Bill Schuster, the executive director of the Black Rock Forest Consortium, the organization that manages the 3,800-plus-acre forest. Without that connectivity, Schuster said, birds are more likely to suffer  increased predation, disease and parasitism. “Fortunately, we’ve got that (connectivity) in the Highlands — on both sides of the river.”

While Black Rock and Schunnemunk are both located in Orange County, as the crow (or blue-winged warbler) flies, the lands are just minutes from Philipstown and Cold Spring.

“The Hudson River is a real physical barrier to people. You have to drive your car and pay a toll,” said Eric Lind, the director of the 270-acre Putnam County Constitution Marsh, also designated an IBA by Audubon. “But from a bird’s point of view, it’s a matter of minutes.”

The deciduous forests of Harriman and Fahnestock state parks are remarkably similar to Black Rock and Schunnemunk in type and the species they support, Lind added.

On this side of the river, other places like the Cornish Estate and Breakneck Ridge provide tremendous natural diversity for nesting birds, skinks, snakes and other wildlife species, according to Cold Spring birder Lew Kingsley. “This is an unusual habitat because of the streams, meadows, marches and woodland fringes,” he said. “It’s an amazing area for a diverse bird population.” 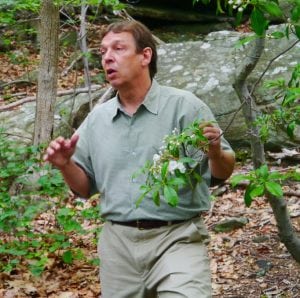 For the western Highlands region, which faces development threats along Route 32 and the New York Thruway in particular, the IBA designation is a “very big step and a very big deal,” he said.

While having an IBA within its boundaries doesn’t bind local municipalities in any way, Schuster said he’s hopeful that planning boards and other government bodies will recognize the importance of Audubon’s announcement. Initial feedback seems favorable.

“This designation can be a significant tool for community and land use planners in both the preparation of area plans as well as the review of development proposals,” said Orange County Planning Commissioner David E. Church. “By knowing in advance where important habitat is, we can be smarter about our activities and investments, and we can proactively avoid or lessen impacts from public and private land development decisions.”

If birds are allowed to thrive, species like the wood thrush will continue to provide the choral backdrop to the region’s outdoors, while also performing natural, otherwise useful functions, Schuster said. By keeping numbers of the invasive gypsy moth at bay, for instance, birds have now naturalized that threat. Birds also play a vital role in seed dispersal, which keeps cherries, grapes and other native plants generating.