Recipe: a grill, spices, marinated veggies and a personal history

Sokhara Kim misses the restaurant she ran for eight years. Her friends and former customers miss it as well. Sambata Cuisine, as it was known, brought the seldom-highlighted food of her native Cambodia to the Hudson Valley. “A lot of my friends keep asking me when I can do it again, and I can’t, but I realized I can do a food cart,” Kim explained last Sunday, as a steady flow of customers pulled over on Route 9 to the complex just north of the entrance to East Mountain Road South, which includes Kim’s other businesses, Nice ‘N Neat Dry Cleaning, Apsara’s Nail & Spa and an art gallery devoted to works by her husband, Chakra Oeur. 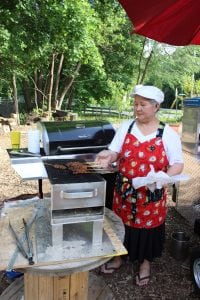 Sokhara Kim, tending to the grill at the Cambodian Food Cart on Route 9.  (Photo by A. Rooney)

A mention on the Philipstown Locals Facebook page elicited a long stream of eager replies, and Kim served up lots of steak sandwiches filled with the grilled meat marinated in Cambodian spices, including lemongrass accompanied by carrots, coriander and cucumber pickled in rice vinegar, served inside a choice of whole wheat or white rolls, or platter style, for the easy to swallow cost of $6 each. This marked the beginning of what Kim plans as a regular weekend endeavor, with the menu changing constantly. “Everyone wants the dumplings,” Kim confided, with distinct promise in her words. “I love to make this food; seeing people enjoy it makes me very happy.” (The dumplings made an appearance during the second go-round last weekend.)

The meals can be consumed right there, in the pleasant garden which Oeur has created as an oasis from the Route 9 traffic whizzing by. Many sculptures adorn the garden, which also extends out the back, where Oeur’s sculpture restoration studio can be seen. Some tropical plants, including a palm, give the gardens a balmy feel, while the sculptures, including one of Jayawaman 7, his name loosely translated into “winner of war” and another, of Kram Ngoy, whom Oeur calls “the Cambodian Mark Twain” as well as others echoing the Apsara figures found at Cambodia’s Angkor Wat and the Bayon, all made by Oeur, invite curiosity about the culture they represent. “My idea is not to buy anything fancy and to make it look like natural,” Oeur said of the place he created from tilling the land around the property and taking the rocks out, building a garden from them and the bent wood which forms gates and trestles, adding, “They take me away from my country, but they can’t take the beauty of my country away.” 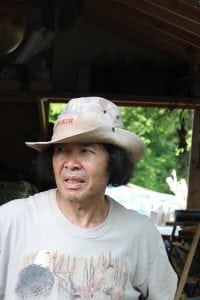 Sculptor, former ”freedom fighter” Chakra Oeur has both a studio and gallery on the premises.  (Photo by A. Rooney)

Oeur expanded on this, explaining how, after very difficult years spent in Cambodia during the time of strife which afflicted that land for so long, he arrived in the United States as a sponsored immigrant, settling in the Washington, D.C. area. “I asked them to take me somewhere there are museums and galleries” he says. It was through a critical illness that he re-connected with Kim, 10 years ago. They had met previously. “I was a freedom fighter, she was a refugee,” Oeur relates, but went on to their own, separate lives. Diagnosed with kidney failure, Oeur was placed on a waiting list for a kidney donation, and his immediate family and good friends weren’t good matches. “My doctor told me to check with all the Cambodians I knew, and I contacted Sokhara; they tested her blood and she cried, happily, because it matched.” 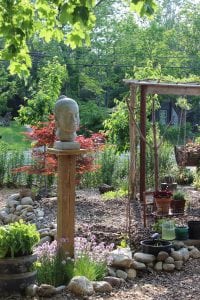 The peaceful garden, dotted with Khmer statuary, belies the fact that it’s situated off Route 9. (Photo by A. Rooney)

After the transplant, Oeur moved north, soon after the fire which destroyed the original incarnation of Nice ‘n Neat. Together they have re-built and expanded into the other businesses. In addition to working from his studio, doing restoration work for cathedrals and other repositories of statuary, Oeur does his own work, some of which is displayed in his gallery, which he calls The Killing Field Gallery, reflecting the name by which the mass graves of thousands of Cambodians killed in that country’s genocide is commonly known. Much of Oeur’s own art reflects this past, and he speaks impassionately about these ravages. “That’s why I created this gallery, I wanted to tell the truth.”

Whether one’s aims are simply to pick up a light and refreshing Asian-flavored meal to eat there or at home, or to learn more about the history and culture of Cambodia, which Oeur is eager to impart to anyone interested, come by 3154 Route 9 on a Saturday, from 3 to 6 p.m. or a Sunday, from 11 a.m. until sunset. “We come from an outdoor culture,” Oeur notes, “We’re here all day.”