Depot Docs’ 10th season comes to a glorious finale on Friday, June 17, with Jessica Edwards’ inspired and inspiring bio-doc, Mavis! If your next question is “Mavis?,” think the Staple Singers and the voice that sang lead for the homegrown sound of gospel, R&B, soul and pop that filled the national airwaves for a quarter-century while providing the musical accompaniment to Dr. Martin Luther King on his campaign for civil rights.

If you’re still drawing a blank, listen to Al Bell, the legendary Stax Records impresario interviewed in the film, as he explains why he worked to get the woman in question into a solo recording career: “I respected and loved Aretha, and still do, but she wasn’t Mavis Staples.”

Still performing with her inimitable power and passion at 75, Mavis Staples began singing gospel in Chicago’s black community churches with her brother and two sisters under the tutelage of her father, Roebuck “Pops” Staples, in 1950 when she was 11 years old. Even then, it was clear that she’d been blessed with an extraordinary vocal instrument and matching performance chops. Together with Pops’ Mississippi Delta blues guitar and the family vocal harmonies, Mavis and the Staple Singers evolved over the ’50s and ’60s to become a national phenomenon, both the unmatched musical voice of the civil rights movement and contemporary pop hit crossover artists. After signing with Stax Records in 1968, the Staple Singers reached the Top 40 eight times between 1971 and 1975. 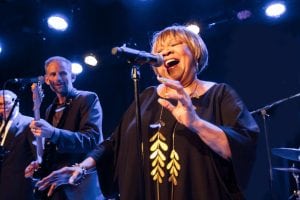 Of course, that only takes us to Mavis’s 35th birthday, with 40 years of musical legend-making still ahead. Edwards’ loving and musically astute film — the first feature documentary on Mavis and her family — premiered at the South by Southwest Film Festival in 2015 and screened nationally and on HBO in February of this year. Combining arresting archival TV recordings and film documenting the rise of the Staples family to national prominence, with a running thread of contemporary footage of Mavis on tour (always with sister Yvonne, who sings back-up and, as family, has her back), Edwards gives us not only an up-to-the minute “life” but a postwar history of the U.S. at the intersections of race, the struggle for civil rights, war and civic unrest, and Mavis and the Staples’ part in the soundtrack to all that.

Along the way, savvy commentary is provided by A-list musicians and music business cognoscenti, often identified as “family friend,” among whom are Bonnie Raitt, music critic and Staples biographer Greg Kot, Bob Dylan, civil rights activist and congressman Julian Bond, rapper Chuck D, Wilco’s Jeff Tweedy, and singer Sharon Jones. In two especially moving sequences, we see Mavis performing with Prince in the 1980s after he invited her to work with him, and on a visit she makes to Levon Helm, of The Band fame, at his home in Woodstock, not long before his death in 2012.  His voice is weak, but he joins in singing with Mavis.  He was, she says, family. 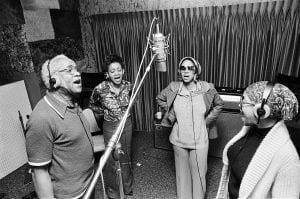 All of these many and disparate pieces are beautifully, seamlessly woven together by editor Amy Foote, whose work was last seen at Depot Docs in 2010 in another winning music documentary, For Once in My Life.  And director/producer/writer Edwards, whose 2013 book Tell Me Something: Documentary Filmmakers, features advice on documentary filmmaking from some of the greats (Maysles, Pennebaker, Kopple, etc.), would seem to have taken whatever she needed from her mentors to join technique, sensibility, and affection in a masterly celebration of an American treasure.

Mavis! will be shown at 7:30 p.m. on Friday, June 17, at the Philipstown Depot Theatre on Garrison’s Landing. Edwards and Foote will be present for a Q&A and reception after the screening. For more information, visit philipstowndepottheatre.org. For tickets, go to brownpapertickets.com.