The one thing that Andrew Chmar sees as a thread throughout his working life is his commitment to working for the greater good. As a child of a military officer and then as an Army officer himself, leading missions all over the world, he said, “I learned from my father the idea of selfless service, helping achieve something greater than making more money. You can serve many things, but serving a constituency, like the community that this land trust exists for, it’s a tremendous satisfaction. [It comes from] seeing that people are being helped, making the community better,” he said.

Not surprisingly, when asked about his plans for the future, his answer involves a connection to land, in this case, a family homestead. When Chmar retires from the Hudson Highlands Land Trust this week, he’ll be going back to the place he’s called home since childhood after a lifetime of moving around the world, even though he’s been settled in Philipstown for 16 years. The mountains of North Carolina have always been the center for his extended family, and he and his wife are moving to land that has been in his family for 85 years — 300 acres purchased by his grandfather to create a place that has been home to three generations and will be home to many more, Chmar anticipates. 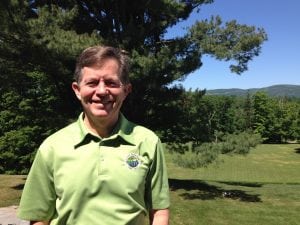 During his 12 years as executive director and one year as a board member prior to that, he built HHLT into a nationally accredited land trust that has conserved nearly 2,300 acres in its coverage area, which includes Philipstown, Putnam Valley, Highlands and Cornwall. This land covered by conservation easements is set aside from development in perpetuity, a lasting legacy for future generations to enjoy the natural beauty, vistas and open spaces.

Chmar, who called this his third career, brought extensive management experience to the position, even though his exposure to conservation began when he was approached as a property owner with a proposal for a conservation easement. He was working in the private sector for a compensation-consulting firm when the HHLT position was open. That four-year stint had followed more than 23 years in the Army as an officer, leading missions. “I really wanted to do something completely different each time,” he said. “When this opportunity presented itself, it was another challenge.”

During Chmar’s time leading HHLT, climate change has become a growing threat. “Our focus is on our core mission of land conservation,” he said. “We know if we do that, then it will benefit these other aspects.” One of the resources that HHLT also provides is support to landowners dealing with invasive species on their land. In the future, Chmar thinks  HHLT will partner more with organizations like Scenic Hudson that have conservation scientists on staff to help mitigate the impact of climate change on the communities they serve.

He cited the Hudson Fjord Trail as an example of a project HHLT has been involved in that can be a model for climate resiliency. The trail can be a living flood management system for railroad tracks. “This is the thinking that needs to be part of the trail both from an environmental and engineering perspective,” he said. “It has to be designed to flood as an important part of their design.”

Even though Chmar and his staff tripled the acreage that has been conserved in their coverage area, he’s confident that his successor, Michelle Smith, and the team won’t run out of work. He said that there is the potential for another 1,000 parcels to be protected. “One hundred years from now, the land trust will still be here,” he said.

Of the accomplishments he is most proud of, he said that his staff, the organization’s growth and HHLT’s recognition as an asset to the community were his most memorable. “That we’re perceived as a community partner, here to help, is a change in paradigm from what people thought of the land trust 12 years ago, and I’m most proud of     that,” he said. He described the transition process with the incoming executive director as seamless and that to move to new leadership without any trauma was a huge success for him. That the organization continues without any setbacks was his key objective as he planned his exit. “We’re ready for new energy and new ideas. We’ve been very methodical in our succession plan to make a seamless move from one leader to the next,” he said.

Reflecting on his experience, he said that he’s learned to be a better listener and more effective team leader, but most importantly, he understands that you can’t please everyone. “Not everyone is going to agree that the environment is important and that conserving land is for the public benefit. You have to move on,” he said. One final note, he said: “I’m really optimistic for the future of the organization and hope to come back and see the Fjord Trail being built.”