Adele “Addie” Westerhuis has been named salutatorian of the Haldane High School Class of 2016. Her academic accolades include best overall performance in U.S. History; best overall performance and most outstanding delegate in Model UN; highest average in biology; best effort in AP World History; and student of excellence in pre-AP Spanish. She spent multiple years in the Academic Hall of Fame and was a member of the National Honor Society.

Westerhuis was involved in peer mentoring, received the American Citizenship Award, sang in chorus and served as president of the Model U.N. club. She also participated in Fashion as Art; stage crew and prom committee. She ran track for four years, also serving as captain. 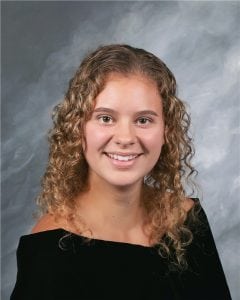 Westerhuis will be attending Boston University in the fall and plans to major in international relations, while continuing to study Spanish and “hopefully picking up a new language as well.”

She calls choosing Haldane “honestly one of the best decisions I’ve made in my 17 years of life. Haldane has been essential to my growth as a person, and to the development of my goals and passions. The teachers have encouraged me to push myself, and have helped me to achieve all the goals I set over the last four years. Haldane has helped me give back to the community and the people who have supported me, and I’ve learned so much about how we can help create change through the programs Haldane offers. The New Orleans trip was something especially unique and eye-opening, and has inspired me in so many ways.”

One thought on “Haldane Class of 2016 Salutatorian: Adele Westerhuis”