“I just want to practice and play Gypsy Jazz all the time.”

Sara Labriola was emphatic about not wanting to play music. “I’m not going to. I’m going to be the different one.” That was her mindset during the earliest years she can remember (she doesn’t have to go back all that many — being currently 17). Growing up in Garrison in a very musical family, her father Art, a Grammy-, Emmy- and Clio-award-winning composer and music producer, and her mother Stacy, a singer/guitarist and member of the MotherLode Trio, Sara took the requisite piano lessons, but didn’t catch the bug.

As these things happen, though, when guitars are a part of the household landscape, at around age nine, Sara picked one up. “I was sitting around, and my mom showed me some chords. It just clicked; I learned so much and moved forward very quickly and decided it would be so nice to be awesome at guitar,” she recollects. Awesome at guitar she did indeed become, and in fact in just a few short weeks she will be moving to Brooklyn and beginning her professional life as a musician specializing in Gypsy Jazz, joining the relatively few women playing in that genre. 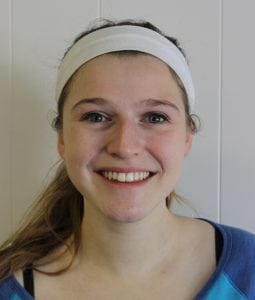 Sara Labriola  (Photo by A. Rooney)

The strumming and chord-learning wasn’t just the passing fancy it can be for kids. By the end of middle school, Labriola could already see herself becoming a musician, despite having “no idea what it entailed.” At first, she emulated her mother: “The folk, finger-style playing is what I did first. By around 12, though, I decided ‘I’m going to play rock — it’s cool, and you get to nail the solos! I really thought I’d be a rocker. But around 14 I got into classical guitar. I printed out a classical piece and decided to learn it. It really works your fingers, and helped so much with my development. I wanted to go to Juilliard, play at Carnegie Hall. But after a while, I wanted to be able to improvise more and just have more fun. It’s not to say that classical isn’t amazing, but I wanted to express myself a bit more. That’s when I started Gypsy style.”

Around 15 at the time, Labriola says that’s considered old in parts of the world where Gypsy Jazz is most popular. In its stronghold of France, children begin early. “There are 9-year-old Gypsy kids, slamming out solos — a lot of young prodigies. It’s very valued in the music to be young. I’m already considered too old to be ‘young,’ so I have to be ‘good’!” Labriola notes. Happenstance played a part in all of this. Labriola found herself first intrigued by the form when she watched the Woody Allen movie Midnight in Paris, her interest sparked in particular by the theme song. Soon thereafter, Gypsy Jazz guitarist — and composer of that song — Stephane Wrembel appeared in Beacon at the Towne Crier, and Labriola attended. “He put on an amazing show, and I just decided to ask him if he taught. He answered ‘If you’re a serious student, I’ll take you on.’ He meant it. French-born, Wrembel is based in Maplewood, New Jersey, and I started going there every Saturday. First my parents brought me and now I drive there. My parents were thrilled — my dad was really pleased that I was learning jazz theory. At first I knew nothing, no technique, no major songs. I had done a lot of picking work, playing classical and had to switch to using my fingers.”

Gypsy Jazz requires a lot from its players, according to Labriola. “There’s an immense amount of skill that goes into it; you really have to put your hours in. It’s not going to sound great unless you have the technique in both improvisation and rhythm. You have to keep perfect time. I’m only now realizing the importance, now that I’m playing long gigs — it’s like running a marathon. It’s not always about playing super fast. Take [renowned Gypsy Jazz guitarist] Django Reinhardt — he doesn’t play incredibly fast, he plays differently to how Gypsy is played now — his riffs are so poetic and beautiful, he has such grace in every note when he solos. He understands sound; he could hear so well and that is so important.”

Still studying with Wrembel, Labriola has begun performing with him as well, “learning while playing,” she says. “I didn’t play with him much before last year. I studied with him and sat in at Towne Crier, but when he understood I wanted to become a professional he started inviting me to sit in on his city gigs.” Now, while finishing up high school at Haldane, she has been doing some major juggling, often traveling into the city a few nights most weeks for gigs, sometimes even playing multiple gigs on a night. 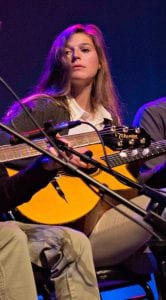 Sara Labriola performing in 2015 at the Django Festival at the Paramount Hudson Valley. (Photo by Mickey Deneher)

It’s all a precursor to the next stage of her life, as a nascent professional musician. With imminent plans to move into a Brooklyn apartment and begin playing and touring, Labriola is foregoing college, perhaps permanently, despite being accepted at Boston’s Berklee College of Music with a talent scholarship. The decision, while it involved a lot of thought, ultimately came easily. “At the beginning of senior year I wanted to go to music school so badly, because I was scared of going into the world. But when I was touring schools I found none had all I wanted. I don’t want to go to another institution where I’m inundated with things I don’t necessarily want not to learn, but I don’t want to be tied down. I just want to practice and play Gypsy Jazz    all the time. Schools teach standard jazz, and I’m not going to get professional help unless I’m studying with my teacher. He didn’t want me to go to school.” As a safety net of sorts, but one she doesn’t really see using, she has deferred her admission to Berklee for a year. Labriola’s parents have endorsed this decision. “My parents are so supportive of going out into the world. At first maybe we were all thinking college as a social norm, but I’m so relieved that I decided not to go.”

Amping up the number of dates she is playing has already been a big change for Labriola, not just the playing itself. “It takes a lot of growing up to do this. Last night I drove into Brooklyn, helped someone move out of the apartment I’ll be moving into, went further downtown for a 3-hour gig, then went back up to Williamsburg for another 1-hour gig, then drove home. It involves a lot of willpower and a lot of coffee; it’s a test of endurance.”

Labriola can expect a lot more of the same in the near future. She’s spending some time over the summer recording demo songs. Meanwhile, Wrembel’s agent is currently trying to work out a touring group including Labriola, with the aim of booking shows up and down the East Coast and at festivals.

From time to time, Labriola duets with her father, Art, on piano. They play American jazz standards, and some Gypsy Jazz too — not a natural fit for him. “He has to work hard to play my rhythms. It’s a lot of fun, though. We don’t get that many opportunities. I love playing with him, because I’m not self-conscious. He gives me truthful feedback, but it’s never judgmental.” One such opportunity will come this Sunday, June 19, at the Towne Crier Café in Beacon, where it all began for Labriola, playing a Father’s Day brunch from 11:30 a.m. to 2:30 p.m., no cover charge.

Labriola is as ready as one can be at 17. As she puts it, “I really want to succeed more than anyone else wants me to succeed. Now I’m truly taking steps to succeed in what I want to do.”