The Beacon City Council will likely discuss the potential rezoning of seven parcels within the city’s west side linkage zone next month before holding another public hearing on the issue.

A petition filed by residents in February contends that seven parcels — two on South Avenue and five on Wolcott Avenue/Route 9D — were incorrectly included in Beacon’s linkage zone, which was adopted three years ago to connect Main Street to the Hudson River by encouraging more dense residential growth. The city’s idea was that added development along Beacon’s west side would create a more vibrant, walkable community and increase support for businesses on Main Street.

At a workshop on June 13, the council asked city planner David Stolman to map out a handful of scenarios for rezoning the seven lots. Among the possibilities are medium-density rezonings for the site known as Parcel L (the three lots immediately south of the Reformed Church of Beacon on Route 9D). One option would allow 21 units to be built on Parcel L; another would allow for up to 24.

Unicorn Contracting, however, has proposed a 70-plus-unit development called the River Highlands for the parcels. While the planning board has not approved the Highlands development, the owner of the parcel has threatened litigation (and intimated that Unicorn may sue as well) to recoup expenses if the lots are rezoned.

City Administrator Anthony Ruggiero said Tuesday that it’s possible the seven parcels may not all be rezoned the same way. One proposal, for instance, shows the two lots adjacent to St. Andrew’s Episcopal Church on South Avenue going to medium density — but not the same level of “medium density” as Parcel L.

The remaining two lots — the Reformed Church property on 9D and 1085 Wolcott Avenue, just south of the church on 9D — are proposed to be zoned for low density, Ruggiero said.

The Beacon planning board voted in April to support the citizens’ petition, agreeing that the parcels’ current zoning conflicts with the city’s comprehensive plan. The petition asks for all seven properties to revert to their pre-linkage zoning. The City Council’s next discussion of the issue could be at its July 11 workshop, Ruggiero said.

The 100-unit 248 Tioronda complex — a project nine years in the making — is expected to receive an extension, with another possibly to come, on its special permit approval as its developers continue negotiating for an easement on the property with Metro-North.

Jennifer Van Tuyl appeared before the City Council on behalf of Beacon 248, LLP on June 13 to request an 18-month extension, citing unexpected delays in negotiations for the easement on the Metro-North-owned railroad tracks along Fishkill Creek. The project, which is planned for nine-plus acres along Tioronda Avenue between the creek and the railroad, was granted a six-month extension earlier this year. 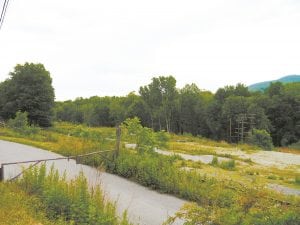 The site of the Tioranda development (Photo by J. Simms)

“[Another] six-month extension for a project this large is just not really workable. It has been very difficult to obtain financing” when the threat of revocation looms just a few months ahead, Van Tuyl told the council.

An 18-month extension would be the last one requested by Beacon 248, she added.

The council verbally agreed to grant a six-month extension that would be followed by another 12-month extension, provided that Beacon 248 resolves its issues with Metro-North during the first six-month period. Council members are expected to vote on the proposal during their next regular meeting.

“I want to see it get done,” Councilperson Ali Muhammad commented. “This needs to happen for Beacon. People need to live somewhere.”

The project is designed to include 100 two-bedroom units within four buildings as well as a 1,200-square-foot clubhouse and a pool for its residents, along with roads and parking areas. The developer has also committed to creating a publicly accessible greenway trail, with parking along Fishkill Creek.

While the City Council has yet to vote on a budget amendment to officially approve a trial run for a new afterschool program managed by the city’s Recreation Department, city administrator Ruggiero indicated the proposal is moving forward.

The program is slated to begin a 17-week test run in September at the South Avenue, J.V. Forrestal and Sargent elementary schools. It will run weekdays from 3:15 until 6 p.m. at a cost of around $13 per day to participants. The city would fund the program with a budget amendment of about $105,000, although organizers expect the program will pay for itself almost immediately upon its launch.

Ruggiero told The Current he expects the City Council to vote on the program in an upcoming public meeting.