It’s an hour before service begins at The Beacon Bite, traditionally the most hectic time of the day for a restaurant, when employees are running around in a panic and maybe a plate or two is getting thrown. But the staff here is a model of calm and calculated efficiency, despite the fact that there’s only two of them, and despite the fact that their kitchen is a cramped firetruck red trailer in the middle of the lot at the corner of Main and Schenck.

Right now there’s only one of them inside, chef Josh Venne, who’s serenely sautéing half a dozen aromatics to make the concentrated flavored liquid known in Japanese cooking as tare while simultaneously preparing a batter to fry bananas for an Indonesian-inspired dish and rigging together a simmering pot stuffed with eggs and thermometers into a contraption he refers to as a “ghetto sous vide.” Venne’s business partner, Dalton Edwards, who he met when the two were both students at the Culinary Institute of America in Hyde Park, is behind the trailer and dealing with the comparatively easy task of dropping a new 250-gallon wastewater tank into a freshly dug pit. 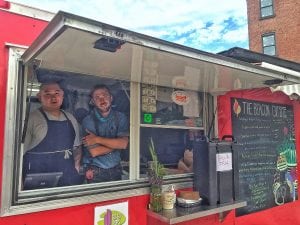 Josh Venne and Dalton Edwards of The Beacon Bite. (Photo by B. Cronin)

“I used to just haul away all of our wastewater, trash, recyclables and compostables,” Edwards explains. “But I don’t think my back can take it anymore.”

Since the two men opened the Beacon Bite three years ago, they’ve been helping to push Beacon’s culture forward one plate at a time, challenging both outdated laws and closed mindsets. Along the way, they’ve found themselves answering the same questions over and over again.

For starters: Yes, they’re allowed to do this.

“I think people don’t know that I own this land, we don’t rent it from the city,” said Edwards. “So when people see me out here making these infrastructure improvements,” sweeping his hands to indicate the wastewater tank, the compost pit, the vegetable garden that Common Ground Farm is helping him establish, the picnic tables, the outdoor sculptures, the strings of lights dangling overhead, “They say to me ‘Do you have permission to do that?’ And I tell them ‘Well, I would certainly hope so. Because if not me, then who?’ ”

When Edwards bought the land three years ago, he and Venne dreamed of building a dine-in movie theater with table service, waiters, beer, wine, the works. They’d run it for 10 years and then flip the building to a developer, making their money back threefold. 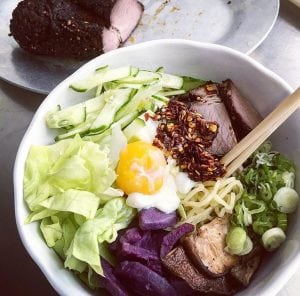 The two men decided the market wasn’t right for an upscale theater, but it felt it was overdue for the kind of funky food truck culture that has been a mainstay in Austin, Portland, Washington D.C., and other cultural hotspots outside of the northeast for years. Edwards himself is from Austin, and he recognized in Beacon a lot of what made his hometown so special — as well as what destroyed it.

“When I was growing up, Austin was a sleepy little college town with hippies and a mayor who played hacky sack,” he says. “Then the developers found it. I go back there to visit, but the soul of the place is extinguished. It’s now just Diet Los Angeles. I lived through that, and it feels like I’m starting to live through that again here.”

There’s a painting on the lot that Edwards had commissioned to inspire himself and others to not let what happened in Austin happen to Beacon. “Keep Beacon Weird” it proclaims, an homage to both Austin’s famous “Keep Austin Weird” slogan and the work of one of Austin’s most famous outsider artists, Daniel Johnston.

“People ask me, ‘How weird do you want Beacon to be?’ ” says Edwards. “And I say ‘I don’t know, how many condos are you going to build around me? Because the more condos you build, the weirder I’m going to get.’ ”

But there’s a difference between weird and unwelcoming, and the Beacon Bite is anything but unwelcoming.

“I know people can get intimidated by the long lists of ingredients on the menu, but I’m not snobby,” says Venne as a classic Tribe Called Quest track booms out from the trailer’s speakers. “I’m more than happy to explain anything to anyone.” 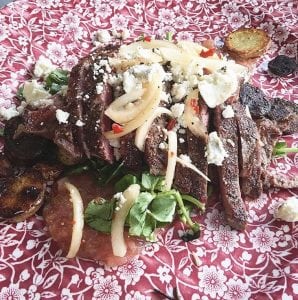 Which leads to the second question they get asked over and over again: Please don’t ask for a hot dog.

“It sounds silly, but it’s so annoying,” says Venne. “I like hot dogs too, but we’ve got Frank down the street selling hot dogs,” he says, referring to the ubiquitous hot dog cart in front of the post office. “Why would I want to compete with Frank?”

The Beacon Bite’s menu changes every week depending on what’s in season, what Venne can get his hands on, what the weather is going to be, and what his ever-changing whims are. The dishes are mainly inspired by his own globetrotting culinary adventures. After the Bite’s annual six-month season closes, and after he spends a few weeks cooking for the special-needs Camp Jabberwocky in Massachusetts, Venne buys a whole bunch of cheap one-way plane tickets, flies out to the other side of the world, and spends the next five months eating his way home in the name of research.

“I’m basically just looking to try as many local things as I can possibly find,” he says. “That means risking my health a lot, but it also means I’m eating pretty cheaply.”

For the last three years Venne has been eating his way around Southeast Asia and Australia, which in turn inspired such dishes as the mashed sweet potato and yuca cakes topped with shredded coconut, chiles, limes, and a black tea reduction that came from his time in Sri Lanka. Or the scallion flatbread pork wraps, a mashup of Chinese scallion pancakes and Korean barbecue by way of Los Angeles. Or his riff on Malaysian fried chicken, in which chicken thighs are marinated in a paste of chilies cut with fermented anchovies and shrimp heads.

“You don’t taste anything fishy,” explains Venne. “It just has this pleasant, underlying salty taste that’s really appealing but you can’t figure out where it’s coming from.”

This year when the Bite closes up in the fall, he’s headed south to reacquaint himself with South American and Central American street food, brush up his Spanish with regional dialects and slang terms, and work his way up to Texas before returning to the Hudson Highlands. But in the meantime there’s another season just beginning, more menus to whip up on the fly in a kitchen the size of a pantry with a sink the size of a lunch tray, more minds to expand, and more prejudices to take down as Venne and Edwards work to show the Highlands that sometimes the most inventive and innovative restaurant in town can be the one with wheels on it. It’s not easy.

“Well, if it was easy, everyone would be doing this,” Edwards says.