Or is there no mystery at all?

Compelling archaeological mysteries can spark centuries or even millennia of conjecture. And while they may be passionate, arguments often fail to produce definitive answers. What lies behind the building of the Egyptian and Mayan pyramids? How can the giant moai statues on Easter Island be explained? How and why was Stonehenge created?

Add to that list a more local and perhaps equally intriguing question: what is the true origin and purpose of Putnam County’s stone chambers? Some feel they are as mysterious as Stonehenge. Others believe there is no mystery at all. The debate is centuries old, but, like its more famous counterparts in history, this is a continuing disagreement. 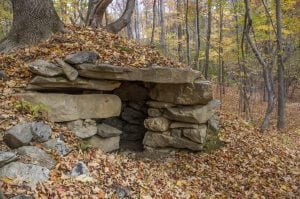 The most common theory is that the chambers, which are often built into hillsides and feature a massive entrance, are root cellars constructed by colonial farmers who first settled in the region. Others strongly believe the structures had a religious or ceremonial purpose and are much older — constructed during pre-Columbian times by Celts, Vikings, Iberians, Carthaginians or Native Americans, or some combination.

The one area of agreement is that the chambers are man-made and that the greatest number of them, up to 200, are in Putnam County. Within Putnam they are most common in Kent, Putnam Valley and Mahopac. Few are found in Philipstown. They are also located in Westchester County and parts of Connecticut, New Hampshire and Vermont.

Some stone chambers are quite small but others are more than 30 feet long and up to 10 feet wide. Their stone walls were built without mortar and are typically “corbelled,” or curved inward toward ceilings that can exceed six feet in height and often consist of large granite slabs.

The case for cellars

In an article in The New York Times in 2001, Robert Funk, former chief archaeologist for the New York State Museum, said the chambers have never been seriously studied “because nobody has ever produced any evidence of anything but colonial origin.” He debunked the notion that they were built by visitors from the other side of the Atlantic. “There are no Celtic ruins in the New World and certainly not in Putnam County. It’s a romantic idea and people want to believe … almost like a religion.” 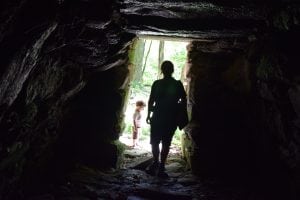 Inside the Winter Solstice chamber in Kent (Photo by M. Turton)

A decade earlier, in an extensive 1990 article on Putnam Valley’s chambers published in the Hudson Valley Regional Review, Thaddeus Cook and Barbara Doyle took the same view, arguing that the colonial root cellar hypothesis “has been confirmed through oral traditions many times both in Putnam County and New England.”

Questions raised – even in the 17th century

However, in a recent presentation at the Putnam Valley Grange, Renee Fleury pointed to evidence that at least raises questions about the chambers’ origins. Fleury founded Keltic Energy Paranormal Research and Investigation (KEPRI) in 2007 and has studied and led tours to the chambers ever since. She quoted a 1654 letter written by John Pynchon, founder of Springfield, Mass., in which he wrote of a “report of a stone wall and a strong chamber … all made of stone … I should be glad to know the truth of it from your self … here being many strange reports about it.”

The letter suggests that as early as the 17th century there was uncertainty about the chambers. Had the structure mentioned in Pynchon’s letter simply been a root cellar, it is unlikely to have fostered “strange reports.”

And while Cook and Doyle wrote that “there are several compelling reasons to support the colonial origin theory,” they too refer to Pynchon’s letter, stating that it “leads us to believe there were enigmatic pre-colonial stone chambers.” They noted that an excavation of two Massachusetts chambers similar to those in Putnam Valley unearthed Native American stone tools. The lack of pottery fragments at the site or other evidence of habitation implies that the chambers were likely used for religious or ceremonial purposes, they wrote. It has also been suggested that some chambers served as burial sites.

Fleury and other sources assert that some chambers bear markings that resemble Ogham, an ancient Celtic alphabet used between the fourth and 10th centuries. A number of chambers are also aligned with solar events such as the solstice, fueling speculation that they were used for celestial observation, a use consistent with Celtic or Native American traditions.

An incident in 1995 teased a connection between stone chambers and pre-Columbian visitors to North America. According to Fleury, an eight-inch obsidian blade was pulled from the walls of the King’s Chamber in Putnam Valley. “The dagger was lab tested and dated at roughly 2,000 years,” she said. “The obsidian was Icelandic.” Unfortunately, she said, the artifact disappeared when sent for further testing. 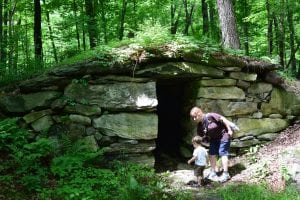 Renee Fleury and her son Dante at the Winter Solstice chamber. (Photo by M. Turton)

Garrison resident Chip Marks has visited and studied more than two dozen stone chambers in Putnam County as well as in Connecticut and west of the Hudson River. He has also studied Egypt’s ancient structures firsthand. “People have been moving immense weights and usually aligning them astronomically” for centuries, he said. “It’s worldwide. I was intrigued by Stonehenge — then come to find they’re all over the place right here. You don’t have to buy a plane ticket. They’re here locally.”

Marks’ opinion regarding Putnam’s stone chambers is not ambiguous. “They’re not root cellars,” he said. “Not by any stretch of the imagination.” While buildings erected by settlers and colonists had straight walls, chamber walls are corbelled “like igloos,” he said. He believes the huge stones used in their construction and the arduous work involved points away from the chambers being built as root cellars.

“If you were a settler … you’re carving a homestead out of the forest. You’re going to put your effort into building a house and a barn — not a root cellar that required the movement of massive pieces of rock,” Marks said. “And most roots cellars would have been in the house.” He also wondered why a colonial farmer would bother aligning a chamber with the solstice.

He acknowledges that chambers likely served as root cellars — but at a later date. “If a settler came across a stone chamber on his property, why wouldn’t he put it to good use? It’s a gift,” Marks reasoned. He also emphasized that the chambers’ construction did not include a door but that they were added later for adaptive reuse, just as mortar was sometimes added.

Like others, Marks said he believes the chambers were used for spiritual purposes.

The New England Antiquities Research Association (NEARA) was established in 1964 to promote “disciplined research” on the origin and function of lithic structures such as Putnam County’s stone chambers. Polly Midgley, NEARA’s representative in New York state, echoed the organization’s open-minded approach. “The persistence of … distinctive style chambers as well as chambers that mark the sun’s calendar positions, and sometimes those of the moon, are noteworthy,“ she wrote in an email to The Current. “NEARA has interest in all possible chamber beginnings that range from the influences of very early arrivals in North America to the Native Americans to early local farmers.  However, preservation is paramount.” 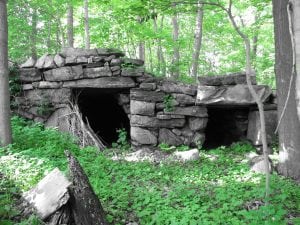 These twin chambers  are located near Oscawana Lake in Putnam Valley. (Photo by Renee Fleury)

Putnam Valley Supervisor Sam Oliverio is passionate about preserving the chambers. “They were not just root cellars,” he said. “Absolutely they should be protected.” Several years ago he tried to do that as a member of the Putnam County Legislature but failed to garner enough support from fellow legislators. He is now helping to draft a local law to conserve the structures in Putnam Valley. “The double chamber is one of many in the town,” he said. “It is exceedingly rare. It’s mind-boggling.”

Fleury doesn’t lean totally toward any single hypothesis about the original use of the chambers. “Some probably were root cellars” she said, while leaving room in her mind for other explanations as well. “The best thing about them is that they remain a mystery.”

Perhaps some questions will be answered this fall. Linda Zimmermann, author of Mysterious Stone Sites in the Hudson Valley and Northern New Jersey, published in April, is scheduled to speak at the Butterfield Library in Cold Spring on Oct. 8.