If Philipstown wants to preserve its unpaved roads, it has to look at higher quality but more expensive road materials and plan for the long term, according to an expert in dirt-road construction and preservation who spoke to the Philipstown Town Board on June 15.

Ken Skorseth, a retired South Dakota State University road teacher and consultant, addressed the board and an audience of a few dozen residents. His presentation came three months after the self-confessed dirt road fan first visited Philipstown, taking a tour of the roads and the Highway Department facility and collecting samples of gravel for shipment back to a South Dakota laboratory.

The engineer completed his study at the request of the Garrison-based Old Road Society, headed by Terry Zaleski, which has long championed the preservation of the area’s unpaved roads, citing their historical significance.

Skorseth’s central point, resulting from the testing of samples, was that Philipstown’s dirt roads lack “plasticity,” meaning the materials used lack the capability for strong binding needed to hold the road in place. He said testing revealed zero plasticity. Skorseth said good plasticity means you can pick up the material and easily roll it into a ball. 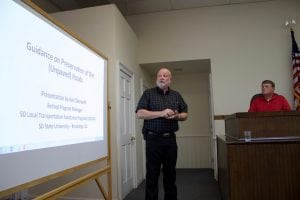 Ken Skorseth presents his findings to the Philipstown Town Board on June 15 (photo by K.E. Foley)

He said he was sympathetic to the problems of obtaining good road materials from regional commercial suppliers that would rather sell materials that require regular replacement. Skorseth said there are suppliers further away who could create and deliver materials that would last considerably longer and require less maintenance.

Skorseth suggested possible solutions such as the limited use of bentonite, a substance derived from clay that acts as a binding agent. Bentonite is used in numerous products and industrial processes including cosmetics, cat litter and the making of white wine.

Philipstown’s dirt roads are generally in good condition, Skorseth said, although he noted that some do not have a proper crown, meaning the height at the center is higher than the sides, allowing for water run-off, a critical factor in preserving roads. He also stressed that effective drainage systems are needed. He showed pictures of various roads he had worked on and the systems installed. He noted that Philipstown had some drains right on the road, making them vulnerable to damage by passing vehicles.

In years past some Philipstown roads have suffered extensive water damage, particularly during strong storms, which has led to sometimes heated debate about paving them. The Town Board has authorized paving on some roads after repeated damage from storms. “There are drainage problems on paved roads, too,” said Skorseth.

He said he thought the town Highway Department, headed by Superintendent Carl Frisenda since his election in November 2015, had the right equipment for the job and seemed to have sound maintenance and repair practices.

The consultant said he had developed a spreadsheet that could predict expenses for road maintenance over a longer-term cycle, which he said would helpful in budget planning and the recognition of savings.

Skorseth, who is the author of a federal Department of Transportation manual on unpaved roads, is expected to deliver a final written report on his findings.

The Town Board members listened attentively to the highly detailed report. Supervisor Richard Shea thanked Skorseth and said he looked forward to further discussion. Deputy Supervisor Nancy Montgomery said that Skorseth’s observations validated the path that Frisenda is on in his administration of the Highway Department.

For his part, Zaleski was ebullient over the event. “We are very excited we have the No. 1 expert in the U.S. here to talk about his solutions for maintaining our dirt roads,” he said. “He has made good, realistic, practical, tested and cost-effective recommendations.”