The nine-spotted ladybug, Coccinella novemnotata, is New York’s state insect. It’s revered because of its usefulness in controlling pests on crops. It hadn’t been seen in the eastern U.S. since 1992, though, until one was spotted in 2006. It’s become very rare, to say the least.

The Lost Ladybug Project at Cornell University has been tracking it, searching with teams of volunteers throughout North America for the past eight years. Their citizen science-based research, which had more than 5,000 participants and has identified 37,000 ladybugs, concluded that the nine-spotted variety is mostly absent. 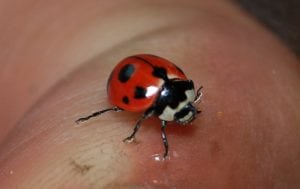 This spring it launched a reintroduction plan that starts in New York; larvae are available to anyone for a donation. (Visit lostladybug.org for information.) Rebecca Smyth, one of the entomologists and researchers from the Lost Ladybug Project, explained the project and the search.

Why has this been going on so long?

When you’re looking for the absence of something, you have to take longer to make sure you’ve looked hard enough and you have to look extra hard. With citizen science, you’re not in good control of the data and we were passively waiting for people to send us their info.

Why is New York the focus of the reintroduction effort?

The nine-spotted ladybug was abundant here before it declined and while we would love to get it beyond New York, we don’t have that kind of production yet. This meant we could work locally and focus our efforts.

Why are native ladybug populations dwindling?

There are many causes. The separate introduction of two large and invasive ladybugs — the multicolored Asian ladybug and the seven-spotted ladybug which came from Europe — to address pest problems had a lot to do with it. They both grow faster and eat more. It also could be relevant that they develop faster and can eat the larva of the native ladybug. Even though we can’t get rid of introduced ladybugs, neither population seems to be growing. Pesticides and less diverse landscapes also had an impact.

Why are they called beneficial insects?

They eat anything smaller than themselves and soft-bodied, which includes larvae early in the year and mostly aphids later in the year. Aphids are in clusters and it’s a great food source. There are many different kinds of aphids and they can harm many different kinds of plants. Aphids suck the juice out of a plant and affect crops and flowers, bushes and trees. They’re all over the place and not good for plants.

If the effort is successful, how will it be measured? Will people who buy ladybugs be asked to track their populations?

We are continuing the citizen-science part of the project and hope that people will start to see them. This can take a long time. The two species that were introduced 40 years ago and are the dominant species were not seen in significant numbers in 1985, when the most recent comprehensive book was published. It defined each species and concluded that attempts at introduction had failed. Now, 30 years later, they’re the dominant species. It can take a while to figure out. We won’t really know if this works for 20 years.

If I release 50 in my own yard, will they be there next year? Will they multiply?

It depends on how big the yard is; they move around a lot. If someone has a diverse yard with different kinds of plants that have aphids, then there’s a better chance. They eat fast and need to find more food. If you don’t see them quickly, though, it doesn’t mean it failed. They should multiply.

What is a good habitat? For example, I live in the woods, have landscaped my yard with native plants and pollinator-friendly plants, but it’s still surrounded by a sugar maple forest.

The key is some flowering plants that have different kinds of prey and that will give them a variety of foods. There’s action in the woods, but we don’t know as much about it. Mostly people study agricultural landscapes.

That would be great, as long as it doesn’t use pesticides. The only problem is that people are so attentive to their plots; they might go around squishing all the bugs.

How many ladybugs could my community garden support?

The more the better in terms of surviving. You could easily have 50 for every four plots.

In the winter, I have ladybugs inside the house. Two seasons ago, there were at least three times more than this past winter. Is that significant?

Given the data we’re receiving, it’s what we would expect. The Asian ladybug is the only one you’re going to find in your home. What we expect from a species that’s invading is that for a while it does great and then eventually it starts to die back and then they find their spot in the group. But even after it’s kind of declined, the Asian ladybug is still dominant and that’s happening all over the world.  From a conservation standpoint, that’s a disaster.