“This is it, definitely my last restaurant.”

So says restaurateur Kamel Jamal of Ziatün, his fifth and final child (for now, at least) and the establishment that hits closest to home, its Middle Eastern/Arabic/Palestinian (as it is billed) cuisine a replication of the home cooking he grew up on as the child of Palestinian immigrants. This place is special, because I have my wife and my sisters involved, too. The kitchen isn’t ‘my’ kitchen, it’s ‘ours.’ “

Born in in a refugee camp in Jordan, Jamal’s family first moved, through a sponsored visa, to upper Manhattan, then continued north to Yonkers, eventually settling in Yorktown, where he grew up. Jamal has been hankering to serve the type of Middle Eastern home cooking he grew up on, and, finally, after stops at other ethnic cuisines along the way, he has the opportunity with Ziatün, pronounced “Zay-toon,” which means “olive” in Arabic, his third current establishment in Beacon.

Olive was chosen symbolically, as “the olive oil is the pride of so many countries, and the best is like a fine wine, and it’s probably one of the most used ingredients on our menu. Also the olive branch means peace, and unfortunately we’re living in a time of ‘not peace;’ having an Arabic restaurant touches people in different ways,” Jamal explains. 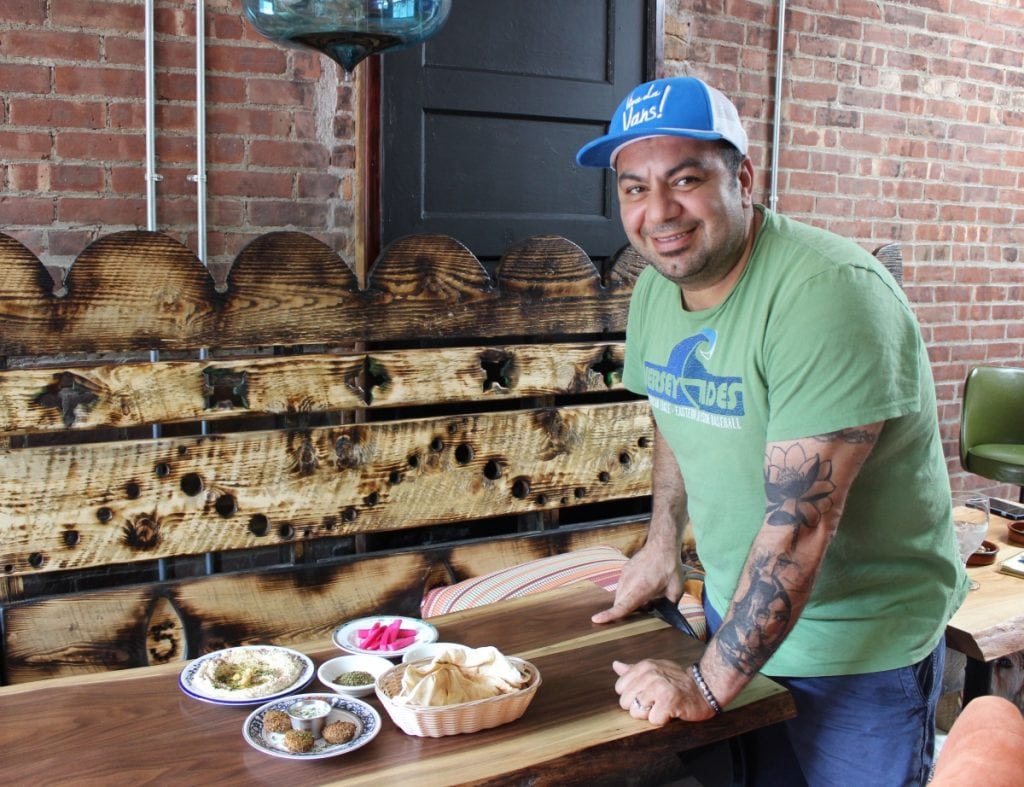 Ziatün is Kamel Jamal’s fourth restaurant, and the first to serve food reflecting his own heritage.  Photo by A. Rooney

That menu focuses on middle eastern foods familiar to many: shawarnas, kebabs (all the meat served is Halal), hummous, falafel, tabouleh, baba ghanouj and other staples. Less familiar is mujaddara, brown lentils with rice and caramelized onions. Rosewater lemonade and Moroccan iced tea take care of the liquid side of things. “The menu is my mother’s way of cooking. She taught my six sisters how to cook. It’s food that we learned to love, food that we were fed when we came home from school. My mother’s hand is in all of this, especially the way she puts spices together,” Jamal recalls.

Very little is specific just to Jordanian or to Palestinian cuisine, in fact Jamal has relied on several cookbooks in devising and fine-tuning recipes other than those of his mother’s. “We’re going to have a signature dish for each week, and we will tell the story about it,” says Jamal. Accompanying the entrees are side dishes, ranging from pickled turnips to zataar, a delicious blend of oregano, thyme and sesame. 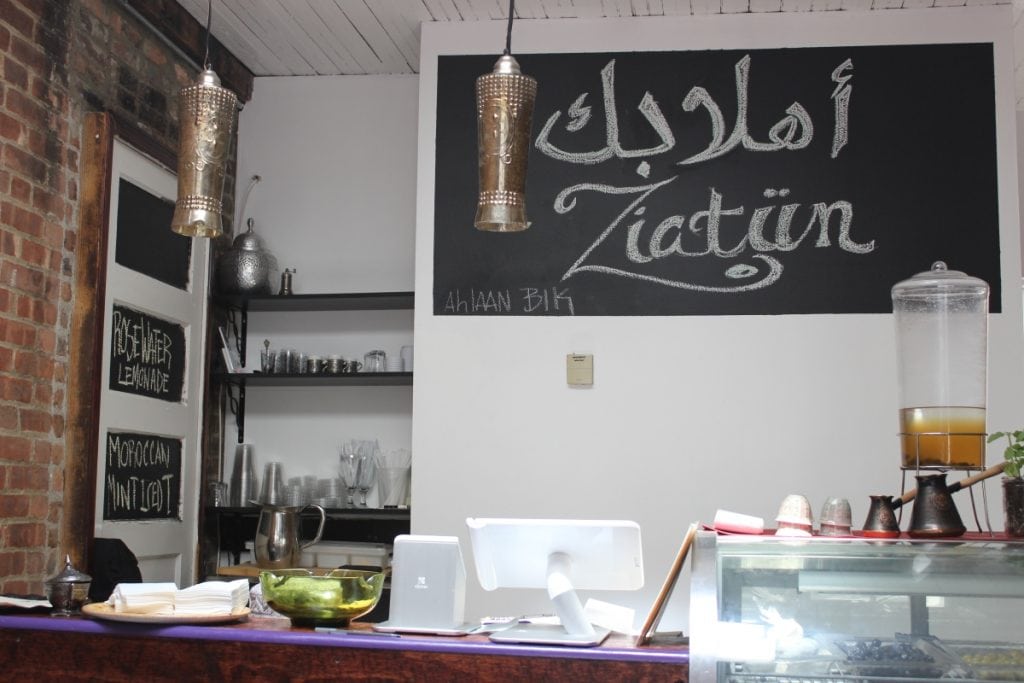 A welcome sign for Ziatün, which means ”olive” in Arabic.  Photo by A. Rooney

It was a February trip to Jordan that spurred Jamal on to open this kind of restaurant. “I knew I wanted to do Middle Eastern. I had already started infusing it into my other restaurants, for instance trying out falafel at Tito Santana’s, more or less test marketing it. Then, my wife and I were walking down Main Street when I got back and someone came up to us and told us that the person running Gerardo’s Seafood [the former tenant of Ziatün’s space] wanted to give it up. So I decided to do this now. We got it open in two months.”

During those months, along with menu development, the interior was re-designed. The staff are all local — “I’m employing seven people from the community,” Jamal says proudly. Describing Beacon as a “food destination,” Jamal notes there will soon be 41 restaurants just on Main Street alone. He feels that he jumped in at the right time, first with Tito Santana, five years ago, and then Beacon Bread Company, a few years later. 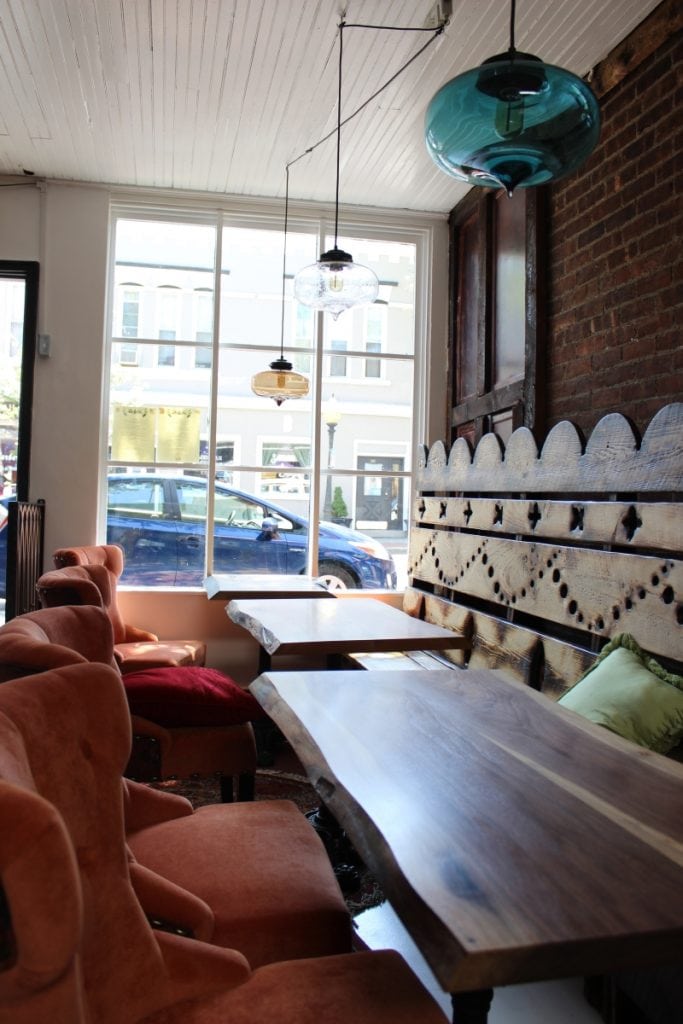 A long bench, specially carved for Ziatün, forms the literal backbone of the interior decor.  Photo by A. Rooney

After cutting his teeth early on, owning and operating a deli while still in his teens, Jamal’s first big project came with his takeover of Cold Spring’s Angelina’s, “bringing it up” as he says, as both a pizzeria and an Italian restaurant. He didn’t want to do another pizzeria in Beacon — that market was saturated, and instead began “reading what was trending, which then was tacos. So we caught the wave.”

His intent with Beacon Bread was to create something that wouldn’t compete with other local restaurants, but would instead complement them. Hence a breakfast and lunch place with breads good enough that they could be exported to other establishments.

As of now, Ziatün is open Thursday through Monday, from 11 a.m. until 9 p.m. and until 10 p.m. on Friday and Saturday. Everything is available for take-out, as well as dining in. But it won’t truly be opened, as far as Jamal is concerned, until his mother, Kawzieh, comes to dine. She hasn’t been well in recent years, but is on the mend. “She is finally able to walk again. I’m not going to consider this opened until she comes in and sits down.”

3 thoughts on “Ziatün Makes its Debut”