Sitting in Jennifer Zwarich and John Wayland’s backyard amidst a collection of hand-painted signs for movies to be screened in Dockside Park, one can be forgiven for momentarily channeling Mickey Rooney and Judy Garland plotting to put on a show to save the community from ruin.

Although surely different from the Hollywood duo of yore, the Cold Spring pair, and some other buddies to be named later, began their Film Society, now starting its sixth season, with the same communal impulse and let’s-put-on-a-show eagerness.

“The first season, we thought we would get maybe 30 to 40 people, just some friends and film lovers” said Zwarich. Instead, the local premiere of The Princess Bride drew a pop-up crowd of 600. “It was thrilling and really unexpected,” she said.

Wayland and Zwarich recounted how they worked with borrowed, suddenly inadequate-for-a-large-crowd equipment — an old projector from the Depot Theatre, and even older speakers from former village trustee Bruce Campbell. The screen was fashioned together with pipes. The audience didn’t seem to mind. They called for more. Planning to only to show three films that summer, they added a fourth to popular acclaim. 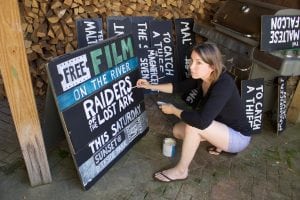 In an era of large home screens, Internet streaming, films displayed on any device you like or theaters with elaborate sound systems, the giant homemade outdoor screen experience seems very yesterday. But people are drawn to the riverside for the show. Last season saw the audience for a double feature of Top Gun and Robin Hood grew to more than 1,000.

“It’s a beautiful space. When you’re down there for sunset, having a picnic, the kids running around, it’s great,” said Wayland when asked to dwell on the appeal of the screenings. Added Zwarich: “It’s a very in clusive experience; we all love the homemade, chill nature of our screenings and the way that locals and visitors, young and old, dogs and babies, smokers and cell phone addicts all manage to share a lawn and enjoy a few hours together relaxing on the riverfront.”

The motive for starting the society came from love of film and wanting “to do something good for the community,” said Zwarich, who has also helped spearhead the effort to nurture and protect Cold Spring’s trees.

They are also card-carrying professionals in the film world. Wayland works as a film and video editor and Zwarich holds a Ph.D. in cinema studies from NYU. Along with co-founders Stephanie Hawkins, Paul Henderson, Beth Sigler, John Plummer and Dave McCarthy, community activists all, they try to select a mix of old films from blockbusters to classics that will appeal to a broad range of tastes over the season.

Wanting to try to keep operations relatively simple and at the same time serve a growing audience is the great challenge for the organizers of CSFS. This year they will introduce the third bigger and better movie screen. The screen itself was purchased from a company in the Midwest. Paul Henderson, an architect, led an effort to design a made-in-Philipstown structure involving 80 pipes and some elbow joints. Bungee chords also help secure the screen to the earth.

Wayland explained the larger screen (twice the surface area of the previous one) allows for improved-quality viewing by accounting for the different formats movies were filmed in over the decades. The screen was tested in early June and pronounced ready for action. A better used projector was only acquired to accommodate the screen. 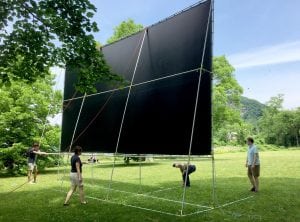 “People always say have a bigger screen. I think we’ve maxed out on screen size for a while,” said Zwarich.

The screen takes about an hour to set up each time. The whole cinema kit and caboodle conveniently fits into Wayland and Zwarich’s minivan. “Except for the popcorn machine,” said Wayland. Taking everything down and packing it takes longer because it’s dark and everyone is tired.

CSFS benefits from the local volunteer talent pool. Helping to avoid volunteer burn-out, CSFS is also able to pay stipends to a few summer interns recruited from Haldane’s ranks. Last fall, Haldane invited CSFS to do an outdoor screening of Ferris Bueller’s Day Off on the school football field in part as an effort to attract teenagers to the summer screenings. While the afternoon was a success, the ultimate goal is likely a work in progress.

“It is actually a deceptively large number of hours all of our volunteers donate to make this happen, but when people come out to the park and sit down together and gasp and laugh and applaud and donate a few bucks and then pick up all their trash before they leave — it very much keeps the wind at our backs,” said Zwarich.

Not wanting to have admission a barrier for any families to enjoy the evenings CSFS works to raise money through local sponsors and requests for donations at the events. The cost of upgrading the equipment and staging the screenings, including licensing fees of a few hundred dollars per film amount to about $8,000 to $9,000 a year.

Steven Spielberg’s (he has had a film every season) Raiders of the Lost Ark is up Saturday, June 25. See the full summer schedule at coldspringfilm.org.