The Beacon City School District is in some ways a tale of two cities. The meeting of the Board of Education on June 20 began with an upbeat ceremony extolling the virtues of teachers retiring and the new generation receiving tenure. But that same meeting — nearly five hours later — ended awash in protest.

Midway through the meeting, — after the board took almost an hour in executive session to discuss a personnel matter — the fault lines emerged between parents and teachers, the administration and, most especially, the elected board of education.

During the public comment period, a number of residents presented issues and criticisms from a policy and personal perspective. Questions were raised on the retention and assignment of teachers, on the handling of individual personnel matters, the ethics of the board’s lawyer, the appointment of new administrators and one unnamed board member’s allegedly harsh criticism of the baseball program for failure to give an award to a son.

At the midnight hour

But it wasn’t until 11:30 p.m. that the meeting displayed most vividly the tensions and distrust that have thwarted efforts to move forward on reform and hire a superintendent willing and able to sustain the support and cooperation of the board and the district’s stakeholders.

Board member Anthony White had earlier noted the absence of member Jose Munoz and queried board president Melissa Thompson as to what she knew. Thompson acknowledged that Munoz had earlier in the day sent her an email offering his resignation, effective immediately. Munoz has had a poor attendance record, apparently due to family issues.

In response, vice president William Zopf suggested the board had three options: do nothing, hold a special election (which would be expensive and take time) or make an appointment, which could include soliciting applications for the position. 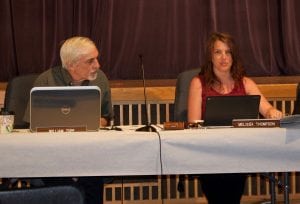 Zopf then moved that the board fill the vacancy by appointing outgoing member Tracey Antalek Everett, a proposal met with shouts of protest and derision from the small audience, including the three newly elected board members who take office on Tuesday, July 5. Everett ran for re-election in May and lost in the four-way race by a nearly 3-to-1 margin.

Zopf acknowledged that Everett had received the least number of votes “but she did get votes.” He went on to argue that “it is important to have continuity by having members with experience…. Having her here is better than having four new members.”

White retorted “that some people knew about this resignation and didn’t share it with the rest of the board is disgraceful.” He accused Zopf of attempting to engineer his own elevation to the board presidency to succeed Thompson, who did not seek re-election.

After a disjointed back-and-forth over procedure and the legitimacy of Munoz’s email resignation, Christine Galbo, an outgoing member, made a motion to table consideration of the vacancy. A four-to-four vote defeated that idea. So a roll call vote on the Zopf motion to appoint Everett proceeded.

Zopf, Frank Garnot and Everett (in what would otherwise be her last meeting, hoping to keep her position) voted yes. Galbo, White and Georgia Patchen voted no. Kenya Gadsden abstained. And then president Melissa Thompson, after several seconds of suspense, cast the deciding “no” vote, even though she had voted earlier not to table the issue and had argued “having eight members hampered the board time and time again.”

The defeat of the motion seemed to suck the oxygen from the room and the board quietly finished its business without further ado.

During the meeting, interim Superintendent Ann Marie Quartironi reported that additional search firms had responded to the board’s request for proposals and the board could move forward with selecting a firm and finding candidates. A new superintendent is not expected to be hired until the end of 2016, at the earliest.

Both Quartironi and Zopf warned during the meeting that there is no guarantee an acceptable candidate will be found. Zopf cited two unnamed area districts that failed to find candidates after a full search. In her parting comments, Galbo exhorted the board “to think outside the box” as it moves forward.