Frederic C. Rich says he became an environmentalist because of the Hudson River. In the 1980s, while looking for a place to settle, he returned to his childhood home in rural New Jersey. Once filled with farms, he found it filled with mega-mansions on one-acre lots. Its charm and character were lost.

His search for a home brought him to the Hudson Valley. He’s lived in Garrison, as well as in New York City, ever since. The move brought him in contact with a landscape that people had fought to preserve for many decades and he felt a responsibility to also protect.

“When I discovered this place, I was determined to help keep its character and environmental integrity,” he says. He became involved with Scenic Hudson, the Hudson Highlands Land Trust and the national Land Trust Alliance. For the past two years, since his retirement as a partner in the international law firm Sullivan & Cromwell, he has been writing and teaching. 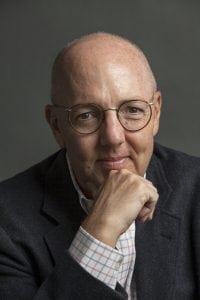 His new book, Getting to Green – Saving Nature: A Bipartisan Solution, presents a compelling plan to bring together people at opposite ends of the ideological spectrum to address the planet’s most dire environmental issues. He’ll outline his arguments, answer questions and sign books at 4 p.m. on Sunday, June 26, at the Desmond-Fish Library in Garrison.

Getting to Green covers the history of the environmental movement from a political perspective. He tracks conservative values from the 19th century to the present to demonstrate how the party used to stand for stewardship, conservation and preservation. He shows the moments when conservatives began to abandon these values and environmental action became a wedge issue between them and Democratic leaders.

He wrote Getting to Green to help Republicans find their way back to these values and to influence the environmental movement to change its ways. “It’s been my own conviction after 2010 that we will never able to take action on climate change on any other basis,” he says. “If we put all our eggs in the Democratic, progressive left basket, it would never get done. We just don’t have a politics that lets us move forward.” 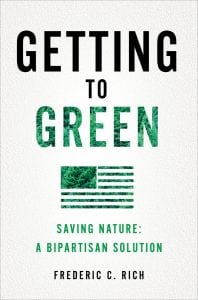 The book delivers on presenting a plan for “getting to green”: a world with clean water and air, reduced carbon emissions and land that is wisely used for the best interests of people and nature. Its second half presents methods for connecting to our best political selves. “People need to do something where they are face to face with neighbors,” Rich says. “Go to a town meeting, a climate-change workshop, engage personally and find out how to make a contribution. When you start to engage in a local place, it brings feelings of stewardship and then expands to a broader horizon. That’s the secret of rejuvenating the movement.”

Rich, who wrote the novel Christian Nation, which imagined Sarah Palin in the presidency, is currently working on more fiction. In addition to promoting environmental causes in the Hudson Valley, he created an expansive green-roof garden on his Manhattan apartment in Battery Park, which he chronicles at batteryrooftopgarden.org.