It was only fitting that Haldane High School principal Brian Alm spoke in terms of “passing the torch” at a school board meeting on June 21. School board trustees and senior administrators gathered that evening mainly to honor a number of retiring teachers and staff and to congratulate two newly tenured teachers. But they were also there to honor Alm, who is leaving after nine years as the high school’s top educator to become director of secondary teaching and learning at the Ossining Union Free School District.

“One of the coolest traditions here at Haldane is the annual passing of the torch,” Alm said. “We very purposely choose to join these farewells and welcomes, as if bookends; as retirees go, we congratulate our tenurees for becoming full time.” 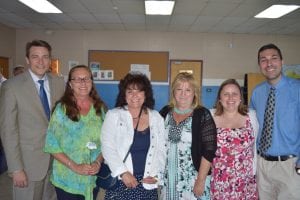 Superintendent of Education Diana Bowers commented on Alm’s departure. “He will be missed,” she said. “He has done a remarkably wonderful job for us. But it’s time and he’s ready. He’s at a point in his life where he needs to move to the next step. Although we are sad, we are also happy for him and we wish him well.”

School Board Vice President Evan Schwartz served on the committee that recommended hiring Alm. He recalled the group’s reaction after they had interviewed him. “As soon as Brian walked out that door we looked at each other and we knew had found the candidate. It was an instant connection,” Schwartz said. “What you’ve done for this district is … just extraordinary. You put Haldane on the map; you’ve done an incredible job. Congratulations!”

Michael Twardy, the district’s director of facilities and transportation, updated trustees on steps taken recently to improve parking, traffic and safety on and near campus after the school district and the Village of Cold Spring received complaints from residents in the Mountain Avenue and Locust Ridge area.

Twardy and board president Jennifer Daly both said that the situation improved noticeably after a meeting between Haldane’s building and grounds committee and the village parking committee headed by former mayor Anthony Phillips.

Among the improvements listed by Twardy: a parking lot near the district office was expanded from two to six spaces; an additional seven parking spaces were created on campus after a parking audit conducted by School Resource Officer Paul Piazza; traffic monitoring was initiated both at the corner of Morris Avenue and Craigside Drive and the traffic circle on campus; the Cold Spring Police Department increased its presence in the Mountain Avenue area during student drop off and pickup times.

In addition, Twardy said that a new 20 to 25-car parking lot will be created behind the high school. “We’re on the right track,” he said. Daly added that the crossing guard stationed at Craigside Drive has also indicated that he has seen a marked improvement in traffic flow since the new measures were instituted.

Twardy also provided a status report on electricity being generated on campus as part of an agreement with Monolith Solar. The solar energy project began producing power in July when the district office and garage went online, followed by the high school in September and the main school building in December. Twardy said the district has so far saved $2,076 in electricity costs and is coming into the most efficient energy- producing months. The system will continue to produce electricity throughout the summer, even when the buildings are largely not in use.

More than 950 solar panels were installed on the rooftops across the campus as part of the project. Monolith owns and maintains the $852,000 system as part of a 20-year agreement. The initiative cost the school district nothing. Monolith makes a profit by selling most of the electricity generated at Haldane to the national grid, while providing reduced electrical rates to the school district. The program is expected to reduce Haldane’s electrical bill by more than $21,000 a year.