Extended a commission by Dia Art Foundation to present her work, Isabel Lewis was immediately interested in two sites, spaces in Chelsea and in Beacon. Rather than restrict herself to one, Lewis chose both, and, for four consecutive Friday-to-Sunday weekends, beginning on June 24, she will preside over what she calls “occasions.” Lewis’s occasions will be hosted on Friday evenings at Dia:Chelsea and will continue to unfold on Saturday and Sunday afternoons at Scenic Hudson’s Long Dock Park located adjacent to Dia:Beacon. Though linked, with the train ride part of the connecting experience for those coming from the city, each can be visited independently of the other, for as little or long as one wishes, and re-entry is also possible with these free events. 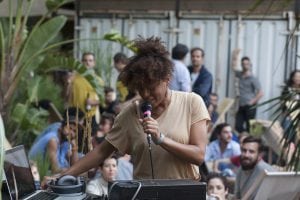 Isabel Lewis, at another of her ”Occasions”, this one at Tanz im August, Berlin, in 2015. (Photo by Vitali Wagner)

Lewis, a former modern dancer and choreographer, is an environment creator, and the elements of these new environments are to some extent fixed (an architect and a designer assist) but largely fluid, influenced by their geography and, most importantly, by those occupying the space, however transitory. According to Kelly Kivland, the associate curator at Dia Art Foundation who curated this series, the occasions are rooted in Lewis’ practices of dance and literature. According to press notes, Lewis’s work takes the form of social occasions that mark their own space between the formats of the exhibition and the theater. Conjuring at times the DJ set, lecture, party, and philosophical salon, her occasions engage the entire human sensorium. As host, Lewis’s dramaturgy is specific to the site, the guests, and their energies, encompassing dance, food, music, scent, and spoken address. All of the occasions offer an open duration, during which guests may freely enter, exit, and revisit.

Flowing up the Hudson

At Long Dock Park, this will translate into a demarcated area, which will contain furniture built for the site, a sound mix, and 16 or so trained contemporary dancers, positioned in and around the “zone.” Lewis will at times be orating, and will also circulate around the space, engaging in conversation. The aim, according to Kivland, is to “elicit a sense of relaxation, but highlighting the senses — to give everyone a moment of pause and awareness, particularly in response to current, contemporary, life. It’s about finding an alternative to technology for communication. A time of contemplation and gathering with each other … People can walk through and experience sound, the composition of the spoken address, the dancers and juices to highlight the palate — participating by “being.” There’s no forced interaction, though. It allows for experiencing things in a different ways and for an openness, while not downplaying the intellectual.”

The Chelsea site, a formerly empty warehouse in an industrial building located at 541 West 22nd St., will be home to a Lewis-created decorated environment with furniture, plants, and floral arrangements. In residence will be 30 to 40 social (non-professional) dancers, dancing the kizomba to popular Angolan music. Though dissimilar in many ways, each site is designed, yet improvised, responsive to the environment and people in it, and each is permeable, with people coming and going as they please, for any duration of time. Any experience, no matter the length, is viewed is as full experience. For those taking in both sites, it is conceived as a weekend, going from indoor Chelsea, then getting on a train to Beacon. Downloaded music will be provided to listen to on the train, and participants will be met at the Beacon Metro-North station by the performers, who will guide them to the site by an off-the-beaten-track pathway.

Dancing from the start

Lewis, who was born in the Dominican Republic, moved to New York City in the early 2000s from southwestern Florida  where she grew up. “She was immediately a prominent presence in the dance community, dancing for other choreographers and creating her own work,” Kivland relates. From 2004 to 2009 she presented commissioned dance work at venues such as Dance Theater Workshop, Danspace Project at St. Mark’s Church, Kitchen, Movement Research at Judson Church, New Museum of Contemporary Art, and Performance Space 122. “After five years, she had kind of done it all, and decided, in 2009, to move to Berlin. She had two sisters there, both in the arts. She pulled away from choreography and began to investigate other interests, drawing on her background in choreography and literary criticism. Most prominent has been the notion of “The artist as host, breaking the third/fourth wall,” according to Kivland. 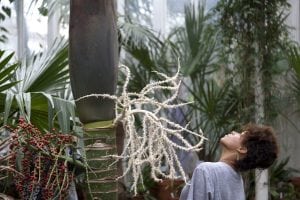 “Isabel Lewis’s occasions create an experience that activates a broad range of senses,” says  Jessica Morgan, Dia’s director. “Sound, dance, performance, and, in particular, durational work have always been part of Dia’s vision. Like previous commissions, this program is ambitious in both its scale and scope and requires a significant commitment of time and space. We are thrilled to work with Lewis to realize this commission across two sites that offer different temporalities and surroundings.” Kivland urges those interested to come along: “I feel strongly that it’s poignant and impactful when you’re there, in its simplicity.”

Occasions and Occurrences runs through July 17 as follows:

For more information, visit diaart.org/isabellewis. Reservations are optional for the Chelsea dates and are not required for Beacon.