Ed Currelley wants people to get serious about recycling — as in riding a bicycle, then riding one again and again. Currelley recently opened Cold Spring Bike Rental & Tours at 57 Main St. in Cold Spring.

There’s a story behind every business and in Currelley’s case it was happenstance. “When we moved up here last year, I noticed there weren’t many bikes,” he told The Current. “My wife said ‘Why don’t you do something about that?’ ”

So he did. He opened in May as a one-man operation and hopes to soon add two employees.

Currelley is no stranger to business. “I studied business at Columbia University and was general manager of a large Manhattan corporation for 16 years,” he said, adding that his résumé includes such other ventures as hotel management and producing for television and music concerts. He also currently works in special-event planning in New York City. He and his wife Serena split their time between the city and Cold Spring. 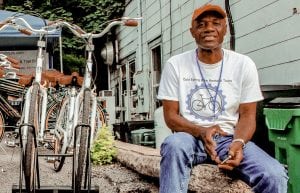 Running a village-based business is definitely “more hands on” than the corporate world. “It’s fun because you get to know your customers, your neighbors,” he said. “You get to know who makes things happen in this small town. You can make a significant difference by doing something small in a small town; it isn’t like in the city where you’re just a grain of sand on a beach.”

The rental shop is open from 8 a.m. to 8 p.m. from Thursday to Sunday, with the last bike out at 7 p.m. Renters must be 18 years of age with proper identification or be accompanied by a parent. Rental rates are $17 an hour or three hours for $45. Full-day packages are also available starting at $70. Helmets are included with each rental.

The enterprise features a fleet of 20 three-speed Kent bicycles, a model Currelley feels is ideal for local riding. “The fewer bells and whistles, the fewer moving parts the better,” he said. “You want a secure bike that a novice can use; a safe bike, one that can navigate the hills here.” More complicated, high performance, multi-speed bikes wouldn’t be suited to most renters he said. “Most people who rent don’t know anything about bikes – they just want to ride. Simple is good.”

Currelley may not have been a bicycle mechanic before, but he achieved that status quickly. ”I’ve gotten to know the bikes very well,” he said with a laugh, explaining that they arrived unassembled, giving him the “opportunity” to put all 20 bikes together piece by piece.

Renters are required to sign a waiver, although Currelley said his is unusual in a good way. “Most bike companies such as in Manhattan have a waiver that releases them from all liability. We stand behind our bikes,” he said.  “Basically you sign saying you won’t do anything foolish – such as drinking or taking drugs. But we will repair the bikes; it won’t come out of customers’ pockets.” Renters are also covered for up to $5,000 in medical expenses in the event of an injury. “That’s something we offer that most rental companies don’t,” Currelley said.

In addition to rentals, guided tours will be offered for groups of five to 10 riders beginning in late June or early July. Currelley also plans to offer mountain bike rentals and guided tours.

Currelley said he was surprised to learn that many residents have never experienced the village by bicycle. Visitors however, view the prospect differently. “Out-of-towners love it,” he said.  “They come in without expectations – they just want to know the best places to go.” 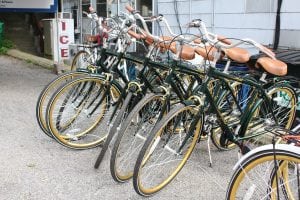 While he encourages renters to explore Cold Spring, he doesn’t advocate long trips. Instead, he recommends cycling to such sites as Little Stony Point, Dockside Park, the Foundry Preserve, the Putnam History Museum and Cold Spring’s neighborhoods. “There’s a lot to see here,” he said. He acknowledges that safe travel requires drivers and cyclists alike to be aware of each other. “Bicycles share the road with vehicles. Hopefully bikes will be become part of the fabric of Cold Spring.”

And the Fjord Trail? “I can’t wait,” Currelley said. “It’s going to be a good thing for Cold Spring; a man-made trail will really enhance what the village has to offer.”

Currelley said he looks forward to fall visitors who come in search of autumn colors. “If the season is anything like last year we hope to go straight through the second or third week of November,” he said. He has reached out to the operators of Seastreak, the cruise line that brings hundreds of weekend visitors to the village throughout the fall. Boat passengers will receive a discount rate. “Their short three-and-a-half hour stay will be conducive to bike rental,” he says. “It will allow them to see more. If we get even five percent of Seastreak visitors, that’s a lot. “

Currelley said the village was very cooperative as he worked to open his business. He singled out Building Inspector Bill Bujarski, who he said went “beyond the call of duty” in helping him get started. “He was really supportive and that made a big difference.”

3 thoughts on “Pedaling Around Cold Spring”