The sound of jackhammers has ended on Main Street. At the June 28 meeting of the Cold Spring village board, Deputy Mayor Marie Early reported that construction is “substantially complete” on the Main Street Project, at least on the thoroughfare. Landscaping, tree planting and lighting improvements are all that remain to be completed. 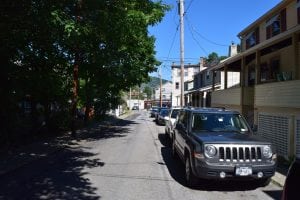 Major improvements will be made to Furnace Street. (Photo by M. Turton)

The last component of the project — extensive improvements to Furnace Street —  will begin after Independence Day. The work will include drainage improvements, repaving the street and installation of new sidewalks and curbs. The overall project has been running on or ahead of schedule and is on track to be completed by the end of summer.

The trustees authorized Cold Spring Mayor Dave Merandy to sign a letter of intent with the Town of Philipstown to share building department services. The move anticipates a possible merger of the departments. In recent months, the town’s code enforcement officer has served as village building inspector on the Butterfield Project.

The project to remove toxic coal tar from the site of the Cold Spring Boat Club is now substantially complete, Merandy reported. Final grading, landscaping and fencing is scheduled to be finished by July 8.