Omar Harper, the Beacon City Council member who represents Ward 2, is quick to tell folks that he’s not much of a politician. A Beacon resident since the age of 10 (he’s now 33), the first-time councilperson for the riverfront  and linked areas says he instead attempts to bring an old-fashioned sense of values to the council.

“I came up here from the Bronx,” he recalled while walking through Pete and Toshi Seeger Riverfront Park. “My family tried to get me a better fit. There was a lot of negativity on the block I lived on and they were trying to get me away from that element. So, I think I bring a little bit of a different perspective.” 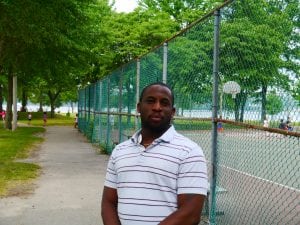 Harper was unsuccessful in his first bid for the council in 2013 but unseated longtime Ward 2 councilperson Charles Kelly last year. Now six months into his first term of elected office, what are his impressions of city government?

“My mother always taught me that if there’s a problem, you try to find a way to resolve it, and if you have to, you find a way to compromise,” he says. “That’s the mindset I bring when I’m sitting up there. You’re never going to make everybody happy, but you don’t want anyone to feel shafted.

“Being able to have that thought process is huge. Everybody wants what they want, but you have to look at both sides of the coin, even if it’s different than what I believe personally.”

Harper admits he rarely rests. In addition to work and the council, he spends time either with his family or volunteering as a coach for local youth basketball and wrestling squads.

“The [new] afterschool program [at Beacon’s elementary schools] is going to be huge for our younger [kids], and that was something that was missing for Beacon,” he says. Thinking back to his own experiences in an afterschool program at the old Beacon Community Center, Harper believes the upcoming partnership between the city and the Beacon school system, which begins a trial run in September, will fill a critical need.

“I was there in the mid-90s getting help with homework and staying out of trouble,” he says. “The next focus needs to be the transition age — sixth to eighth grade. That’s where you can start to lose them. Being able to give [those kids] something to grasp onto would be huge.”

Harper speaks often of family, calling his mother his best friend and drawing frequently on values instilled in him as he grew up. While he believes Beacon is relatively safe for children — certainly compared to the block he lived on in the Bronx — an even greater sense of community could be helpful if and when those negative elements creep in.

“My parents had the mentality that it takes a village to raise a child,” he says. “If you were a parent on my street and I’m acting up, you were allowed to tell me I was wrong. We could maybe use a little bit more of that, the understanding that no one wants to see the youth fail.”

Ward 2 includes much of Beacon’s riverfront as well as most of the city’s river-to-Main linkage zone, which has been the subject of considerable debate lately. While walking along the river, Harper says he sees both sides of the linkage issue, which revolves around whether dense residential development is appropriate for certain neighborhoods within the zone.

Housing is obviously important, he says, but he doesn’t believe the city’s growth should proceed without limits.

“I think we have to err on the side of caution as far as the density,” he says. “There has be an understanding of working within parameters yet compromising. Housing is something that we need. It’s a positive that Beacon is attracting development, but you don’t want it to be out of control, either.”

One thought on “Walking Ward 2 in Beacon”