A workshop on June 27 gave the public a chance to weigh in on their preferred design for the Breakneck Connector, the first leg of a proposed nine-mile Fjord Trail that will link Cold Spring and Beacon while providing a safe route to Breakneck Ridge for hikers, cyclists and pedestrians. About 75 people attended the session, which was facilitated by Amy Kacala, senior planner with Scenic Hudson, the agency acting as project manager. 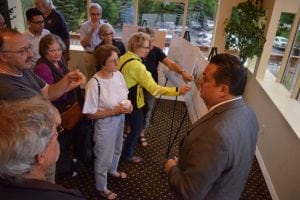 Those present were asked to vote for one of three designs (Photo by M. Turton)

The workshop, held at Chalet on the Hudson, focused on the half-mile section of trail that will run from the Metro-North whistle stop north of the Breakneck tunnel to the trailhead. The proposed path will be 12-feet wide and include two elevated, railed sections with one segment built at grade. The length of the Breakneck Connector will be located on the river side of Route 9D.

Attendees attached comments on sticky notes to indicate what they liked and what they would change in three potential designs: Rustic Outdoors, Scandinavian Fjord and Rustic Industrial. Participants also were asked to vote for the design they preferred.

A small welcome center located near the tunnel is an integral part of each design. Samples of materials to be used in the trail’s construction were also on display. While the evening dealt only with the Breakneck Connector, Kacala indicated that comments from the session will influence the design of the entire Fjord Trail.

Kacala and Rob DeGiorgio of D&B Engineers and Architects described parking improvements proposed for the Breakneck area. Kacala characterized the current situation as “parking chaos” brought about by high volumes of pedestrian and vehicular traffic, a limited land base and an ever-increasing number of visitors. Limited security features on the Metro-North property near Breakneck were also identified as a safety concern. 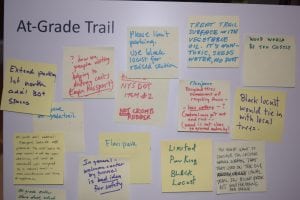 Participants used sticky notes to comment on plans for the Breakneck Connector. (Photo by M. Turton)

The number of visitors to Breakneck increased from 75,000 in 2014 to more than 80,000 last year and is expected to increase again this year, Kacala said, spurred on in part by social media. Over Memorial Day weekend, the hiking area attracted 3,000 visitors.

The proposal calls for 135 parking spots north of the tunnel, including marked, parallel spaces on both sides of Route 9D. The existing parking lot north of the tunnel on the west side of 9D would undergo extensive improvements, including an area for emergency responders who are called upon to rescue injured and lost hikers. The new parking lot will also include a designated drop-off spot for the trolley that makes runs between Cold Spring and Beacon during the hiking season. 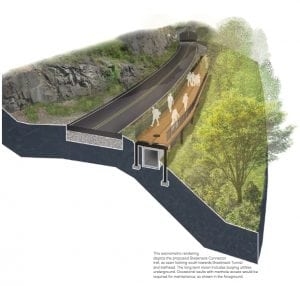 A rendering of the proposed Breakneck Connector, as seen looking south toward the Breakneck Tunnel.

While the parking improvements would make more efficient and safer use of the available space at Breakneck, they would not reduce the traffic problem. Steve Smith, chief of the Cold Spring Fire Company, who attended the workshop, observed that on busy weekends 300 to 400 cars park along Route 9D between Breakneck and Cold Spring. Kacala said that bids are being solicited for improvements to the parking lot at the Washburn Trailhead opposite Little Stony Point. The capacity of that lot will be doubled to 55 spaces, with the lot targeted to be ready by October.

During the question-and-answer period an audience member asked why the speed limit along Route 9D at Breakneck could  not be reduced from 55 miles per hour. Kacala said that the commissioner of New York State Department of Transportation plans to visit to Breakneck to see the situation for himself, but added: “You can’t just reduce the speed limit. People will still speed.” Instead, she said, traffic slowing measures such as bump outs and more clearly defined parking can be used to create a sort of “friction” for vehicles passing through the area. 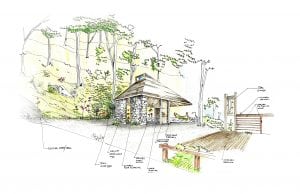 A welcome center will be located near the Breakneck tunnel. (image provided by Scenic Hudson)

“You want to create a slower environment,” she said. “It has to ‘feel’ slower to drivers. A reduced speed limit is more likely to be considered after such measures are in place. Kacala also said enforcement is an issue, noting that as many as five law-enforcement agencies are involved at Breakneck.

Another attendee voiced concern about poor visibility inside the tunnel. “You can’t see!” she said. Kacala said that the state DOT is investigating lighting and other ways of improving visibility. The agency “really is at the table” for the Breakneck project, she said.

Planners will now consider comments received at the workshop before selecting a design for the Breakneck Connector. Kacala said design revisions will be available for review and comment at hudsonfjordtrail.org. Preliminary signage will be installed in July and construction bids will be timed so that work can begin in the winter to reduce disruptions to wildlife.