Invasive species in our landscapes and waterways threaten biodiversity of ecosystems, public health, property values and recreational pursuits while taking a lot of money to manage. A Cornell University study estimated in 1999 that this biological pollution causes nearly $138 billion a year in environmental damage and losses in the U.S., or nearly $200 billion in today’s dollars.

A walk through any of our local forests and probably your own yard makes it easy to see the problem — Japanese barberry, mugwort, Oriental bittersweet, garlic mustard, multiflora rose — these plants dominate. In the Hudson River, water chestnut and phragmites have taken over many areas. 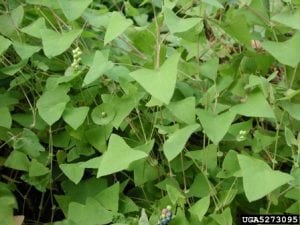 The good news is that efforts to root out invaders before they can become established are well coordinated and becoming more visible, and more resources are going to controlling invasions in places that have rich biodiversity, and recreational or economic value. Our area is particularly important for detecting invasive species as a pathway for anything moving upstate. Invasive species like to settle here and continue north.

Partnerships for Regional Invasive Species Management (PRISM), funded by the New York State Environmental Protection Fund, has eight regional chapters, including one in the Lower Hudson, that award grants (nyis.info). The money goes to tracking and stopping the spread of invasive species on land and in water and is focused on plants, although animals are problems, too. Cornell Cooperative Extension (CCE) Putnam County is one of the groups that has received a PRISM contract to recruit and train citizen scientists to map the distribution of a targeted list of 38 invasive plants. 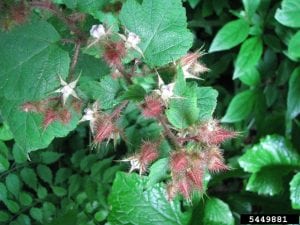 “The focus is to get baseline data so that we and other organizations can allocate our resources more wisely,” explains Jennifer Stengle, the resource educator at CCE Putnam. “We’ll be doing education and outreach to the public, green industry professionals and municipal officials. We need to know where exotic species are or are not.”

Stengle will lead a training session for volunteers who would like to participate in the survey at 3 p.m. on Tuesday, July 5, at the Desmond-Fish Library in Garrison. Visit putnam.cce.cornell.edu to register. The Dutchess County CCE will hold training sessions on July 9 and July 12 in Millbrook (ccedutchess.org). Volunteers can use a smartphone or GPS unit to log information about where the targeted list of plants are found in the county.

Once more information is collected, areas can be targeted for removal and control. The New York-New Jersey Trail Conference has an Invasive Strike Team coordinating these efforts and is working in Putnam to remove giant hogweed, a plant that causes severe rashes and skin reactions that can last for months. 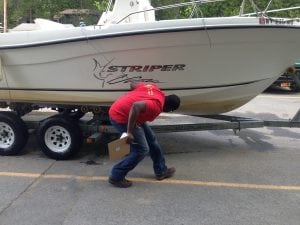 A Clearwater steward looking for invasive species trespassers on a boat before it goes in the Hudson River. (photo provided)

The Hudson Highlands Land Trust has also received PRISM grant money, which it is using to create a phenological database. “We have created a Google form that PRISM volunteers and interested citizen scientists can use to record sightings of invasive species, including what stage they’re in their growth cycle (budding, flowering, etc.) and management tips,” explained Kathy Hamel, outreach and public policy manager at HHLT. She said the resource will be available to anyone who wants to control invasive species on their property.

The Hudson River Sloop Clearwater in Beacon will be leading aquatic efforts. Its PRISM grant funds a program to inspect watercraft entering the Hudson River at Newburgh, Staatsburg and Haverstraw. Many species come into the river from boats that were on other waterways. Samantha Epstein, the invasive species coordinator for Clearwater, said that as many as 10 percent of the boats it inspects carry a trespasser. The organization also has launched a public awareness campaign to remind boaters to clean, drain and dry their craft each time it comes out of the water.

Other funds support a Clearwater program to train volunteers to detect and track a priority list of eight aquatic species. Hydrilla, a plant that can live in brackish or freshwater, has been found in Croton River. Epstein leads weekly trainings for volunteers; the next is scheduled for July 7 at Black Rock Park in Croton. See clearwater.org/aquatic-invasive-species.

Other events during New York’s Invasive Species Awareness Week (July 10 to 16) include a mugwort removal workday organized by Scenic Hudson on July 13 at Long Dock Park in Beacon (scenichudson.org) and an invasive species walk at the Cary Institute of Ecosystem Studies in Millbrook on July 16 (caryinstitute.org).

One thought on “Roots and Shoots: Call to Arms — Fight the Invaders!”