Creating a space which invites people to pause and ponder

Jayoung Yoon’s show at Theo Ganz Studio in Beacon is called Ephemerality, yet in it and in her work as a whole, she captures ephemeral moments and makes them tangible. Raised in South Korea, Yoon relocated from New York City to Beacon not long ago, wishing to infuse her life with nature, as the natural world is the basis for her work.

Last week, in an artist’s talk delivered to a packed room, Yoon focused on the cerebral, the ideas behind her work, rather than its equally intriguing methods of construction: Yoon works with human hair, her own, creating abstract and non-abstract sculptures, paintings, and videos. 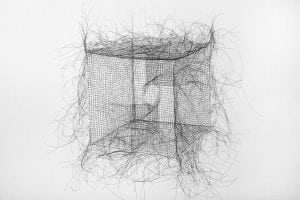 Theo Ganz Studio director Eleni Smolen introduced the talk by noting that this was the first show in four years that gallery staff did not install, due to the nature of the work, which is both delicate and commanding in structure; Smolen noted that it took two days for Yoon to install, in what is a small space. Calling Yoon a “powerhouse of talent — she covers a lot of categories,” Smolen mentioned Yoon’s most recent academic achievement, receiving an MFA in fiber arts from Cranbrook Academy of Art in Michigan. She also has an MFA in painting from Hongik University in Seoul.

Smolen suggested the audience delve into Yoon’s website, which she described as containing “a luminous body of work, magnificently archived.” The site does, indeed include documentation of all of the media Yoon works in, and also includes a number of her videos.

Press notes for the exhibit explain that it was at Cranbrook that Yoon first started to use human hair as a medium in her art work; “she spends countless hours hand-knotting strands of her hair, a tactile symbol of the spiritual and physical realms.” Yoon creates shape sculptures from the hair, some existing independent of anything else, suspended from above, others more formally representative of real objects: a crown, a skull, a glove. 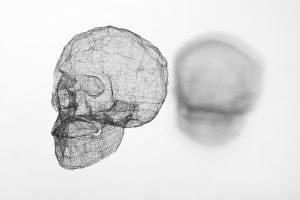 She then contextualizes some of these objects: the glove surrounds a hand, the skull, resting, then rising from a bed in one of her videos, embodies her thoughts. Sometimes the abstract sculptures actually stand in formally for her thoughts: in one video, a cone-like mass, symbolizing her thoughts, rises from the top of her head, much as thoughts enter and exit the brain.

Yoon was shaped by an upbringing which included eclectic influences (Christian, Buddhist and Pungmul, a traditional Korean ritual music, and Salpuri, a shamanistic healing dance her mother used to perform as a therapist and teacher). Traditional Korean embroidery with colorful threads and hand sewing were passed down to her, too; Yoon was taught the craft of repairing clothing and socks and making winter sweaters and scarves. “Threads were part of my aesthetic consciousness,” she explains.

“I make sculptures and combine them with video and performance to heighten perceptions of space and time,” Yoon stated in her talk, continuing, “When I was young, around fifth grade, I had an experience which made me very discouraged and frustrated. I asked myself ‘Why did this happen?’ This feeling is so universal. In college, using oil paint, I made images of traumatized female figures. My parents got worried and sent me on a retreat. There I was introduced to forms of spiritual practice, questions and answers … I found that I had lost the ability to be present. After a couple of years I became interested in a diversity of spiritual practices.” 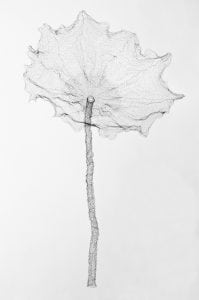 Yoon described her earliest work as “the building of invisible space, transforming negative memories to positive ones.” Shifting to working with human hair combined the physical and spiritual properties of it. “Physically, it lasts after death, and becomes an appropriate symbol of remembrance.” Gallery notes provide a further explanation from Yoon on why and how she uses the material she has chosen:

“Human hair, at once tactile and ephemeral, has become my visual nexus for the intersection between the physical and spiritual realms. As a material, hair is intimately corporeal and focuses the viewer’s attention on the body. As it grows, hair represents the accumulation of time. Weaving and knotting the hair by hand instead of using machinery creates unique, organic shapes both in the details and in the larger form … The hair fibers move organically from the airflow created by a viewer’s movements and from the environment. Those small movements in space, on an intricate scale, shift the awareness toward subtle perceptions that are often taken for granted.”

Yoon’s attendance at many residencies in recent years has geographically shaped the components of some of her newest works. At one located in Maine, she constructed an outdoor space with a cut-out circular hole. She lay on the floor of the space for nine hours, while video documenting the changing light patterns. Yoon then took the footage, and compressed it to three minutes, altering the perception of time, sun and shadow. 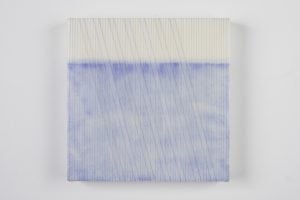 At another residency, she created egg-shaped pottery vessels, each the size of her own body when curled into a fetal position. She arranged them, in the snow, into a clock-like circle, representing the passage of life. The endurance required to “perform” in the video was “a cleansing experience for the body and mind,” Yoon explained.

Yoon herself appears in most if not all of her videos. In them, she is usually seen with her head shaved, without clothing, back to the camera, facing a white or grey emptiness in a meditative state. Calling the videos “ritualistic meditation ceremonies,” she says. “I’m embodying the detachment from gender, culture, thought, and ego.” In her talk, Yoon noted “My non-displayed appearance invites you to inhabit my body.”

Although raised in a Christian community in Korea, Yoon became interested in Buddhism there, but found the practice dominated by “a long history of complicated festivals and ceremonies. Here [in the U.S.], it’s more of a daily practice. Yoon calls herself now influenced by many spiritual practices; she is also “impacted by Butoh performance.”

With all of her work, Yoon is interested in “creating a space which invite peoples to slow down and pause. That’s why I use a lot of white: snow, salt, white sand, white eggshells … I like to convert space into something intimate and contemplative.” Yoon’s most recent work has involved “memory boxes.” In one, a thorn is wrapped with hair and represents a painful memory. “Memories are altered by our perception, and perception changes our memories.” 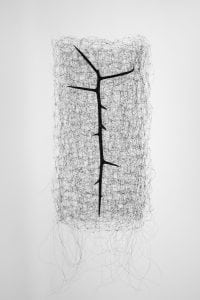 Ephemerality runs through July 10, including Second Saturday, July 9. Theo Ganz Studio is open Friday to Sunday from 12 to 5 p.m. (longer on Second Saturday) and by appointment. The gallery is located in Beacon’s west end at 149 Main St. For more information visit jayoungart.com and theoganzstudio.com or phone 917-318-2239.

One thought on “Jayoung Yoon at Theo Ganz Studio”