For the Scheherazades and Garrison Keillors among us, the spinners of yarns, the tellers of tall tales, a pulpit of sorts awaits you: Butterfield Library’s new Dragonfly Story Hour, a series of evenings for friends and neighbors to recount without notes a nonfiction story from their own lives, for up to four minutes.

The first of the “story slams” took place a few weeks ago, when four intrepid residents of Philipstown and Beacon spoke to a crowd of about 20. The second will happen on Friday, July 22, at 7 p.m. Butterfield’s Luanne Morse, the head of adult services, is hoping to build upon the success of the first, drawing more readers (first-timers will be given priority) and a larger audience. Readers must be at least 18 years old. 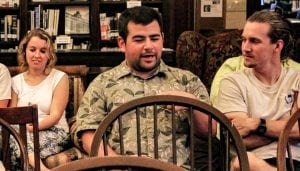 The first storyteller, Aaron Donato, responds to audience questions about dares he took as the end of the Mayan calendar approached — just in case.  (Photo by Anita Peltonen)

Morse has previously organized Writers Reading at the Library, which each year features a nonfiction author, a fiction author, a playwright or two, and poets. She wanted to expand the series and thought storytelling would be a good fit. Modeling the series on National Public Radio’s program The Moth (hence the similarities in name) and “Story Corps,” Morse thought the library should give it a try. As far as she is aware, Butterfield is the first in the Mid-Hudson Library system to offer storytelling in this format.

“In this information and digital age, it is refreshingly basic to have someone standing in front of you recounting events in their life that often had far reaching implications for the storyteller,” Morse says. “Hearing these local voices is a fascinating way to learn how people navigate their way through life’s situations. Done this way, storytelling is very powerful and immediate and really puts on display how complex the human experience is…. I find there is an emotional immediacy and an added complexity that is unique to nonfiction storytelling.”

Butterfield staff member Anita Peltonen moderated the evening and said that she is pleased the series is continuing because “the feeling of community was extraordinary at the library that night. It seemed like people had a hunger for this kind of opportunity. Some told stories they’d never told before.” 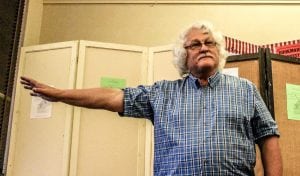 Holding off older bullies that invaded the town pool was the theme of Mike Turton’s childhood remembrance.  (Photo by Anita Peltonen)

In her welcoming remarks, Peltonen noted: “Everybody loves listening to a good story. It’s harder, perhaps, to tell one or write one. In fiction, if something is awkward, you can whiff — you can make stuff up. A true story doesn’t have such handy workarounds. That’s why we’re so happy you’ve taken on this just-for-fun challenge. P.S. You’re among friends.”

Peltonen described telling a story to others as possibly revealing something about yourself you’ve never revealed, or “maybe reclaiming a part of yourself that had gone missing …. Without the love of storytelling, humankind may never have had the desire to invent the written word … and look, here we are at the library, in a room filled with books.”

After drawing names from a hat, the first storyteller up was Aaron Donato — “originally from Brooklyn, now from Cold Spring” — who told a story about the things he dared to do on the day the Mayan calendar was supposed to bring about the end of the world in 2012.

Donato said he had “to conquer some nerves” to tell his story, which was about a road trip to Atlantic Canada. “In the end I had a wonderful time and was happy to meet some very cool people from the community,” he said. “As I am new to the area, the storytelling hour was a nice icebreaker for Cold Spring and a fun opportunity to make some new friends.” 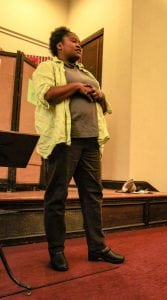 As a young dancer, Beacon’s Twinkle Burke shared memories of an audition that included a wardrobe malfunction. (Photo by Anita Peltonen)

Following Donato was Mike Turton, a reporter for The Current who has been known to regale listeners with a good story or three. Turton sees as an antidote to how information is shared nowadays.

“People don’t spend time face-to-face, or even on the phone anymore,” he said. “Even writing is less human because there is less interaction. This is a sharing of what’s going on or has gone on in someone’s life. And you can intuit so much by hearing someone’s voice and seeing their face as they speak, especially one-on-one in a very small setting; there’s a real connection between the audience and the person telling the story. For the storyteller, because you can’t use notes, it becomes more candid and very real because there’s no chance to edit — it’s editing on the fly.”

Turton pointed out that Jonathan Kruk, a professional storyteller who lives in Cold Spring, was in the audience, and that Kruk, despite his long experience, once said he found it very hard to tell a personal story, rather than using the voice of one of his characters. Turton thinks Dragonfly is perfect for this area. “Every community has stories — this one has tons.”

Cold Spring’s Gordon Duggan has had a lot of practice listening to people talk about themselves — he’s a therapist. He thought being on the other side of the couch, so to speak, would come naturally, “I’m Irish, I love telling stories,” he says. 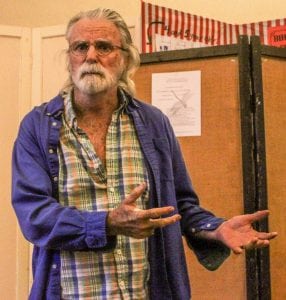 Gordon Duggan tells his story about life after Vietnam. (Photo by Anita Peltonen)

What happened to him as he spoke of his difficulties getting into college, was unexpected: “I love listening to The Moth and as soon as I heard about this I loved the idea. But when I started telling my story, the emotions became overwhelming, my legs were shaking. What I told was very different from what I had planned. After I sat down my back went into a spasm. My personal experience was mind-blowing in actually doing it; there’s a connection which takes place with the audience.”

Despite the unexpected, Duggan’s up for more: “It was a whole different ballgame from what I expected. Nobody could be more of a wreck than I was, and yet here I am, ready to go again!”

Twinkle Burke of Beacon closed out the evening, describing the competitive challenges of being a young dancer, replete with reference to a major wardrobe malfunction that occurred in her dancing youth.

Afterward, audience members were invited to ask questions or make comments. According to Peltonen, “there were tears and laughter along with snacks and wine. People asked for another, and now thanks to Luanne Morse and library director, Gillian Thorpe, we’re going to do it again July 22. We hope people come both to tell and to listen.”

If you have a story that takes four minutes or less to share, Butterfield is looking for eight participants for July 22. Send an email expressing your interest to Morse at [email protected] with “Dragonfly Story Hour in the subject line.