As part of its ongoing Our American History series, the Putnam Valley Historical Society will host a presentation at 10 a.m. on Saturday, July 9, on the sinking of the USS Indianapolis in July 1945 after it was hit by two Japanese torpedoes. The ship was returning from delivering to a U.S. base the enriched uranium and other components for the atomic bomb that would be dropped on Hiroshima. 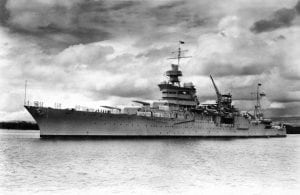 Michael Bennett and John Fiorella, who have both done extensive research on the subject, will share details of the attack in the Philippine Sea and the harrowing five days that followed, during which 900 surviving crew members waited in the Pacific for rescue, battling thirst, hunger, exposure and sharks.

The free program will take place at the Putnam Valley Grange Hall at 128 Mill St., Putnam Valley. A Hollywood film about the sinking, USS Indianapolis: Men of Courage, starring Nicolas Cage, is scheduled for release this year.